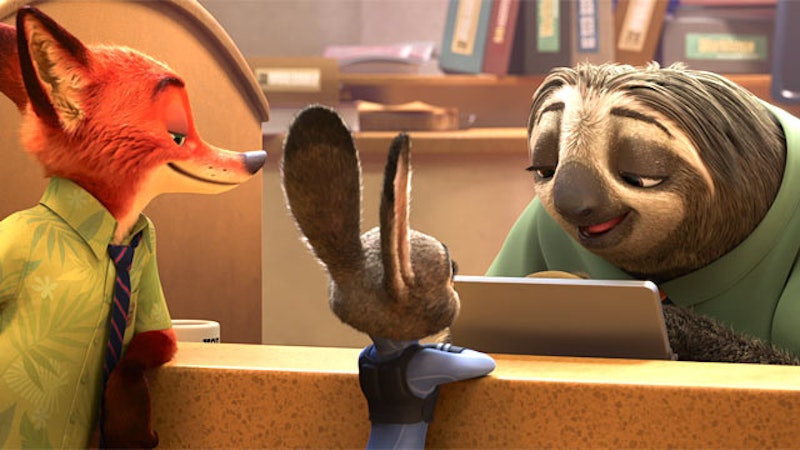 Shakira's back, people! Though she might not be on this season of NBC's The Voice, the singer with the hips that just don't quit has a new single out called "Try Everything." The new Shakira song is for Zootopia , with the singer's original track featured in Disney's latest animated feature about a city of, you guessed it, animals. "Try Everything" is pretty much what you'd expect from an animated movie song: it's upbeat, has a positive message, and features incredibly bubbly and clear lyrics. "Don't beat yourself up / Don't need to run so fast / Sometimes we come last but we did our best," Shakira sings on the track.

Not only did the singer lend her vocals to the new Zootopia song, she also lent the film her voice talent as an actor. For Zootopia, Shakira traded in her famous hips for some animated ones to play Gazelle. Gazelle is, of course, a gazelle, who also happens to be Zootopia's top pop star. But, Gazelle doesn't just have Shakira's famous voice — according to E! News, the singer suggested to filmmakers that her character look more like her real self and have a bit more of a curvy shape after seeing early sketches for her character. "I suggested to them to give her a little more beat, because she was a bit too skinny. She was too fit. She needed to be curvier," Shakira told E! News.

The singer isn't the first artist to perform in an animated feature, or lend her voice to create an original song for an animated film. Here's where "Try Everything" ranks amongst a few other recent animated movie songs. (Note: for the purposes of this exercise, animated musicals, like Frozen, were disqualified. Because let's be honest — they would just win everything.)

1. Tegan And Sara Ft. The Lonely Island — "Everything Is Awesome!!!"

"Everything Is Awesome!!!" from The Lego Movie is probably one of the best original songs for an animated film (non musical) ever. It was nominated for an Oscar for a reason.

Pharrell's song on the Despicable Me 2 soundtrack, "Happy" was so good, Meryl Streep shimmied to it at the Oscars. If that isn't the height of animated movie original songs, I don't know what is.

Shakira's "Try Everything" might not be the next "Everything Is Awesome!!!" but it sure is great. I wish you luck getting it out of your head.

Like Shakira, Rihanna pulled double duty on her film, Home, acting in it and providing original songs for the soundtrack. "Towards The Sun" did well on the charts, but wasn't as massive as Rihanna's other hits. Still, it's Rihanna, so, it's pretty good.

Owl City's original song for Disney's Wreck It Ralph featured some of the film's animated characters in the adorable live action music video.

Cody Simpson sang "La Da Dee" for Cloudy With A Chance Of Meatballs 2, and, in doing so, stole hearts around the world.

With every great animated movie, it seems, comes an equally great tune to get stuck in your head.

More like this
Taylor Swift Calls Dwayne Johnson "The Man" After Revealing New "Taylor's Version" Song
By Jake Viswanath
Yes, You Do Know The Song From The 'Black Panther: Wakanda Forever' Trailer
By El Hunt
Everything You Need To Know About ‘Black Panther: Wakanda Forever’
By Bustle Editors and Radhika Menon
Britney Spears & Sam Asghari Called Out Kevin Federline’s Claims About Her Kids
By Grace Wehniainen
Get Even More From Bustle — Sign Up For The Newsletter