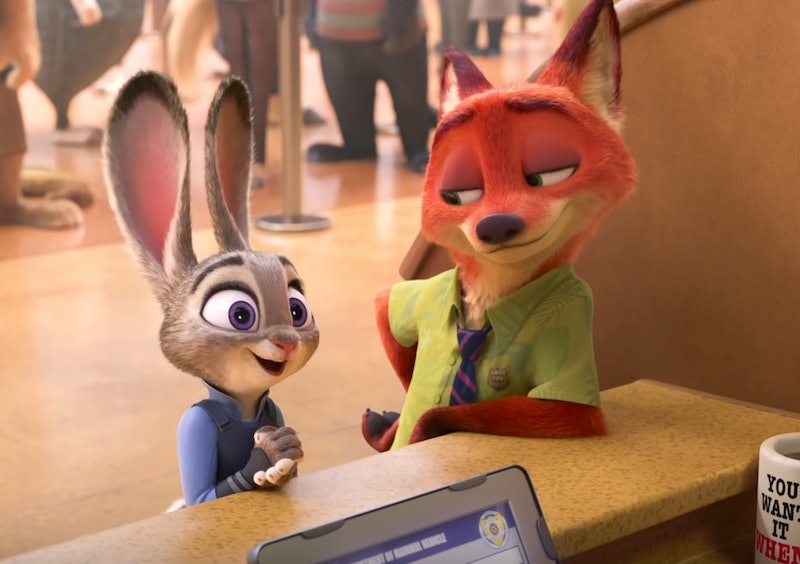 If you saw Star Wars: The Force Awakens, then odds are you've seen the trailer for Zootopia , Disney's newest animated film. The trailer, however, didn't reveal much about the family film, other than an incredibly funny gag involving a sloth hearing a joke. Here are the basics of what we know so far: Zootopia is a place where animals dress, act and operate like humans and a spunky bunny cop teams up with a smart-mouthed fox to help solve some sort of crime. Sounds pretty vague, huh? Well, Disney has released another trailer that actually reveals a bit more about the plot and the tone of the movie, and it explains what Zootopia is actually about.

Zootopia follows rookie cop, Judy Hopps, the first bunny cop in the history of Zootopia. Judy, as voiced by Ginnifer Goodwin, rubs her colleagues the wrong way with her enthusiastic attitude, and they discount her as the "token bunny." So, Judy goes out on her own, enlisting the help of Nick Wilde, a fox voiced by Jason Bateman who was witness to a crime, to attempt to close a major case. In short: Zootopia is shaping up to be the perfect feminist follow-up to Disney's massive hits Frozen and Inside Out.

At the heart of Zootopia is a story about friendship — one so touching, it brought Goodwin to tears. "I cried when I read the script and I cry in our sessions, because I think that the friendship between these characters is really beautiful," Goodwin said in an interview with Legion of Leia at Disney's D23 Expo. Goodwin added that the friendship is made even better due to the fact that the bunny and the fox are not in a romance, saying, "And it's not a friendship based on any romantic undertone either. It's just a genuine, pure, combative, opposites attract friendship."

Marketed as an animated buddy cop movie, Zootopia will feature some of those classic buddy cop tropes, all while winking to famous films of the past. The trailers feature callbacks to The Godfather and references to iconic films that are sure to fly right over the heads of any child viewer. In fact, Disney has been marketing Zootopia for adults with funny, animal spoof posters of Hollywood hits and album covers.

The movie, which opens on March 4, will probably also draw in audiences with its all star cast. J.K. Simmons, Jenny Slate, Katie Lowes, Octavia Spencer and Idris Elba all voice characters in the film. "I can't say I ever even dreamed of being a buffalo before. But now that I am one, I'm very excited about it. And I grabbed the part by the horns," Elba told the Chicago Sun Times of playing the buffalo police chief Bogo. Shakira also has a role in the film, playing Gazelle, Zootopia's biggest pop star, and has released an original song for the film, "Try Anything."

Zootopia probably isn't going to be the next Inside Out — or the next Frozen for that matter — but, the more I learn, the more intrigued I am to go to the zoo.