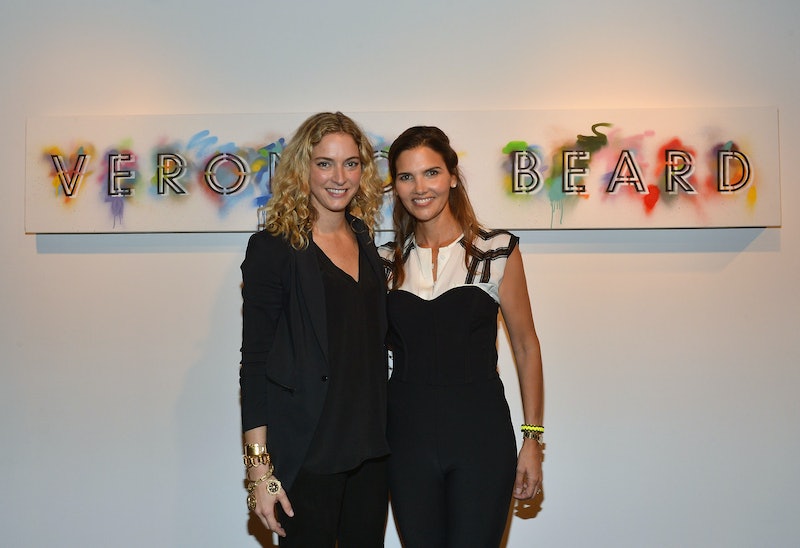 Last season, Fashion Week became something of a circus; producers and attendees fired off a series of complaints over late shows, long lines, and over-scheduling. Regardless of the headaches and the excess, the palpable excitement for new designers remains. The prospect of the new Michael Kors. Someone who emerges with an essential piece like a DVF wrap dress or leather leggings like Helmut Lang. While Fashion Week launches some surprise stars out of obscuirty, there are a few up-and-comers who are already on our radar, like these six designers whom we'll be watching closely once the spotlight flips on in a few days.

Last season the two designers behind this jewelry label showed their presentation in an apartment with African relics and a breezy patio in the back. The vibe was more "garden party for friends" than an overwrought fashion show — and the organically cool vibe also applies to their jewelry. Think cross-hatch lattice cuffs of oversized proportions, necklaces that look like quilted silver breastplates, and coordinating metal evening bags. With Net-a-Porter already carrying the line, expect more covetable statement pieces this season.

With solid financial backing behind him, Simkhai showed last season's collection at to a packed house at Milk Studios. (I saw supermodel Linda Evangelista give an approving nod.) His clothes are sexy — mostly because I can never deny a good crop top — and include flattering cuts for the less daring. A reason to watch him? His eye for color, mixing peach, stripes of navy, cuts of tan, and trimmed with white in clean, un-confusing patterns that are all things chic.

It only keeps getting better for this sister-in-law designer duo. After being selected as CFDA/Vogue Fashion Fund finalists six months ago, their all-American uniform has been spotted on every woman who knows that a good blazer and skinny scuba pants are wardrobe staples. The Spring 2014 collection kicked them up from quality basics to closet covetables as they mixed up their usual neutrals with shots of neon yellow pencil skirts and multicolored ditsy floral print sweatshirts that make me pray for spring. If their Instagram sneak peeks are any clue, then Fall 2014 will be even better.

Fashion need not be so serious all the time, and Shams knows it. For her last collection she played with a pale, almost imperceptible lip print on loose sweatshirts, wrap-around skorts, and even a ballet pink motojacket. A single gown was a sort of West Coast ethereal dip-dye that faded from white to a fuchsia hue skimming the floor. The vibe is casual — but then again, don't we all love to go there sometimes? Shams' separates have lots of potential for travel and playtime, and I look forward to what she has in mind for fall.

A general disclaimer to the fashionably attune would be that Zimmermann is not exactly new on the scene, but they are not a heritage brand, either. That said, they are still under the radar in the U.S., especially their clothes, which I happen to think blow the bathing suits for which they're most known right out of the salty sea. They design an abundance of beautiful prints, shaped into bustier-style dresses, A-line skirts, or short shorts. They're unapologetically feminine without going saccharine. It's rare I walk into a store and want to pay full-price for everything, no waiting or mulling it over, but Zimmermann has that effect. I expect to be captivated again by their fall offerings.

If ever there were a new designer with a fashionable following, it would be Rosie Assoulin. Even blogger Manrepeller has been writing her usual bizarre, profanity-laced praises for this 28-year-old designer. Assoulin's clean designs come in starchy, saturated silks and border on the mundane (the cotton poplin shirt) then sweep straight into demi-couture drama with a strapless top with the longest train turned bow you've ever seen. If I had $2,000 and knew I were going somewhere noteworthy, I'd be racing for one of these confections.

More like this
Rita Ora’s Sheer Dress & Mermaid-Inspired Prosthetics Stun At British Fashion Awards
By Sophie McEvoy
Behold: The Wildest Fashion Moments of 2022
By Dominique Norman
Florence Pugh Wore A Spicy Backless Gown To The British Fashion Awards
By Allie Fasanella
Twitter Can’t Get Enough Of Lewis Capaldi Creating Fashion Looks For ASOS
By El Hunt
Get Even More From Bustle — Sign Up For The Newsletter