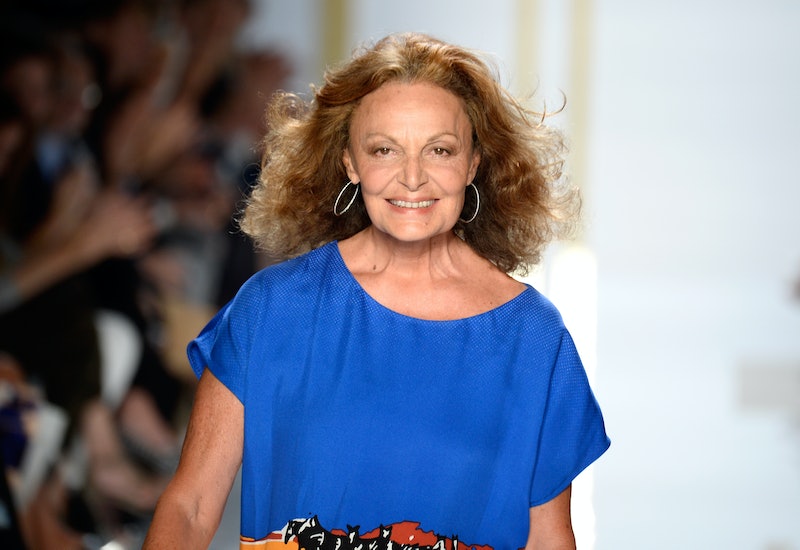 I've worn a wrap dress. You've worn a wrap dress. That's what makes it the wrap dress — everyone has a story with the iconic garment. And this year, Diane von Furstenberg's wrap dress turns 40, but it hasn't aged a day. That's the best part, isn't it? The wrap has been a symbol of women's sexual and social liberation since its creation in 1974. Today's incarnations are fresh, original, and deserving of space in our closets.

If you know fashion — and, hell, even if you don't — you know the wrap dress. According to W magazine, DVF designed the first version four years after moving to the United States from Italy. The wrap dress' design was inspired by her divorce from Prince Egon von Furstenberg. Rather than fight her ex-husband for alimony, she decided to pave her own way by creating a successful business. The wrap dress made it all possible, with its affordability and timely arrival. The dress was a leap forward for the women's liberation movement as it related to the world of designer fashion. From an article published in W last year:

Her wrap could be worn to the office, tied tight and high, loosened after work to show off one’s poitrine at a discotheque, and — should the need arise — be removed with one quick tug shortly thereafter. It was the dress that did everything, for the woman who aspired to do everything.

In 1976, Newsweek released a cover featuring the DVF wrap dress, after which von Furstenberg's career exploded. At the peak of her popularity she sold up to 25,000 dresses each week. Bill Blass once described her as the designer "who put dresses back on women."

Despite her success, von Furstenberg took a break once the market became oversaturated. But nothing could keep her away for long. In 1997, a new generation of pioneering ladies were ready to embrace the wrap dress and the designer who gave birth to it. DVF was back in business.

Today, the wrap dress still matters. We might all fancy ourselves liberated as liberated can be — so liberated that we don't need a dress made out of flowing jersey fabric to show the world just how much we've got things under control. But the wrap dress does what few other items of clothing could ever dream of accomplishing. The wrap dress looks good on everyone.

Seventeen magazine featured the piece in "7 Staples that Look Amazing on Everyone" with the claim that it both creates and supports curves, and Erin Gates sang the wrap's praises on her blog, Elements of Style:

If I was sent to an island I would bring my favorite leopard wrap dress, my computer and some sunscreen. Why on earth would I bring a wrap dress to an island populated by only me? Because the wrap dress has an honest to God power about it-an uncanny ability to turn a “fat day” into a sexy one and somehow manage to instill a sense of power and confidence while also making you really glad to be a woman.

The wrap dress is a sensation because it supports femininity in all of its forms. My first wrap dress came by way of Express, not DVF. I'm sure many of us came to the wrap dress this way, with the thousands of versions hanging on the the racks of retailers across the spectrum. I still remember trying it on in the dressing room on a shopping trip with my mother when I was in middle school. I'd just been crying about my body, ashamed of my large chest and tiny everything else. I felt like a shapeless blob, until I slipped into that dress. It outlined my neckline and flared out at the waist. For once, my abundant curves didn't look awkward or out of place on my slim body.

I wore the dress throughout high school and college and although it is long gone now, lost in the shuffle of closet turnover, I can still feel the slip of the jersey between my fingers and the way that it made me walk with just a bit more confidence.

On behalf of women everywhere, thanks DVF. You've given us so much.

More like this
Iris Law's Skunk Mullet Is Not For The Faint-Hearted
By Tomi Otekunrin
Emily Ratajkowski Just Wore A Totally See-Through Dress
By Dominique Norman
Dua Lipa Just Brought Back 2004’s Dress Over Jeans Trend
By Allie Fasanella
How To Wear Water Waves, According To Meghan Markle’s Hairstylist
By Tomi Otekunrin
Get Even More From Bustle — Sign Up For The Newsletter