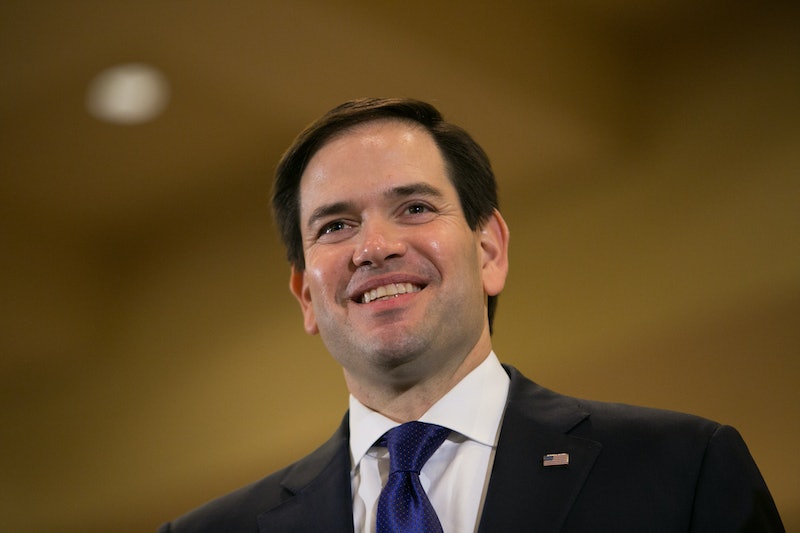 With 11 states holding their contests for the Republican presidential nomination on Super Tuesday, it's a big day for all candidates involved. The Republican race is, by and large, a contest between three candidates at this point: Donald Trump, Sen. Ted Cruz and Sen. Marco Rubio. Will Marco Rubio win on Super Tuesday? The answer depends on what you mean by "win" — and, of course, on results from the primaries and caucuses, which may not be available until Wednesday.

If by "win" we mean "take first place," then it's highly unlikely Rubio will win on March 1. Real Clear Politics averaged results of recent polls from six Super Tuesday states, and those results show Trump to be the likely winner; in all but Cruz's home state of Texas, Trump is ahead in polls by notable margins. Here are the top-three candidate standings for each of those states:

There aren't enough polls from the other five states for as accurate a measure of voters' intents on Tuesday, but we can look at a few February polls from other states for some kind of idea. One poll out of Vermont and one from Tennessee each show Trump to have solid leads in those states. Arkansas' lone February poll shows Cruz barely leading at 27 percent, with Rubio and Trump tied at 23 percent. There are no February polls from Minnesota or Alaska, according to Real Clear Politics.

At this time in the race, with Trump as the clear front-runner and Rubio and Cruz vying for second place, "winning" for Rubio might mean taking that spot. Rubio is the GOP's new golden boy; he's received a slew of endorsements from established party members including Gov. Nikki Haley, Sen. Orrin Hatch, former Sen. Bob Dole and former Gov. Tim Pawlenty. Presumably, the Republican Party is not thrilled with the prospect of having Donald Trump — a real estate mogul/TV personality who thinks all politicians are "dumb," not to mention his outrageously offensive claims about Mexicans and Muslims — be their new face. And they're rallying around Rubio as their best hope of ousting Trump.

But Rubio is not likely to accomplish that feat unless he can take a firm lead on Cruz and stand out as the clear Republican alternative to Trump. Based on available polls from Super Tuesday states, it's conceivable that voters will make that happen. And that could be considered a "win" for Rubio — and the Republican party — in the current climate of the race.

But it's just as conceivable that Rubio and Cruz will come out fairly even, and Trump will maintain his first-place position. That would be a lose for Rubio, Cruz, and the Republican Party.