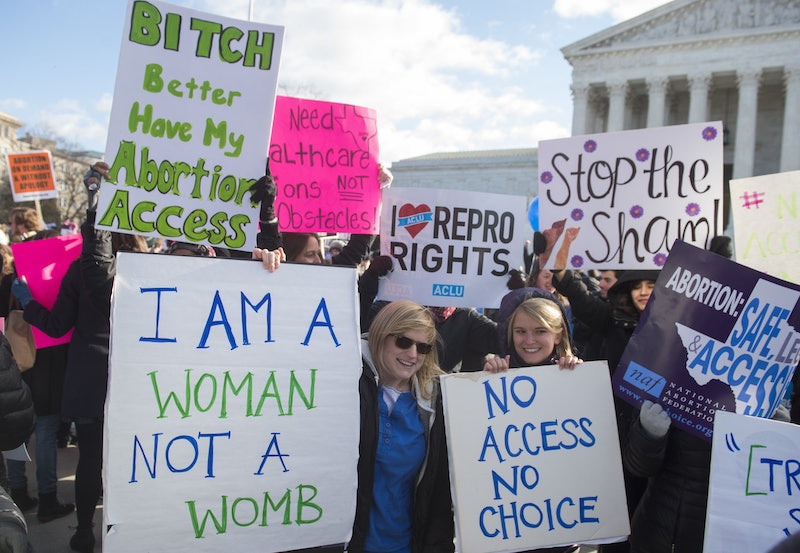 Some new proof that everything is terrible if you have a uterus and a stake in what happens to it comes in the form of new research out of Rutgers University. Researchers have found that one-third, or 35 percent, of American women receive false information about abortions from the state-authored brochures that clinics in 31 states are mandated to give their patients before the procedure.The fabricated content claims that embryos and fetuses are more developed at early weeks of pregnancy than is biologically possible. Any state-sponsored provision of false health and medical information is terrifying.

The fact that a third of the medical information doctors are being forced to share with abortion patients is incorrect provides more evidence that anti-choice politicians will say practically anything about abortion if it means that a woman won't get one. They would prefer that she be frightened and shamed into carrying an unwanted and/or dangerous pregnancy to term, rather than undergo a quick, safe, and legal procedure. Cynthia Daniels, lead author of the study, told Reuters, "This study shows the problems that occur when politicians intervene into the doctor-patient relationship."

The 31 states required to pass out these brochures all follow a state law known as informed consent. Any benefits advocated by anti-choice protesters are completely erased by the fact that the law informs women of dangerous lies presented as truths. Rutger's Informed Consent Project, led by Daniels, examined pamphlets from 23 of the 31 states to gather these findings. The states most guilty of spreading false information in these brochures are Kansas, Michigan, and North Carolina. For example, in North Carolina, the Informed Consent Project found brochures claiming that, at 12-14 weeks, fetuses had partially-formed fingernails and completely-formed noses and lips. This is a total lie.

This study has been released mere days before Whole Woman's Health v Hellerstedt, the first abortion case to be heard by the Supreme Court in almost 10 years. On March 2, doctors and pro-choice activists will be challenging a 2013 Texas law that is resulting in the shut down of clinics across the state and the overwhelming rise of potentially deadly, self-induced abortions. The law bans abortion after 20 weeks, requires that abortion providers have admitting privileges at hospitals, and mandates that clinic hallways and operating rooms are built larger in order to qualify as "ambulatory surgical centers" — all unnecessary for an abortion clinic to run safely and smoothly. Again, the law is just a desperate, life-threatening, and unjust attempt to take away a woman's right to legal medical care, based on the spread of illogical information.

Keep an eye out for other abortion lies spread by anti-choicers:

FALSE. Fetuses do not develop the ability to feel pain until the 24th week of pregnancy, according to the American Congress of Obstetricians and Gynecologists and the Royal College of of Obstetricians and Gynecologists. The University of California, San Francisco is researching the possibility that fetal pain does not develop until 29 or 30 weeks. Compare that to the 2013 admission by anti-choice researchers that their studies have revealed no data about fetal pain. Yet, so many states ban abortion at 20 weeks. The Informed Consent Project found a Wisconsin brochure claiming that the fetus feels pain at 20 weeks.

2. Abortion Is Risky And Deadly

FALSE. So false. Less than one-percent of abortion patients experience a single complication. Over 99.75 percent of abortions go completely smoothly. Statistically, that means birth is more dangerous than abortion.

FALSE. A link between abortion and increased breast cancer risk has never been discovered.