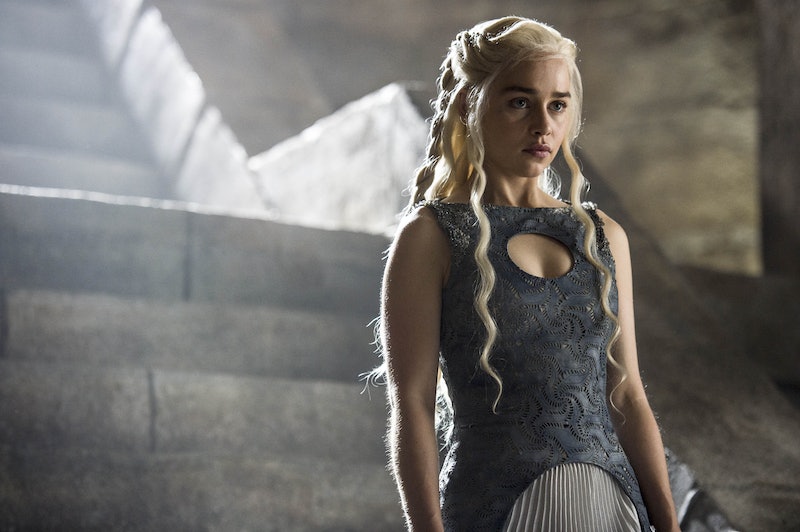 When last we saw our favorite dragon mama on Game Of Thrones, she had been dumped off into the grasslands and was surrounded by a huge group of seemingly very hostile Dothraki. This would have me worried — only if I wasn't completely confident that Daenerys can a, talk herself out of anything and b, her little dragon child wasn't chilling nearby. But, I still have to wonder: what's going to happen to Daenerys in Game of Thrones Season 6? Obviously, none of us civilians will know until Season 6 airs — and the ones that do (aka the showrunners, George R. R. Martin, probably Beyoncé because she's a genius and knows all) are keeping it hush hush — but I've still got some theories.

Recently, in an interview with The Los Angeles Times, the actress who plays the Mother of Dragons, Emilia Clarke, had this to say about the upcoming season: "Shocking moment to shocking moment. Epic moment to epic moment. It’s mental; it’s epic. And definitely Dany’s a part of it." So, OK, we know some crazy shiz is going to go down — which doesn't really come as a surprise because that literally happens every season of Game of Thrones — and that our favorite blondie is deeply involved. But, what can we infer from this? The following are some possibilities for what's going to happen with Daenarys Targaryen in Season 6.

1. She's Going To Khaleesi It Up Round 2

Sure, that Dothraki looked threatening, but Daenerys is also not the worst ally to have on your side. Maybe they'll instantly make her their queen.

2. Drogon Will Save The Day

Fingers crossed Drogon's going to rescue his mama and then they'll have some nice quiet time in the woods together, where they can get reacquainted and she can learn to train him better. What's the point in owning a killing machine if it doesn't listen to you?

3. Jorah And Daario Will Lead A Bold Rescue Mission

Daenerys dropped her ring when the Khalasar surrounded her, probably as a sort of bed crumb trail for her crew. Let's hope Jorah and Daario can work together well enough to find her.

The R + L = J theory is that Rhaeger (Dany's brother) and Lyanna (Ned Stark's sister), had a little baby and that baby was Jon Snow –– who Ned swore to protect. In the books, the last place Ned sees Lyanna is in the "Tower of Joy," which, as The Telegraph points out, just so happens to resemble a location where Game of Thrones Season 6 was shot. This could mean there are two Targaryens — and if there are, they have to meet.

Dany tried the Queen of Peace route, and it went badly for her. Maybe she'll bail on that place and leave it for Tyrion to rule. She can then go on and become Daenerys the Conquerer and not Daenerys the Queen. She's having a bit of an identity crisis, but what 20-something isn't?

Maybe it shall be revealed that Tyrion is not actually a Lannister, but a Targaryen. This makes sense, because Tyrion doesn't resemble his siblings at all, and he's got the weird eye thing going on in the books. That's three dragons for three people (Dany, Jon, and T). I'm very down with a rulership by those three. They would all compliment each other nicely.

Whatever happens, Daenerys is one of the strongest characters on Game of Thrones, which is a show full of strong characters –– so I'm sure she can hack it.