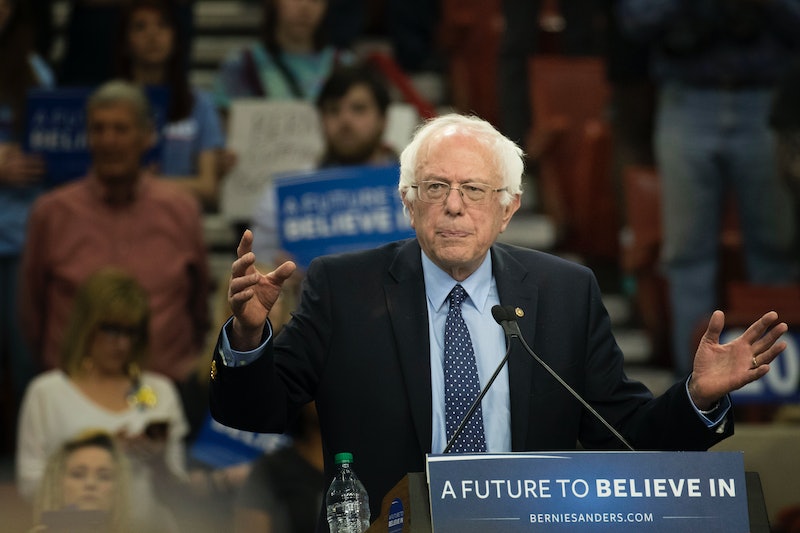 Every victory counts, even if it's not the biggest prize of the night. On Super Tuesday, Bernie Sanders won Oklahoma with 51.6 percent of the vote, meaning he'll be taking 20 delegates with him from the Sooner State. Sanders' win in Oklahoma is his second win of the night after taking his home state of Vermont in Tuesday's Democratic primaries — he currently holds 10 of the 16 delegates to be won there. CNBC has reported that 80 percent of Oklahoma voters believe Sanders is honest, compared to the 53 percent that believe the same about Hillary Clinton.

One reason Oklahoma voters may have been swayed to vote for the Vermont senator — even though Clinton was recently leading Sanders in Oklahoma polling rates — is his continued "war on Wall Street." At a campaign rally in Oklahoma City on Sunday, Sanders' media advisor Tad Devine said, "Oklahoma is a place where there is a tremendous amount of outsider, anti-establishment sentiment in the electorate and the electorate at large." Sanders echoed that sentiment to Sunday's crowd of over 6,000 people, encouraging them to feel the Bern on Super Tuesday and ignite the political revolution that the Democratic candidate has repeatedly been calling for. "On Tuesday, Oklahoma can play a very important role in moving this country forward to a political revolution. Let’s do it," he said.

The Sanders campaign has spent a significant amount of energy in the Sooner State leading up to Tuesday's primaries, specifically to win over the hearts of working class voters, whom he has continuously targeted and won over throughout the duration of his campaign. “I do not have a super PAC,” Sanders told MSNBC in October. “I don’t represent the billionaire class. I don’t represent corporate America. I don’t want their money. We raise money differently.” And he has stood by that claim.

Sanders raised over $42 million in just the month of February, proving that his campaign will not be easily put to rest. He has also consistently spoken up about his representation of working class families, which is one reason Oklahoma supported him on March 1.

The Sanders campaign reportedly spent $690,000 in Oklahoma leading up to Super Tuesday, and his win in the state might just be enough to prove that he can potentially win big in upcoming primary states.