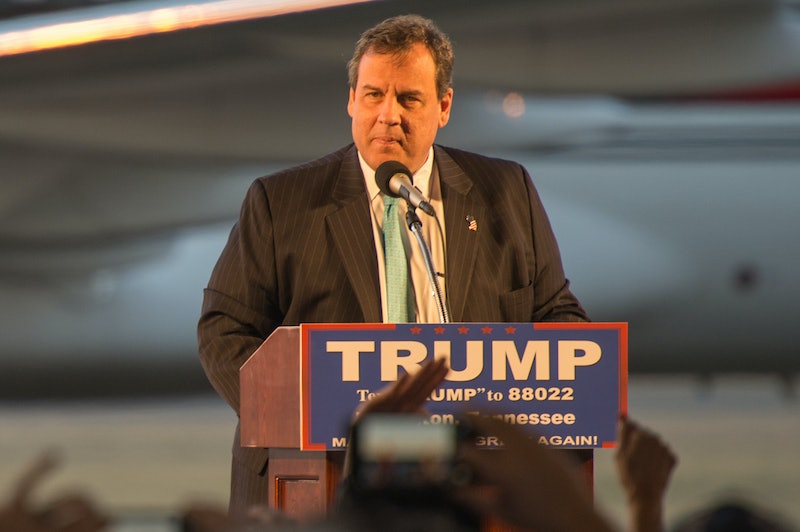 Introducing the Donald at his Super Tuesday victory speech, Chris Christie looked unhappy at Donald Trump's win, especially since he endorsed him for the nomination just last week. Speaking at Trump's Mar-A-Lago estate in West Palm Beach, Florida, the New Jersey governor took the stage to introduce the man he called "the next president of the United States," albeit in a voice and with a facial demeanor that suggested such a statement was issued reluctantly. The sad look in Christie's eyes and the defeated tone of his voice was immediately obvious, and shots of his depressed appearance immediately started going viral over Twitter and, of course, spurring memes.

Many commented that Christie's expression conveyed misery, if not all-out regret for having thrown his support behind Trump last Friday —a move that has earned Christie a new batch of enemies. In the days since Christie formally endorsed Trump, many Republicans have lashed out at him. Hewlett Packard Enterprise CEO Meg Whitman, who had been a major supporter of Christie's 2016 presidential campaign, called it "an astonishing display of political opportunism." The remarkably depressed, distraught look on Christie's face on Super Tuesday night suggested that the New Jersey governor just may have realized the errors of his ways. When Christie appeared, it was immediately evident that he wanted to be pretty much anywhere other than on a stage, telling the country how great of a president Trump will be.

Fast emerging as one of the most popular Christie face memes is the comparison between the New Jersey governor and Arrested Development's Gob Bluth's "I've made a huge mistake" face. Even Will Arnett, the actor who played Gob, got in on the Christie meme:

Still, it was clear that all over Twitter people were pouncing on the Christie face. Perhaps, they couldn't help relishing the thought that the bombastic Christie was actually regretting his Trump endorsement and realizing what it meant for the country. Or, maybe, people gravitated to the despondent look on Christie's face because after a night of multiple big wins for Trump, misery loves company.