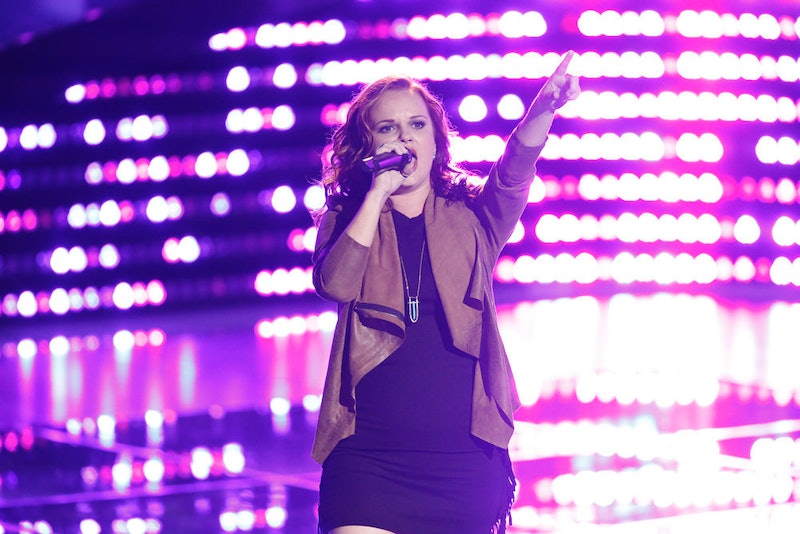 Christina Aguilera kissed a girl — and she liked it. In what was possibly the craziest The Voice audition and coaches' battle ever , Season 10 contestant Kata Hay wooed Aguilera, entertained Adam Levine, and had Pharrell thinking he was in a dream. The 28-year-old brought her country-soul style to Gretchen Wilson's "Redneck Woman" and earned a three chair-turn from the aforementioned coaches. And after being playfully mocked by Levine and kissing Aguilera, Hay made her final decision — she would join Team Christina, and I can't help but think Aguilera's "let's make out" strategy had something to do with it.

Hay's audition was hands-down the most entertaining of the season. To start it off, she tripped as she headed on to the stage, getting the coaches laughing before her music even started playing. The only thing funnier than seeing a person trip is hearing it and not knowing what's going on — so their laughter is certainly forgivable. Things ran much smoother once she started singing, but despite her strong performance, it was doubtful that she would get any chairs to turn. The coaches waited until the last possible second to hit their buttons, but they got in just in time. And once Hay's performance was over, the show really began.

It didn't seem that the coaches were campaigning for Hay's decision as much as they were just enjoying her company. The 28-year-old's charismatic personality really shined through her performance and introduction. The coaches got comfortable with Hay real quickly, which is why their battle got so crazy.

Was it just me or did Levine and Pharrell completely give up trying to earn Hay's decision as soon as she admitted to having a "girl crush" on Aguilera? It's questionable that Pharrell even campaigned at all. He completely lost it the minute Hay and Aguilera jokingly kissed and began acting like a 12-year-old boy who just saw a girl's boobs for the first time. Seriously, keep it together man! You've never seen two girls kiss before?!

Alas, Hay ultimately chose to join Team Christina and it was the best choice for her. As a strong woman with a powerful voice, there really shouldn't have been a doubt in her mind that she needed Aguilera as a mentor. Keep an eye on Hay, because something tells me that, with Aguilera on her side, she's going to be around for a while.