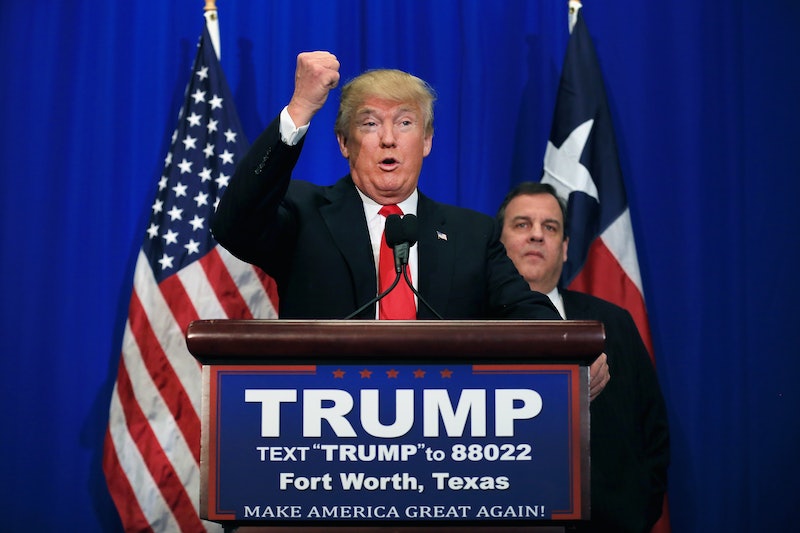 At the end of a rather victorious night on Super Tuesday, Republican frontrunner and outspoken businessman Donald Trump took the stage at his campaign's headquarters in Palm Beach, Florida. On stage with him was an expressive — and worrisome — Chris Christie, the governor of New Jersey who dropped out of the race and endorsed Trump. Christie stood behind Trump as the latter went on and on about his opponents, his priorities — which apparently include defunding Planned Parenthood, while also being "really good" for women — and whatever else he felt like talking about.

As Trump spoke, Christie looked nothing less than concerned. He didn't appear to nod or cheer in the way you'd expect from someone sharing the stage with a candidate they've endorsed for president. He has taken to the stage with Trump before, actively supporting him in the days leading up to Super Tuesday. Those encounters garnered some attention of their own, but perhaps nothing compares to the reaction Christie received on Tuesday night. The jokes, memes, and GIFs started rolling in online before Christie even had a chance to leave the stage. If Christie hadn't been rethinking his endorsement before, these jokes could make him want to start.

It's hard to imagine anyone stealing the stage from Trump, but that's exactly what the New Jersey governor did as Trump gave a long victory speech in Florida. Judging by the looks of things, Christie either has a bad case of resting worried face or he's seriously reconsidering his endorsement of Trump. Either way, he gave the country something to joke about other than Marco Rubio's fading campaign.