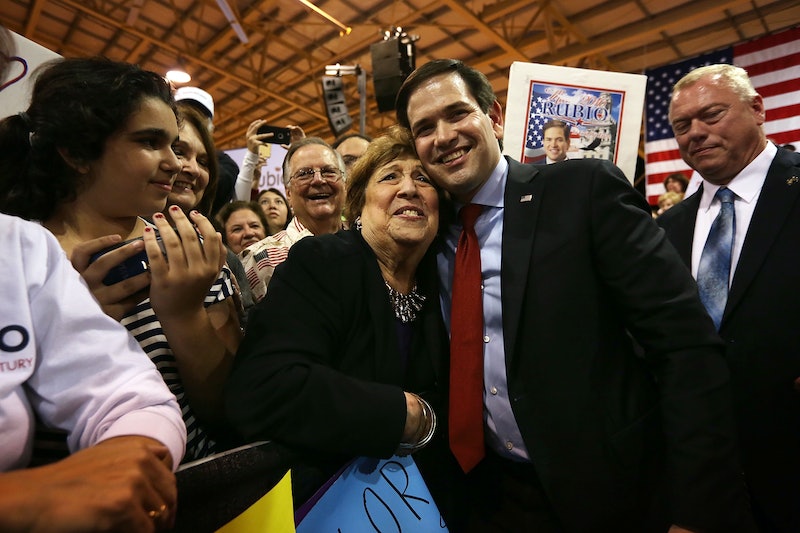 He didn't have quite as big a night as frontrunner Donald Trump and Texas Sen. Ted Cruz, but Florida Sen. Marco Rubio still managed to earn delegates during the much-anticipated Super Tuesday primaries and caucuses throughout much of the country. In fact, Rubio picked up delegates in almost every state that held a Republican contest on Tuesday. What remains to be seen, though, is whether or not those delegates will be enough to keep Rubio's campaign viable beyond the upcoming primary in his home state of Florida.

As of early Wednesday morning, Rubio won 71 delegates from the Super Tuesday results, giving him a grand total of 87 delegates of the 1,237 needed to win the nomination. The delegate tally painted a clear picture of where Rubio stood in relation to Trump and Cruz, who have 285 and 161 total delegates, respectively. From that picture, Rubio's path forward appeared to be an uphill battle.

The bulk of Rubio's delegates came from his win in Minnesota's Republican caucus and his strong second-place finish in Virginia's Republican primary. Minnesota had 38 total Republican delegates to allocate, of which Rubio claimed 12. In Virginia, 49 red delegates were on the line, and Rubio secured 16, just one fewer than the state's winner, Trump.

If you think Trump's and Cruz's numbers seem to dwarf Rubio's results, you're not wrong. Rubio's win in Minnesota, although a big win for the campaign, seemed to be overshadowed by the losses he suffered to Trump, Cruz, and even Ohio Gov. John Kasich throughout the night on Tuesday.

In order to win the party's nomination, a Republican candidate needs 1,237 delegates. With the leading candidate commanding fewer than 300 delegates' votes as of early Wednesday morning, the GOP's primary race is still very much undecided. The main test for Rubio's campaign on Super Tuesday was to prove that the candidate could win a state's popular vote outright, which he did with the Minnesota caucus. Unfortunately for Rubio, Minnesota had a relatively small number of delegates to award.