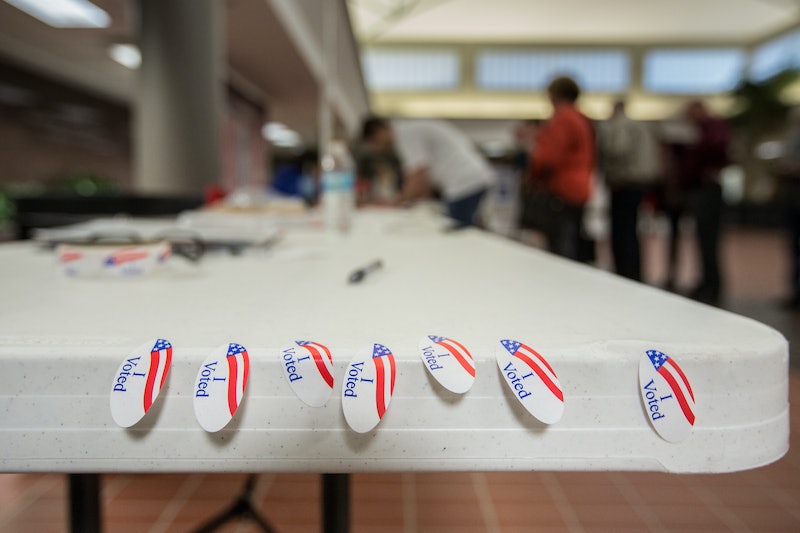 The 2016 presidential primaries are well underway, with Iowa, New Hampshire, Nevada, and South Carolina behind us, and Super Tuesday is over. If you're registered to vote in this year's primaries and are still considering who to vote for, or even whether or not you should hit the polls at all, please keep in mind that every single vote counts — and here's why. Your single vote could literally be the difference between former Secretary of State Hillary Clinton and Vermont Sen. Bernie Sanders winning a precinct, town, county, or state. And that's exactly what happened on Super Tuesday.

In the small town of Methuen, Massachusetts, Bernie Sanders beat Hillary Clinton by just one vote (3,409-3,408). At the end of the day, Clinton still won Massachusetts with a 50.3 percent voting rate. She took 45 delegates with her Massachusetts win, leaving her with a total of 1,001 delegates to Sanders' 371. Overall, Massachusetts saw a record number of voters this year. According to Massachusetts Secretary of State William Galvin, the state was expecting nothing less. "I speculated that we would beat the 1.8 million voters in 2008, but now I'm hopeful we could get to 2 million, which is pretty impressive considering we're a state with about 6.5 to 6.6 million people and a little over four million eligible voters. So that's a pretty high percentage of participation if we get to that level," he said Tuesday afternoon.

Take a look at this tweet of the Massachusetts Democratic voting precinct rates for a clear visual of why every single vote counts:

But even with Massachusetts' surge of voters, this election cycle has seen a generally low voter turnout rate among Democratic voters across the country. For instance, during South Carolina's 2016 Democratic primary, the voter turnout rate was 30 percent lower than Clinton's last run in 2008. That's a significant decrease during such an important election, especially since South Carolina Republican primaries saw a simultaneous 20 percent voter increase.

So while you should definitely consider the impact of your vote during the primaries — that your one vote could determine whether Sanders will take out Clinton in your small town — remember that single vote moving forward. It could be the difference between Hillary Clinton and Donald Trump.