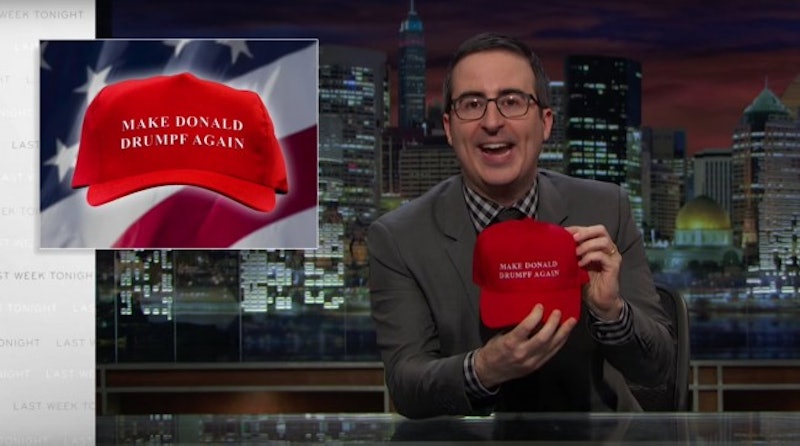 On Sunday, Last Week Tonight's John Oliver showed no mercy and annihilated Donald Trump's viability as a presidential candidate. In his 22-minute spiel, he dismantled Trump's promises, suggested that he was a "serial liar," and, most delightfully, took him back to his ancestral roots. As Oliver pointed out, "Trump" sounds elite ... but "Drumpf"? Not so much. Most of us might be surprised to learn that Trump's ancestors came to the States with the surname "Drumpf" and changed it to "Trump."

The GOP frontrunner doesn't tend to shy away from anything. He'll dismiss something questionable completely and call it "stupid" before he acknowledges a complaint or provides a viable answer. And somehow he gets away with doing so. Oddly, though, that bold, pompous demeanor hasn't come out in response to Oliver's new parody campaign, "Make Donald Drumpf Again!" The NYC billionaire hasn't said a word in response to the segment. But don't stop holding your breath. Something must be brewing.

This wouldn't be the first tiff Trump has had with Oliver. On Oct 15, 2015, Trump tweeted that Oliver's "very boring and low rated" show requested that he appear on a segment. Oliver tweeted back the next day and burst his bubble.

The Donald's learned not to harass the one show that's refrained from focusing on him every chance it gets. But has he said anything about his ancestral name, Drumpf? I have a hunch that he's not particularly proud of it. Trump first publicly (albeit briefly) mentioned the name in his 2004 book Trump: Think Like a Billionaire while bragging about how much research individuals not related to him have done on his family:

A lot has been written about my family. A writer named Gwenda Blair spent 12 years on her thorough history The Trumps: Three Generations That Built an Empire. She even traced our lineage back to 1608, when a German lawyer named Hanns Drumpf settled in the town of Kallstadt ... According to Blair, one of my ancestors, a winegrower, changed the family name to Trump at the end of the 1600s — a good move, I think, since Drumpf Tower doesn't sound nearly as catchy.

Besides that acknowledgement, the candidate has been inconsistent in describing his ancestry, as well as his family's immigration to the states. On June 16, Trump began his presidential campaign by denouncing illegal immigration:

Though he could hardly be expected to promote illegal immigration, the way Trump has gone about insulting groups of immigrants — Muslim and Mexican, legal and undocumented — is over the top and unnecessarily harsh. In fact, Trump's own father suffered from similar xenophobic backlashes after World War I. The rise of Nazism gave Germany a horrendous reputation, and Fred Trump began denying even the slightest familiarity with the German language. Fearing the association between Germans and Nazism (sound similar to Syrian refugees and Assad's dictatorship?), Fred began claiming Swedish descent.

Trump's divisive language and exclusionary policy proposals are the only things that make his ancestry relevant today. That being said, we're all waiting for a fiery response to Oliver from the Drumpf campaign.