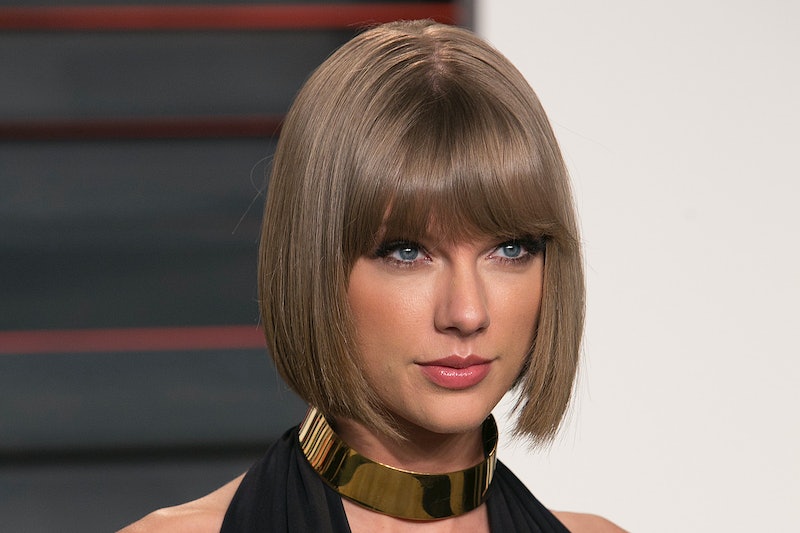 If there's one thing we know about Taylor Swift, it's that she loves her cats. After all, Meredith Grey and Olivia Benson, have pretty much become stars in their own right at this point, and for good reason: they're adorable! They're fluffy and cute and who doesn't love cats? That's why I don't think it's the most ridiculous thing I've ever typed when I tell you that it's not out of the question that Swift would maybe write a song or two about her cats. After all, they're her babies and she loves them, so why not? And why can't one of those songs be "New Romantics"? Yes, I'm saying that "New Romantics" may very well be about Meredith and Olivia — deal with it.

Think about it — the lyrics of "New Romantics" could be about an actual romantic relationship with a former boyfriend, her BFF Selena Gomez, or they could actually be about her pets. All it takes is a critical ear and a little bit of imagination and I'm pretty sure you'll be seeing things my way in no time. Is it likely this theory is true? Probably not, but I think it's fun and I'm going with it.

Here's what I mean:

We're all boredWe're all so tired of everything

Cats are always bored. No matter what kind of fancy toys you have, what delicious food you try and tempt them with, they're just not feeling it. It's pretty hard to get them excited really about anything. which is pretty rude, but it's part of their charms.

Scarlet letters, you say? Have you ever felt the scorn of a cat's claws? If so, you'll know exactly what I'm talking about here. Those "scarlet letters" come in the form of massive, bleeding scratches that take weeks to heal and hurt like hell. Definitely about cats.

We're so youngBut we're on the road to ruin

You haven't experienced the joys of cat ownership until your living room curtains are ripped off the wall by a cat climbing them in terror because you turned on the vacuum cleaner. They will scratch your furniture to bits, destroy your favorite clothes with their hair, and basically bring hellfire to everything in your life. But you love them anyway, of course.

We play dumbBut we know exactly what we're doing

Don't let those adorable furry faces fool you — they know exactly what they're up to. They know they're adorable and that you love them and can't stay mad at them for very long, even if they do destroy your entire house.

We are too busy dancingSo get knocked off our feet

Do cats EVER fall and not land on their feet? They do have nine lives, after all, so it's pretty hard to knock them down. Even if they jump from the top of your kitchen cabinets to the top of your refrigerator and then all the way to your living room couch, they're not going to let a silly thing like balance slow them down.

We need loveBut all we want is danger

When cats want your attention and physical affection, you will never be left alone. They'll follow you from room to room and tap your hands with their paws... and then claw you to death if you deign to move too fast or shake your foot under the blanket you're covered with on the couch. Make up your mind, cats!

It can be tough to be a cat owner, but when it comes to snuggling up to the little buggers at night as you drift off to sleep, you're pretty glad you put up with all the bad stuff to get to this.

See? "New Romantics" could totally be about cats. I told you!

More like this
Sadie Sink Would Escape Vecna From 'Stranger Things' With This Taylor Swift Song
By Grace Wehniainen
Taylor Swift's “Carolina” Theme For 'Where The Crawdads Sing' Soundtrack Is Here
By Jake Viswanath
Here’s How Lizzo Is Supporting Abortion Rights After The Roe v. Wade Reversal
By Brad Witter
Why Sarah Jessica Parker Wanted Fans To Stop Calling Her Hair Choice “Brave”
By Brad Witter
Get Even More From Bustle — Sign Up For The Newsletter