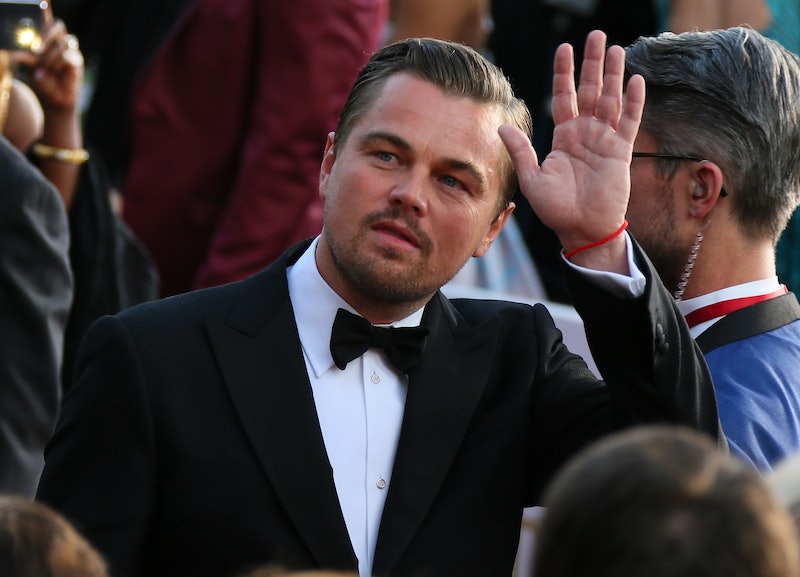 It looks like memes weren't the only thing trending after Leonardo DiCaprio earned his first Oscar. An $800 Titanic hoodie from Vetements has sold out, apparently thanks to the actor's win, and it's not the apparel that the actor's face is taking over. The "Leonardo DiCaprio Effect," as Refinery 29 calls it, is alive and well. The jokes about DiCaprio's Oscar-less existence might be over, but at least there's a stylish new trend on the rise.

If I asked you if you wanted to own an oversized Titanic sweatshirt before Sunday night, the answer would probably be no, right? But no that DiCaprio is an Oscar winner, the answer just might change. Vetements, known for unique sartorial creations, created the sweatshirt with a screen print of DiCaprio and Winslet floating above an image of the sinking ship with the sleeves reading "Coming Soon," and people are loving it.

The Vetements sweatshirt has been around since fall, but according to Refinery29, it didn't start selling out in stores until after the actor took home the little gold statue. In fact, they sold out almost instantly in all except for one online store. That's right! The Oscars win made an $800 sweatshirt with Leo's face on it sell out overnight.

The only place that you can get the shirt as of right now is ssense.com, where it is currently selling it for $665 instead of the $800. If you're looking to spend a little less than that, there are plenty of ways to show your DiCaprio pride that are just as fabulous and are about a twentieth of the price.

Why wear just one of his many movie characters when you can wear them all?

If all of his on-screen characters are a little too boring for you, there's always this rainbow-faced hoody.

This print has been around for a while, but there's no better time to rock it with pride.

Your heart can go on knowing that this is so affordable.

His love will keep your toes warm.

Throw it way back with this black and white tank top to show that you were a true fan from the start.

Of course, you need an Oscars sweatshirt to complete the entire collection.