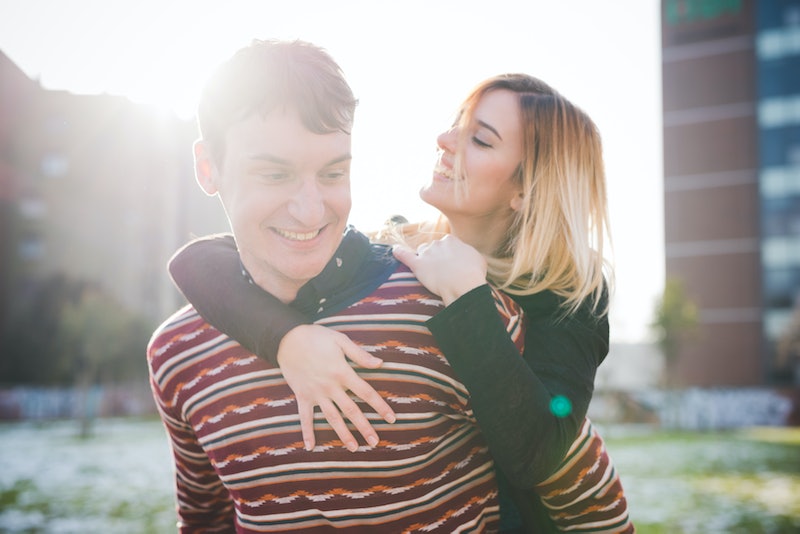 Some people will say never to bring up politics on a date, but others think politics are completely necessary to address with someone new right away. Since it's an election year, a few significantly large surveys have already been conducted on the relationship between politics and love. So how are politics affecting dating and relationships for millennials? Well, for one, politics are affecting our sex lives.

But a new survey by Teen polling app Wishbone polled 10,000 teens and millennials across the U.S. about our relationships with each other and politics. The survey found that if the running were between Donald Trump and Hillary Clinton, millennials were 72 percent for Clinton and 28 percent for Trump.

But let's get back to this relationship business. If you and a partner or someone you're on a first date with disagree over who you support in the 2016 presidential election, could your relationship actually be doomed? Here's the scoop.

1. 47 Percent Of Milllenials Would Not Date Someone With Different Political Beliefs

It would seem that indifference concerning politics is a reason for couples to call things off. According to the surveys results, one millennial, Julie Geissert, 29, broke off a month-long relationship after her boyfriend used the term “liberal pieces of sh*t” while flipping through TV channels and stumbling on presidential election coverage. Yikes!

2. On The Other Hand, 53 Percent Of Millennials Say They Would

However, the majority of those polled said they would still date somebody with different political beliefs, which is the way it should be, if I do say so myself. Want to make it work? Don't talk about politics together! Go in and vote together, then leave your beliefs in the ballot box. Don't let a politician have a say in who you date as well!

3. 1 in 3 Millennials Feel It's Best To Discuss Politics And Religion On First Dates To Get It Out Of The Way

Unlike the Singles In America survey, only one in three millennials deem it OK to discuss politics and religion on the first date, while 80 percent of those polled by Match deemed it necessary.

Like dating experts have said for centuries, it’s best to steer clear from taboo topics that can cause a conversation to get heated, especially on the first date. It would appear that the majority of millennials agree with this sentiment, saying the first date is far too early to discuss such taboo topics.

5. 36 Percent Say Their Parents/Family Would Care If They Married Someone From A Different Political Party

Personally, I think if you want to make a good impression on your in-laws, you should keep discussions around politics light. I tend to do the same thing with hockey teams, which, if you’re Canadian, can get just as heated and is considered by some even more important than politics.