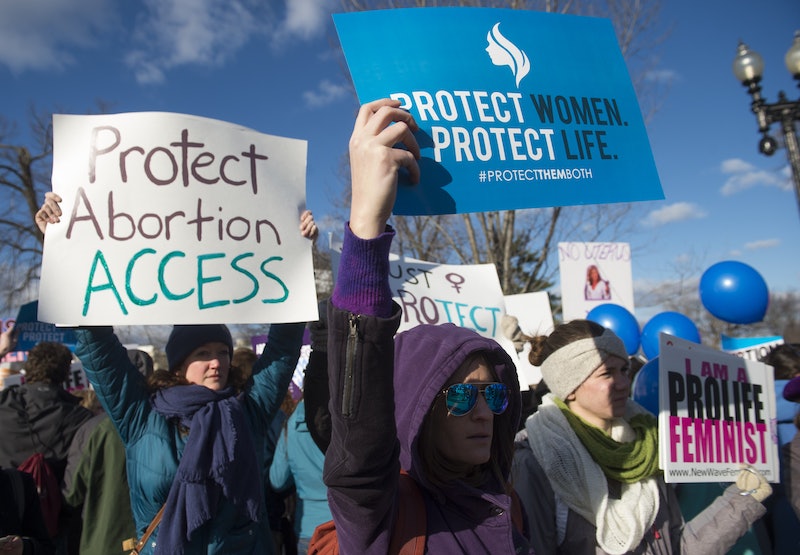 On Wednesday, the Supreme Court finally began hearing a major abortion case, Whole Woman’s Health v. Hellerstedt, which challenges two Texas policies which restrict women's access to the procedure. The Texas Omnibus Abortion Bill (HB2), passed in 2013, requires all clinics performing abortions, including those carried out in pill form, to meet the standards of an "ambulatory surgical center." As NPR points out, this basically means that abortion clinics must double as mini hospitals — a trend that was popularized in the 1970s. The case also challenges a provision which forces doctors to have admitting privileges at nearby hospitals before performing an abortion.

So far, fewer than half of Texas' abortion clinics have been able to keep pace with the standards. Though the Justices will vote on a decision on Friday, they aren't obligated to release that decision until the end of June 2016. Thus, it's incredibly unlikely that an outcome will be announced this week, let alone this month. In order to form an opinion, the court will read the 80 briefs that were submitted and listen to lawyers speak for each side.

Whole Woman’s Health v. Hellerstedt is the first abortion case brought to the Supreme Court since 2007's Gonzales vs. Carhart, which reinforced the federal Partial-Birth Abortion Ban Act. Before then, in 1992, the Supreme Court heard Planned Parenthood vs. Casey, a challenge to Roe vs. Wade. The court ruled then that states could regulate abortion as long as said regulations didn't present any "undue burden" on a woman seeking an abortion. Thus, the question at hand today is whether HB2 enacts unnecessary obstacles to accessing the procedure.

Challengers initially brought their complaints to the federal appeals court in June, but had no luck in overturning the law. Now that they've successfully brought it to the attention of the Supreme Court, pro-choice advocates must convince the Justices that the state's socially conservative legislators are covering up an attempt to make abortion less accessible for women by claiming that the policy was enacted to ensure their safety. The Washington Post reported that since the law was passed, 21 out of 40 abortion clinics in Texas have shut down, making it exceedingly difficult to seek out a clinic on time. If the law remains enacted, abortion providers project that the number of clinics in the state will fall to just 10.

According to USA Today, the Supreme Court seemed torn on a decision as they heard both sides on Wednesday. At least four of the court's progressive judges are expected to vote against Texas' provisions, which would bring the decision to a tie if the other four voted to uphold the law. Without the presence of Roe v. Wade dissenter Antonin Scalia, who recently passed away, it's extremely unlikely that the law will become any stricter than it already is.