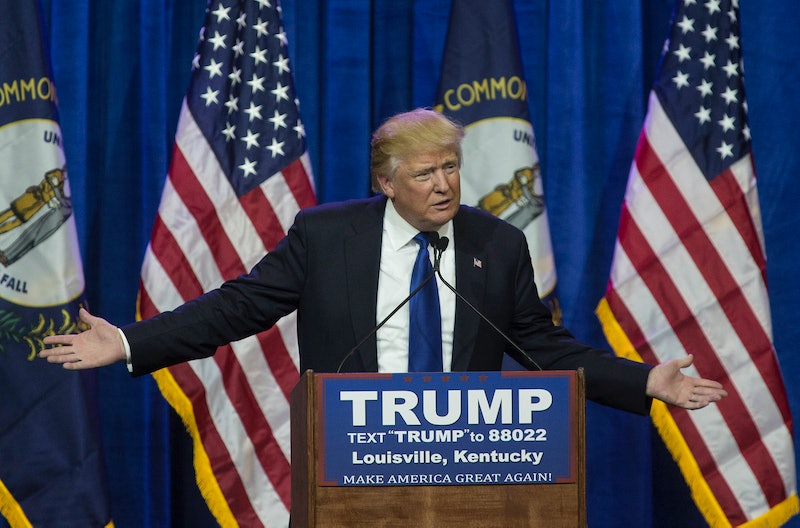 On the latest episode of Last Week Tonight, John Oliver issued a challenge to the nation to "Make Donald Drumpf Again," referring to the Trump family's former, significantly less regal-sounding surname. Trump (or Drumpf, whichever you prefer) hasn't yet issued a response on this topic. But he definitely should and probably will, especially considering the savagery of Oliver's attack.

Knowing Trump, any rebuttal to Oliver won't be in some kind of official statement. He is the master at slipping insults and retorts into interviews and speeches. For example, there's his infamous "blood coming out of her wherever" remark about Megyn Kelly. And don't forget that the whole semi-feud between Trump and Oliver got started when Trump backhandedly insulted Oliver during an interview, describing the critically-acclaimed show as "boring" and claiming that he had turned down an invitation to appear on it (Oliver has denied this). It makes sense that Trump might respond in similar way now that Oliver has laid down the gauntlet.

The funniest scenario would probably be Trump threatening to sue Oliver. Much of the LWT segment focused on Trump's predisposition toward somewhat hasty legal action which he only haphazardly follows up on, so if Trump warns of a possible lawsuit, it would be simply amazing. The problem for Trump is that there's actual science to support Oliver's argument that the name "Trump" gives him undue credibility. The Boston Globe interviewed some name experts back in September, and they determined that Trump's career might have taken a much different path if the Drumpf name had been passed down to him.

"[Trump is an] unusual name ... a single-word name, which sounds very grounded, very firm," said Laurel Sutton of the Catchword naming agency. "It’s not a multisyllabic Romance-type name, [so it's more] masculine-sounding.” Naming and branding expert Nancy Friedman added to the newspaper, "[Drumpf sounds] almost comical in English. That ‘pf’ combination is tough for English speakers and ‘dr’ doesn’t have the same effect on the ear as ‘tr.’ It’s not as sharp, it sounds like ‘drug’ and ‘drop.’"

That's a powerful claim for Trump to refute, but his success in business and politics does seem to have a lot to do with his name. If that gets tainted, it could mean a potentially huge change in his standing in the race. Trump might have a somewhat legitimate grievance with Oliver's expose of the psychological power behind his name, but Oliver told the truth. Unfortunately, the truth has never really stopped Trump from saying he wanted anyway.

The Drumpf joke is hilarious in general, and the longer it keeps going, the more ridiculous and amusing it's bound to become. If you're really committed to #MakeDonaldDrumpfAgain, you can visit DonaldJDrumpf.com and download the Donald Drumpf Google Chrome web extension, so that every instance you find of "Donald Trump" on the Internet will automatically become "Donald Drumpf."