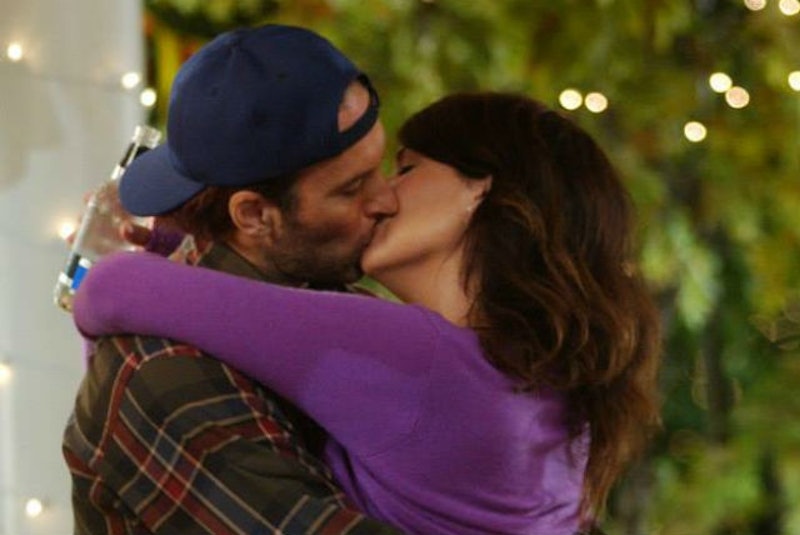 In a world where everything is Luke and Lorelai and nothing hurts, I like to imagine that the two had just one, tiny, little, perfect, baseball cap wearing baby together. He'd go and spend weekends with his big sister Rory who would read him all the classics. He'd go to Grandma Emily's house for dinner, but he'd make sure his mom actually arrived on time. His dad would teach him how to brew a proper pot of coffee for his mom by age 7. And cousin Jess would show him how to build a Soapbox car for the derby with optimum speed. Just go with me on this. Listen, I have absolutely no clue if Luke and Lorelai will have a kid in the Gilmore Girls revival, but a girl can dream. Can't she?

I'm not going to argue whether or not Luke and Lorelai are still together, because it's an absurdly preposterous thing to question. Well, that, and the fact that, according to TV Line, Lauren Graham said at the ATX Television Festival in 2015 that, "I think they’re together, 100 percent." So, I'm going to take her word for it. Mostly because she is Lorelai in a sense and because this scenario fits in well with my personal Luke and Lorelai baby agenda. At least I'm honest in my Gilmore Girls bias, guys.

Here is what a Luke and Lorelai child would probably be like, in an ideal world:

1. First And Foremost, I Think It'd Be A Boy

It'd be fun to see Luke and Lorelai with a son considering, no matter how much we try to deny it, he already has a daughter, and Lorelai has the best one on planet Earth. It's just better to not compete with someone with that sort of a title. Plus, it'd give me Jess and Luke feels.

Like, he'd ask Luke if he could help him make Lorelai birthday pancakes, but wouldn't wake her up to eat them until noon.

3. He'd Be Enrolled In Classes At Miss Patty's Dance Studio

Because he's lively, active, and attention-getting.

4. But He'd Also Be Outdoorsy And A Member Of The Boy Scouts

As TV Line relayed, Scott Patterson did say at the ATX Television Festival that he thinks, "Luke either stayed in town… or he closed [his diner] down and moved to a lake 40 miles outside of town. He reopened Luke’s Diner [there] and it’s a bait and tackle shop. He sells camping gear, as well." Maybe he did do that, just with Lorelai and Luke Jr., who they affectionately call LJ, in tow.

He gets it from his mama.

Because Luke sort of prophesied that he would be, and also because Rory was an angel child. You don't get two of those.

You know, given who his parents are.

Because Luke and Lorelai already raised one genius, and they weren't even trying.

9. Those Smarts Would Be Partly Due To Rory, Who Would Instill Within Him An Unparalleled Work Ethic

And he'd go on to be a Yale legacy, obvi.

10. He'd Be Almost Too Charismatic

The special type of charisma that lets people get away with murder. You know, just like Cousin Jess (much to Luke's chagrin).

11. He'd Have An Affinity For Hats Of All Kinds

I mean, it just makes sense.

All right, now I'm emotionally invested. I need little LJ in my life. Make it happen, Gilmore Girls powers that be. Make. It. Happen.

More like this
“The Door Is Always Open” For Another 'Breaking Bad' Spin-Off, Says AMC Boss
By El Hunt
Neil Patrick Harris Will Play 'Doctor Who's “Greatest Enemy” Yet
By El Hunt
Vanessa Hudgens Proves She's Always A Wildcat At This 'High School Musical' Location
By Alyssa Lapid
'Criminal Record' Is The 'Doctor Who' Reunion We’ve All Been Waiting For
By El Hunt
Get Even More From Bustle — Sign Up For The Newsletter