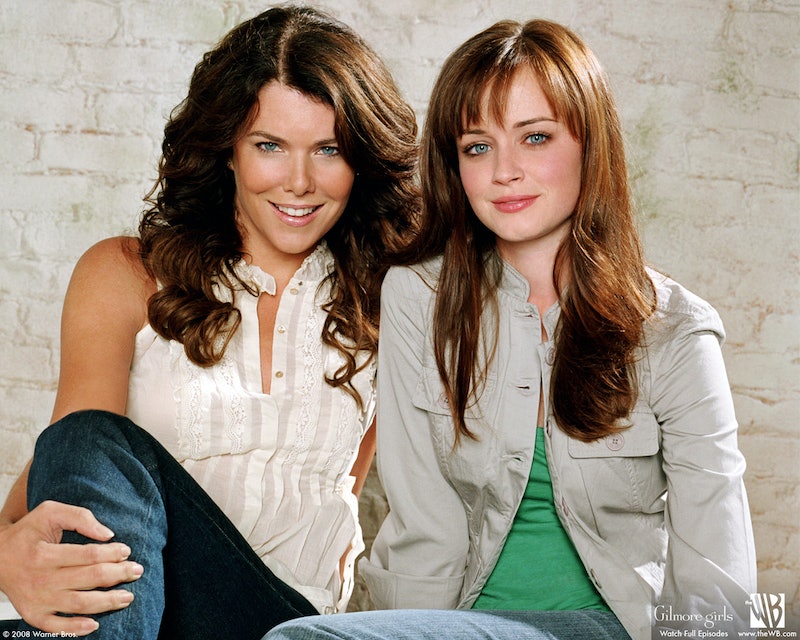 Amy Sherman-Palladino has created two well-known shows in her career, Bunheads and Gilmore Girls. Neither got the ending it deserved. While Bunheads was cancelled too soon after only one season, Gilmore Girls was on for one season too long — sort of.

Sherman-Palladino served as the showrunner of Gilmore Girls for the first six of its seven seasons, and it was a major mistake for The CW to let her, and her co-writer husband Daniel Palladino, walk away before it ended. When the couple left the show in 2006, the last year before The WB became The CW, they told TV Guide that it was because of contract disputes with the network. Somehow, the show still went on for a final season, but without its core creative team. Sherman-Palladino has said in multiple interviews that the way Gilmore Girls ended, without her input, was not what she had in mind for Lorelai and Rory. She also won't say what her ending would've been, in case they ever make a Gilmore Girls movie or reunion of some kind.

Well, I have some thoughts on that, and now that Sherman-Palladino has some free time, I think she should forget about Paradise, Calif. and return to Stars Hollow, Conn., and I have some theories/suggestions about what she should when she gets there.

Now before anyone accuses me of being anti-feminist, let me say that I know Rory and Lorelai are strong women, and their relationship with each other is what really matters. That's the whole point of the show, and I believe they are two of TV's best written, most complex female characters. That being said, half the fun of Gilmore Girls was seeing who they would each end up with, and often, when I discover a fellow fan, one of the first things we discuss is which guy we prefer each of the girls with. So yeah, a big part of this is gonna be the guys. Before we get into hypotheticals, though, let's talk about what actually happened.

Quick catch-up: Rory was dating rich kid/bad boy Logan, who proposed to her horribly at the graduation party her grandparents' threw for her. Lorelai was single, having married and divorced Rory's father Christopher (one of season seven's worst plot lines), but emotionally serenaded Luke at a karaoke night.

During the finale, Logan says it's all or nothing, marriage and she goes with him to San Francisco, or they break up. After her graduation, Rory says no. She then receives her dream job as a poltiical reporter, following then-Primary candidate Barack Obama on the campaign trail. She accepts and Stars Hollow throws her a huge Bon Voyage party.When Lorelai sees all the trouble Luke went through to make sure Rory's surprise party happened even with a giant storm, she kisses him.

While there were many problems with the last season, the final shot of the series is a beautiful one. Lorelai and Rory have one last breakfast together at Luke's Diner before she leaves, echoing a scene from the first season that has been used in the show's opening credits.

How It Was (Probably) Supposed to End for Rory

Yeah, you see that guy up there? That's Jess Mariano, played by Milo Ventimiglia, Rory's second boyfriend on the show, and the guy who I'm pretty sure was supposed to be endgame. As much as Sherman-Palladino may have wanted to emphasize the Lorelai/Rory relationship and their independence, I don't think she would've had either of them end up without a romantic partner. There was a lot of emphasis throughout the series on their love lives, and it's hard to imagine that she would've ended it with one of their characters lacking one.

Why Jess? Well first, let me admit that I'm completely biased because I love Jess Mariano with all of my heart. But there is still hard evidence that in the end, Rory should've ended up with the sensitive, well-read rebel. Jess was on Gilmore Girls for Seasons 2 and 3, until his character moved to California to get to know his father. He was actually written off because Jess was supposed to get his own spin-off series, for which the Gilmore Girls episode "Here Comes the Son" served as a backdoor pilot. Unfortunately, The WB decided not to pick up the series when they realized how expensive it would be to shoot on location in Venice Beach.

Instead, Jess would pop up from time to time, and every time he did it just showed again that they were meant to be together. The first time he reappeared was in season four, when he confessed to Rory that he loved her. A few episodes later, he goes to Rory's dorm room and begs her to run away with him to New York. If you can handle seeing him have his heartbroken, watch the scene below.

Yes, Rory denied him, but the whole thing screwed her up so much she started having an affair with her married ex-boyfriend Dean in the next episode. After that, Jess layed low until season six. That was the season when Rory dropped out of Yale after boyfriend Logan's father shattered her dreams, and as a result stopped speaking to Lorelai and moved in with her grandparents. It was disastrous, and guess who fixed it? Yup, Jess. When he came to show her that he'd gotten his life together and became a writer (swoon), he made her realize that she wasn't acting like herself. By the next episode, Rory had gotten herself a journalism job and made up with her mom.

It's Jess's last appearance that is the most heartbreaking. After finding out that Logan slept with many women while they were "on a break," Rory goes to see Jess at his publishing house in Philadelphia. Their chemistry instantly returned and they kissed, and my heart almost exploded, but Rory instead tells Jess that she's in love with Logan (bullshit) and leaves. Some of his last words to her? "It's what it is, you, me." True love is what it is.

After that sixth season, Ventimiglia told TV Guide that he only kept returning to the show because the Palladinos asked him to, and wouldn't return if he were asked by Dave Rosenthal, their replacement. Maybe Sherman-Palladino would've asked him to return one more time if she stayed, and he would've been the guy Rory ended up with. Rory and Logan's relationship wasn't in the best position when the sixth season and ended, and there were plenty of ways they could have reunited.

Even the basics of their relationship proved they were going to end up together. Though Rory kissed Jess while she was dating both Dean and Logan, she never cheated on Jess. And I believe Logan's purpose as a character was to make Rory a little more rebellious and let her really become an adult, before going back to the person she was always supposed to be with. For all of his emotional issues, Jess was more of a grown-up then Rory, she needed to catch up before they could be together.

Finally, there's this simple theory: Jess is Luke and Logan is Christopher. There are parallels between the men, and just like Lorelai was destined to be with Luke, so was Rory for Jess. Besides the easy fact that Jess was Luke's nephew, they both put on fronts to hide their sensitivity, both were able to keep up with Rory and Lorelai in a way most other men couldn't, and both had ties to Stars Hollow.

There's an episode in the sixth season when Christopher visits Rory and meets Logan, and the two bond over all of the boarding schools they were kicked out of. They're blonde, rebellious rich kids who resent the expectations put on them. For Lorelai, Christopher was her past. He was Rory's father and she'd always love him, but he was tied to her unhappy childhood and stuffy Hartford life. Luke was all Stars Hollow, he gave her coffee every morning, and cared for her and Rory once they started their lives together in the small town.

Logan was a part of Rory that she needed to explore, but could never fully become. He was Hartford and charity events, Jess was Stars Hollow, New York, and Philly, and drinking coffee while reading a book.

How It Was (Probably) Supposed to End for Lorelai

Was the Christopher/Luke comparison not enough to convince you? Even though Sherman-Palladino ended Season 6 with Lorelai and Luke breaking up, I don't think she would've kept it that way. Sometimes, drama is simply needed to fill an episode order. She wrote the ending of Lorelai waking up with Christopher, but that was Lorelai's safety net. It doesn't mean they would've ended up together.

The storyline of Christopher and Lorelai's failed marriage in season seven was strange, but I think the new writers got it right when Lorelai kissed Luke in the finale. Their relationship was built over the seven seasons, Lorelai and Christopher's was essentially defined before the show even started.

The only other major change that was missing from the seventh season was some kind of resolution between Lorelai and her parents. Not that they had to suddenly become a perfectly happy family, but there should've been some moment of understanding. It can be argued that the whole series was their relationship gradually being pieced together, but I think it could've been showcased better than it was in the finale, when the grandparents attend Rory's Bon Voyage party. Maybe if Luke and Lorelai's relationship hadn't been derailed for so long, it could've occurred at their wedding.

Where To Go From Here

Step 1) The Palladino's write a script.

Step 2) All of the above actors, plus other latecomers, assemble.

It's that simple! The busiest cast member today is Melissa McCarthy, but I'm sure she could squeeze in some time for the show that gave her the best role she's had to date. Sherman-Palladino may not be able to erase the final season, but I'm sure she can find a way to re-route back to the ending she imagined. Lorelai and Luke can finally get married, and their wedding will be both where Rory and Jess reunite and Lorelai shares her special moment with the elder Gilmores.

Please, Amy, Daniel, Hollywood, Netflix, whoever else I need to beg, please make it happen. Give the Gilmore Girls the ending they deserve, and let us finally discover what the last four words of the show were supposed to be.