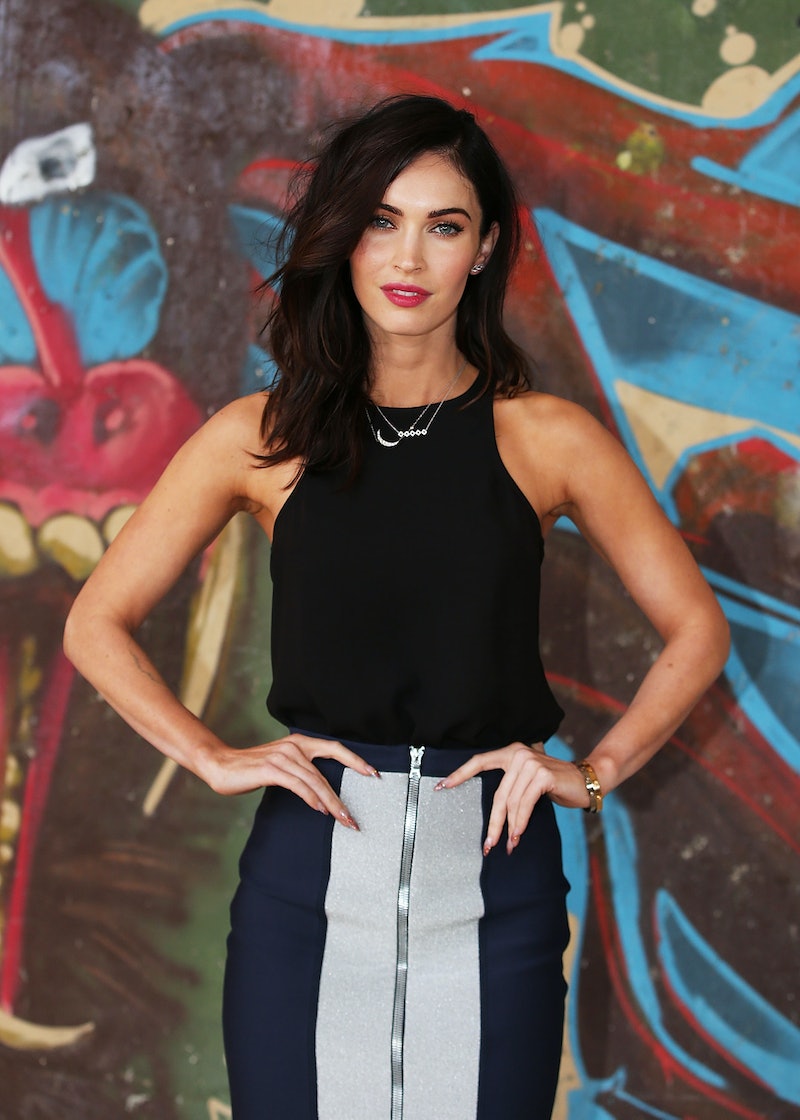 Alright, guys, let's be real here: losing your virginity is a topic that no one really wants to talk about. It doesn't matter if your first time was with someone who meant a lot to you, with someone random at a party, if it was a grand, romantic scene straight out of a movie or, frankly, not that big a deal... everybody has some kind of story, from awkward to awesome, that shows their first time was an experience. Talking about losing your virginity is almost as awkward as actually doing it, but thankfully, there are plenty of celebrities who have opened up about what it was like to lose their v-card, and their stories range from hilarious to heartbreaking and everything in between.

Celebrities often open up about normally "taboo" topics and many aren't shy about discussing their sex lives, but there's something about discussing virginity that makes many people uncomfortable. These celebs shatter that notion by opening up about their first time, and if I'm being honest here, some of these quotes will make you feel better about your first time, no matter how awkward it was. So, if your first time wasn't all it was cracked up to be, fear not: you are definitely not alone.

The Girls creator penned a poignant essay for Rookie about her first time, to a guy in college she liked. Dunham wrote:

I didn’t tell him I was a virgin, just that I hadn’t done it “that much.” It hurt a little more than I’d expected but in a different way, and he was nervous too and he never came. Afterwards we lay there and talked, and I could tell he was a really nice person. I commended myself for making a healthy, albeit hasty, partner choice. I really couldn’t wait to tell my mom.

Radcliffe reports that he was "one of the few people who seem to have had a really good first time," explaining to Elle magazine, "It was with somebody I'd gotten to know well. I'm happy to say I've had a lot better sex since then, but it wasn't as horrendously embarrassing as a lot of other people's were — like my friend who got drunk and did it with a stranger under a bridge." Yikes!

Elgort admitted his first sexual encounter was less-than-stellar, telling Elle, "I was 14. I had no clue what I was doing, and neither did the girl. I didn't even make the lighting good. That'd be one thing I'd do differently. It was, like, fluorescent, bright bedroom light, like, over the covers." Ha, aww!

Khloé revealed to HLN in 2012 that her "situation was not a good situation." She said,

I was 14 years old and dating an 18-year-old boy, which now I look back and think it's disgusting, but then I thought I was really cool ... Basically, I got pressured into having sex. I wasn't ready. I barely knew my own body ... I felt like if I didn't, I would not be cool or this guy wouldn't want to talk to me anymore ... I didn't have sex for the next three years, just because I didn't feel comfortable with my own body and I didn't feel like I knew myself. And then being out of that environment, I knew I did the wrong thing and I was kind of forced to have sex.

The Jersey Shore star was also 14 when she first had sex, and doesn't have wonderful things to say about the experience. She told YourTango in 2013, "I was 14. I mean, in upstate New York there's really nothing to do up there but experiment. He was a senior, and I thought he liked me but turned out he was just a jerk. So, it was terrible."

On losing her virginity to fellow actor Michael Weatherly, Alba told Cosmopolitan magazine in 2005, "I was so young, 18, when I started dating him. I was a virgin. I knew I wanted to be in love with the first person I slept with, because for almost everyone I knew, the first experience made them feel like sh*t. So I wanted to be really careful that he was going to be in love with me and wasn't just going to leave me."

Silverman wrote of her first time having sex in her book, The Bedwetter: Stories of Courage, Redemption, and Pee, and said she mistakenly thought she'd had sex prior to her first time, but realized quickly that she hadn't, revealing, "When Kevin asked me if I was a virgin, I answered honestly: no. Somehow I think he knew better than me, because he pretty much instructed me through the whole process. He talked me through my first blow job (that, I admitted I had never done before), what to do with my tongue, what not to do with my teeth, and so on. And then, slowly at first, he pushed inside me. All the way inside. And all I could think was, 'Holy sh*t, THIS is sex, dummy.'"

In her 2001 autobiography My Story, My Dream, Dion revealed pretty much all the details about her first sexual encounter with her late husband René Angélil, leaving no detail untouched. Dion says, "It was in Dublin, on that unforgettable day of April 30, 1988, the evening of the Eurovision competition. He went back to my room with me ... I was seated at the head of the bed, legs folded under the covers. I was happy about being alone with the man I loved. And I had a very precise plan."

After the singer revealed he'd lost his virginity at 13, Elle asked him if there was anything he'd do differently. Thicke quipped, "Make it last longer than 30 seconds."

In true Tina Fey fashion, she had a great sense of humor about losing her virginity at the age of 24. When asked by David Letterman about being a part of a group of celebs including Adriana Lima, Chris Martin, and Brooke Shields that waited until their twenties to do the deed, Fey quipped, "See, all the other people, that was a choice on their part. That one lady's a Victoria's Secret model. She made a choice ... I couldn't give it away." She did reveal that her first partner was now-husband Jeff Richmond. So sweet!

Though he and his brothers famously wore purity rings at the height of their stardom, Joe admitted to Vulture magazine, "I lost my virginity when I was 20. I did other stuff before then, but I was sexually active at 20. I’m glad I waited for the right person, because you look back and you go, 'That girl was batsh*t crazy. I’m glad I didn’t go there.'" Well, OK!

In 2010, the actor wouldn't tell Cosmopolitan magazine who she lost her v-card to, but did say, "I've had plenty of awkward sex, but that first time was not awkward. I was in love with him, and it was nice." Lovely.

Ritter had a hilariously high school story to tell about her first time having sex, telling Playboy ,

He was so angsty and bad. He was a real bad boy. He gave me a school picture that year that said, "OK, Krysten, I love you. You give me a boner." That’s how we started dating. His name was Damian, but my parents called him “Demon.” Our first time was in his parents’ van before basketball practice. I don’t remember it being very pleasant.

The Sister, Sister star admitted she felt guilty about losing her virginity at the age of 29, telling HOT 97 in 2013, "I don't know how to explain this. I'm religious, so I waited until I was 29 to lose my virginity. You may not understand this [but] I did it, then I felt guilty, then I became celibate until I got married."

Though Kim Kardashian has admitted she doesn't like to talk about sex in interviews, she did tell Oprah Winfrey in 2012, "When I did want to have sex the first time I was almost 15 ... I was like, 'I think I'm going to, or I want to,' and she [her mom, Kris Jenner] was like, 'OK, so this is what we're going to do, we're going to put you on birth control,' and she was, like, really open and honest with me."

In her 1993 memoir I Can't Believe I Said That , Gifford discusses her first sexual encounter on her wedding night with her first husband, Paul Johnson. She writes:

I'm sorry, but anyone who's instantly relaxed with being naked in front of somebody for the first time and having someone explore intimate parts of the body is either lying about being relaxed — or lying about it being the first time. But [I had] some raging hormones going. I mean I was ready! My lifelong self-consciousness about my body seemed, miraculously, to fade right away ... Let me tell you, I really did look divine. Relaxed? Forget it! It was, like, yabba dabba doo! I lost every inhibition I'd ever had. It was time for candles and romance, time to boogie and swing from the chandeliers.

Yet we just couldn't seem to get relaxed with each other. It saddens me to think about it now. We were so uncomfortable with each other, and I felt responsible and disappointed for both of us. I spent the first night of my married life sobbing my eyes out, feeling we had just made the biggest mistake of our lives.

The rocker penned an essay for Rookie , telling a sweet and funny story about her first time:

I had a lot of experience with the other three bases by the time I finally lost my virginity in the fall of my freshman year of college. I was the last one of all my friends to do it, and I tried to pick a really good guy. He was a senior and captain of the soccer team as well as sitting chair of the Student Honor Committee. I had ceased to think there was anything anatomically wrong with me, but I was so nervous that I actually said these words to him: “If you’re not nice to me, my ex-boyfriend said he would beat you up.” I actually said this. I cringe to this day. Luckily, he saw through my Lisbeth Salander routine and was very sweet and gentle with me. When the deed was done, I felt tremendous relief.

The actor said that her biggest health regret was intimately tied to losing her virginity, telling Health magazine in 2009 that she regrets:

Long before he was married to Mila Kunis, Kutcher had a very awkward sexual encounter. He told Details in 2008 that he was 15 and "It was out in the woods with a girl I had just met who my buddy set me up with. The whole thing lasted two seconds. It was really awkward. Two years later I had sex with her again just to show her the first performance was a fluke and I’d gotten better."

Hopefully, some of these stories will make you feel better about your experience, regardless of whether it was not that bad or downright horrible!

For more sex and relationships talk from Bustle, check out our podcast I Want It That Way: