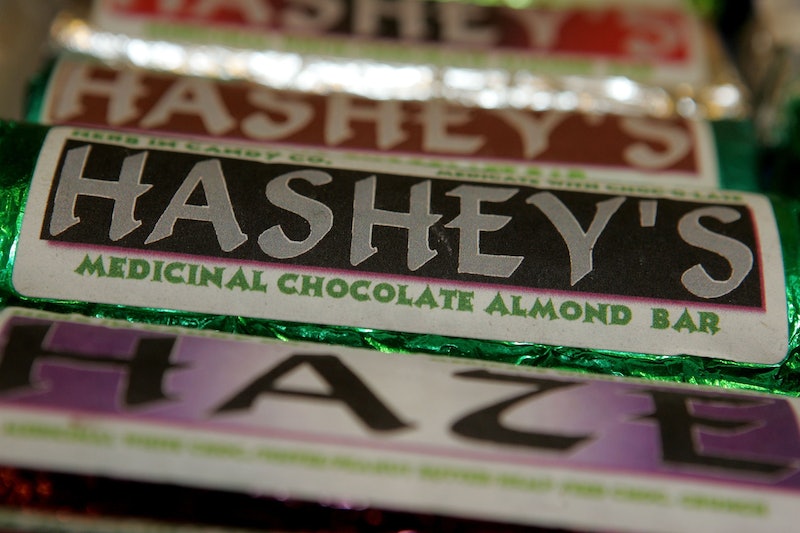 Edibles have been around for as long as marijuana and ovens have happily coexisted. So why are they suddenly in the news? Well, fresh concerns are being raised over the treats as Colorado officials encounter the difficulty of regulating weed-laced foods. Along with marijuana in its traditional form, edibles were legalized in the state on Jan. 1, and a cottage industry quickly sprung up, transforming foods like beef jerky and fudge into feel-good, and medically beneficial, versions. But while the packaging is labelled and often looks harmless, a rise in the number of children and pets being admitted to the hospital after eating THC-laced foodstuffs has prompted critics to suggest enforcing tighter restrictions on marijuana in food-form.

In a frustrating catch-22, Colorado can't rely on the Centers for Disease Control and Prevention or the Food and Drug Administration to provide regulation and expertise because marijuana is still illegal at the federal level. Regulations over marijuana legalization were cobbled together in a mere four months by the Marijuana Enforcement Division of the Department of Revenue; the Colorado Department of Public Health receives some federal funding, so their oversight remains out of the question.

Edibles are fast becoming big business in the state: Dixie Elixirs and Edibles, a Colorado-based company that offers such wares as Sparkling Mandarin Elixir (but not pot brownies, telling the New York Times that they are too "cliche"), is about to build a 30,000-square-foot manufacturing hub and warehouse just to keep up with the demand.

Although Colorado introduced packaging, labeling and safety standards for marijuana edibles last year, the strength and dosage of THC, the active ingredient in marijuana, often varies — another reason why edibles are more tricky to regulate. There is an array of products with varying THC levels, and unlike smoking marijuana, edibles have a delayed effect in getting the consumer high.

"My first concern is not about health risks, but that is all dosage forms in elixirs, cookies, candies and soda pop can't possibly be stable in all different deliveries of the drug," Paul Doering, professor of pharmacy practice and co-director of the Drug Information and Pharmacy Resource Center at the University of Florida, told ABC. "What a lot of people enjoy about marijuana is the rapid onset from smoking - within minutes the effect begins to take place in the brain."

While edibles provide a smoke and inhalation-free way of getting high, there are also worries that products can more easily fall into the hands of children. The proliferation of the edibles industry draws worrying comparisons to "Big Tobacco," according to Project SAM, which is concerned that the infant marijuana industry could go in the same direction.

Edibles are one of the most profitable aspects of the marijuana industry, according to Kevin Sabet, one of the co-founders of Project SAM. But for some patients, conditions prevent them from smoking marijuana, so edibles are the only way to ingest their treatment, according to the Marijuana Policy Project.

Meanwhile, among new calls to restrict and regulate weed-infused foods, Georgia state representative Allen Peake introduced a new bill last week that seeks to legalize a non-psychoactive strain of marijuana for patients with severe seizure disorders. The introduction of the bill is a relative first for a the South — medical marijuana is not currently legally available in any southern state. And while the issue of marijuana legalization has been the purview of Democratic states, more Republicans are beginning to support the issue.

"It really seems like finally, legislators are catching up with the will of the people," Erik Altieri, spokesman for the Washington-based pro-marijuana group, NORML, told Reuters.

Obstacles still stand in the way of the Georgia bill: in addition to a long waiting list for a key extract that helps treat seizures, for now, importing cannabis compounds to Georgia is illegal.