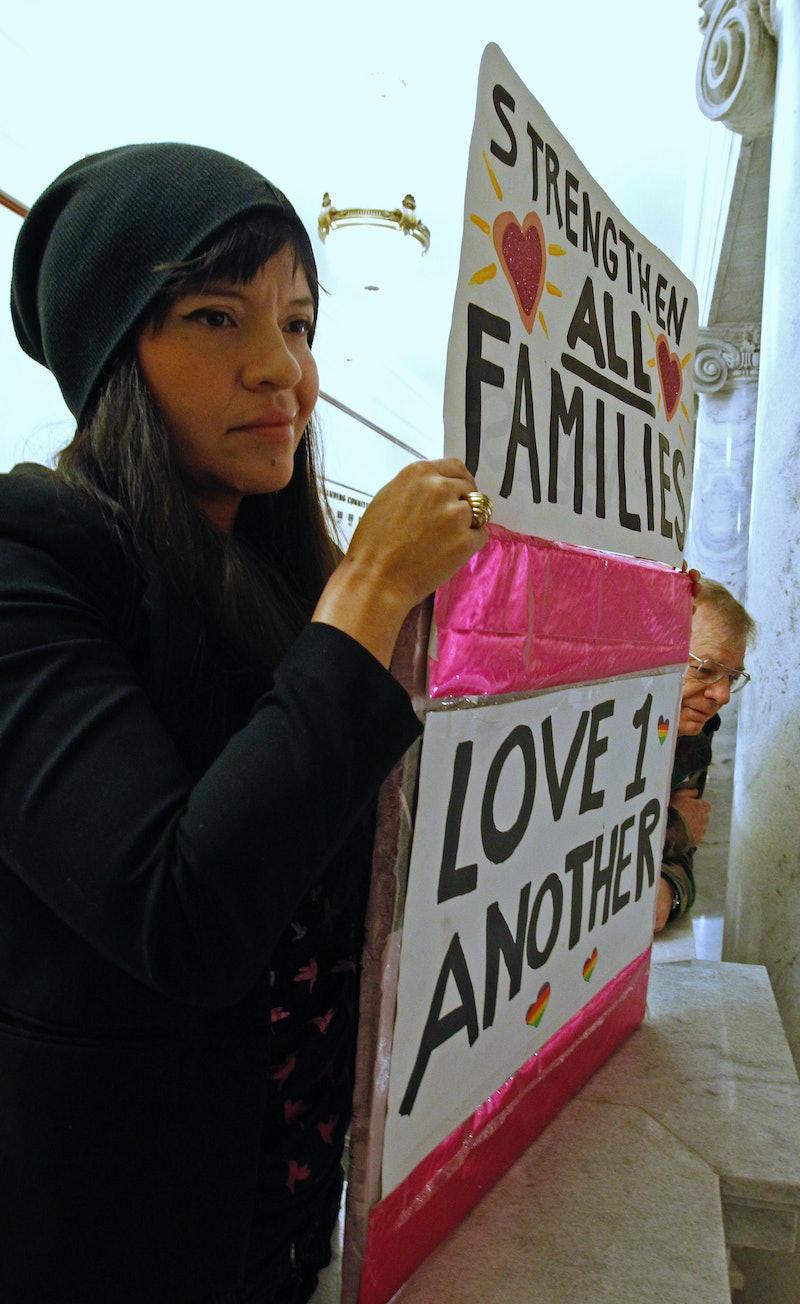 The same-sex marriage saga continues in Utah Tuesday, as the state files its opening arguments to reinstate the conservative state's gay marriage ban, which was (first) overturned by a judge in late December. Utah's primary argument? That gay marriage is bad for children. Meanwhile, on the other side of the country, a Virginia federal judge will begin hearing the same case, on a different side: Bostic v. Rainey, a lawsuit aiming to overturn the state's constitutional ban on same sex marriage (a challenge supported by the Virginia's new attorney general, Mark Herring, no less). One courtroom to make it illegal again, the other to make it legal — oh, the drama!

In his opening arguments, Utah's attorney general made the statement that banning gay marriage is in the best interests of children — a classically-flawed argument that posits only straight parents can raise good kids. In their statement, the state pits the long-term interests of kids against the "emotional interests" of adults, reports the Salt Lake Tribune.

Utah has chosen a definition of marriage that is "principally a child-centered institution, one focused first and foremost on the welfare of children rather than the emotional interests of adults," the state said. "And by reinforcing that understanding, the state gently encourages parents to routinely sacrifice their own interests to the legitimate needs and interests of their children."

The state also argues that redefining marriage as "genderless" will result in lower reproductive rates (which is totally the reason more people don't live in Utah).

Even though gay marriage technically isn't currently illegal in Utah, thanks to good old Judge Shelby, there's been a hold placed on marriages by the Supreme Court while Utah's case sees its way through the appeals court in Denver. Attorneys representing the three same-sex couples suing Utah for marriage rights have until Feb. 25 to file their response. Oral arguments begin April 10, so there's still a long way to go.

Virginia's new Democratic Attorney General, Mark Herring, is all about same-sex marriage. Herring said two weeks ago he believes the ban to be unconstitutional, and has filed a lawsuit to overturn the ban. As Bustle reported, it marks an evolution in thinking for Herring:

Putting Virginian’s first is his mission, Herring says, and during his campaign for attorney general last year he pushed for marriage equality. But he wasn’t always so progressive. The Democrat tells NPR he voted against same-sex marriage as a senator in 2006, citing that at the time he was speaking out against discrimination. He admits he was wrong, saying “it was very painful for a lot of people.” Discussing it with co-workers, constituents, and family — particularly his children — helped spur the shift in his views.

Notably, the lawsuit has a legal "dream team" behind it — the same guys who helped overturn Prop 8 in California. As Bustle reported:

Olson and Boies, with the backing of The American Foundation for Equal Rights, will join in on a lawsuit filed by Tony London and Timothy Bostic, a gay couple from Norfolk, Virginia who were denied a marriage license in July. A ban on marriage between same-sex couples was approved by Virginia voters in 2006 and has remained in place ever since. According to Olson, Virginia is a great state to target the fight against bans on gay marriage due to the stringency of its law, “The more unfairly people are being treated, the more obvious it is that it’s unconstitutional,” he said.