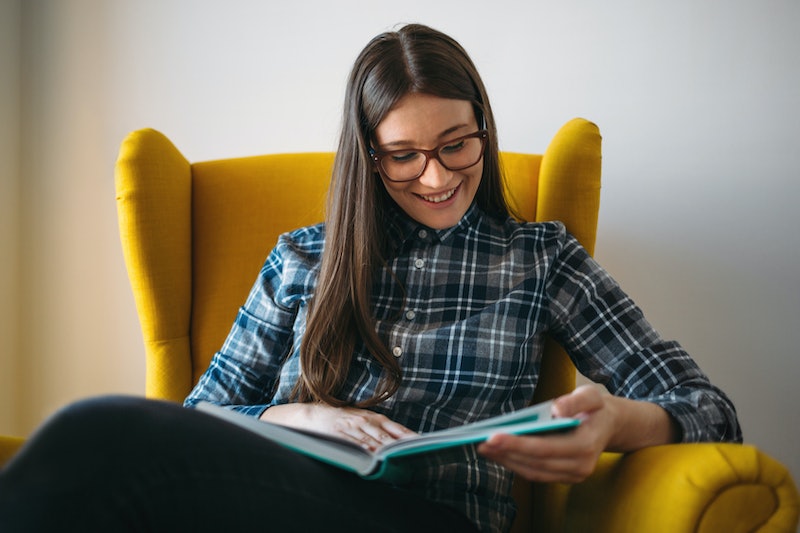 With the rise of women like Amy Schumer, Mindy Kaling, Amy Poehler, Leslie Jones, and Kirsten Wiig, we’re seeing women in comedy shining in the spotlight and fighting the lame stereotype that women can't be funny. Why is this so important, and why is it important that women write comedy for young girls? Four 2016 YA authors shared their own personal answers to this question.

Each of these authors — The Square Root of Summer's Harriet Reuter Hapgood, Accidental Superstar's Marianne Levy, Starstruck's Jenny McLachlan, and Head Over Heels' Holly Smale — have their own reasons for why they write comedy for young women, and each reason is incredibly important. These authors are offering more than just laughs (though they do offer loads of those); they're fighting the darkness, sexism, and social expectations. Their fiction is helping lighten the way teenagers look at, and feel about, the world. Humor isn't meant to erase reality, but it helps teenagers to understand and appreciate reality for what it is, without wildly blowing it out of proportion.

These women write about death, falling in love (and falling out of it), friendship, and family in a funny, relatable way — one that teenagers (and even we grown-ups) can appreciate. Does that humor directly affect how relatable the fiction is? You'll see that at least these four writers think that yes, yes it does.

Here are Hapgood, Levy, McLachlan, and Smale in their own words, about why they write YA books that will make us laugh.

1. Harriet Reuter Hapgood, Author of The Square Root of Summer

Harriet Reuter Hapgood, author of The Square Root of Summer, discussed with me why she feels humor is particularly important when discussing dark themes:

I love stories about adolescence because there’s no context yet when you’re a teenager, no distance or experience to help you assess what’s important overall versus what’s important right now. Everything — from parties, to pimples, to exams, to love, to death — holds equal significance. It’s intense — there’s something inherently funny in that, and true. YA is life writ large.

I wouldn’t want to write 350 pages of unrelenting bleakness — who would want to read that? It wouldn’t ring true. Even in The Square Root of Summer, a book about heartbreak, grief and loss, there’s a dozen puerile penis jokes and a heavy-metal outfit called "Fingerband." There’s a funeral scene taken from real life, a day when I wept until I was hollow, but also stifled giggles as the eco-friendly willow coffin — which looked like a picnic basket! — squeaked rhythmically as it was carried down the aisle. It was horrible and it was funny at the same time.

Marianne Levy, the voice of Britain’s Next Top Model and author of Accidental Superstar (released January 2016), thinks humor is necessary in fiction for teenagers in order to shed light on the reality of life:

I’m currently writing funny books for teenagers. Why have I chosen to make them funny? Everyone knows that teenagers are complicated, morose creatures, trapped in their own personal pits of angst-ridden despair. I look back at my time as a teen, and indeed whenever I catch a group of young people, my ears are filled with laughter. Think about it: you’re juggling the expectations of your peers, your parents and your teachers, you’re oozing hormones and spot cream, and while you feel like an adult, the world persists in treating you like a kind of enormous child. You have to laugh. Either that, or flush your own head down the loo.

Romance involves kissing, which is intrinsically disgusting and embarrassing, and therefore utterly hilarious.

Even if I were to write in another genre, I think I’d find it hard to ditch the jokes. It’s how I see the world. Romance involves kissing, which is intrinsically disgusting and embarrassing, and therefore utterly hilarious. My current heroine, Katie, is very worried about kissing. Her main fear is of barfing into the other person’s mouth. Humour surrounding that which frightens us makes everything seem a little better.

Jenny McLachlan, author of the Ladybirds series (the latest of which is Starstruck), discusses how she felt that she had to hide her humor as a teen. Now, she wants to encourage teens to let their funny flags fly.

Before I wrote Flirty Dancing, I spent three years trying to write a deeply serious adult novel about the First World War, but no matter how hard I tried it always sounded painfully artificial. I can vividly remember the relief I felt when I sat down and started writing Flirty Dancing. I automatically used the first person and Bea’s story poured out of me… and so did all the jokes. Finally I could use the phrase "glittery ninny." What a relief!

One of the reasons I write comedy for teenagers is because when I was a teenager I was extremely shy and I went to great lengths to hide my sense of humor. Later, when I became a teacher, I noticed that quite a few of the girls I taught also suppressed their funny side; they wrote hilarious stories, but rarely made jokes in class. Boys typically took on the role of class entertainer. This situation is changing very quickly, and girls now seem aware that they should show off their quick wit. I think comics like Amy Poehler and Tina Fey are fantastic role models for teenage girls.

I definitely found it therapeutic to let Bea loose on the world and finally reveal all the funny, naughty thoughts I’d been having when I was a teenager. Although my books are comic, they also deal with some serious issues; I hope the comedy helps my teenage readers feel able to cope with what life is throwing at them. Just think about it: periods, bras, first kisses, rejection, crushes… laughter is really essential in these situations!

Holly Smale, author of the bestselling, award-winning Geek Girls series (Head Over Heels, the fifth installment, comes out in April), hilariously discusses how she fights sexism with funny literature for young adults:

“You’re funny, for a girl.” It’s a sentence I’ve heard far too many times, given that I am both a fully grown woman, and as far as I know, the owner of a sense of humor that does not originate in my nether regions.

“You’re funny, for a girl.” It’s a sentence I’ve heard far too many times, given that I am both a fully grown woman, and as far as I know, the owner of a sense of humor that does not originate in my nether regions.

I write comedy because I’m a woman; not, somehow inexplicably, in spite of it. It’s a part of how I see the world; how I process things, and how I always have. Whenever I’ve tried to write "serious" fiction, it’s always felt fake and flat: as if I’ve squeezed the natural joy and comedy out of life in an attempt to take myself and the world too earnestly, or to make myself sound more important and intelligent. Comedy is my way of making myself happy, but it’s more than that. Without light there can be no dark, and humour gives us that contrast: it heightens other emotions rather than undermining them, and it provides stories with depth, with realism and spark, with beauty and diversity.

For teenagers, that is key. Life is funny, even in its darkest moments, and to remove wit is to diminish how wonderful and how powerful that can be. Teenagers need to be reminded that anything thrown at them can be handled more easily with a sense of humour: that laughter is the best weapon we have. It’s OK to laugh. It doesn’t make them less substantial to see the funny side: beauty doesn’t always come from pain.

For women, a sense of humor is essential. We still live in a patriarchal society that has, over many centuries, subtly taught us that men are valued for what they say and how they think, and women are precious because of what they look like. We have been constantly reminded that comedy is a male arena, and women should not try to compete in it: that our voices are not valid enough, or loud enough, or brave enough, or that male laughter is somehow more worthy. In fact, the ability to laugh at a situation — to speak out on it, to poke fun at it — is one of the most feminist, powerful tools we have.

For me, comedy gives life warmth and beauty, it gives us strength and it gives both men and women an intelligent, powerful voice. I’m not funny for a girl. I’m funny because of it.

And that means I take comedy very seriously.

Clearly, comedy for young women is essential. Humor allows us to explore dark realities without feeling weighed down. I mean, if you didn't laugh when Smale said "nether regions," you're just not living. All while fighting sexism. Bravo.