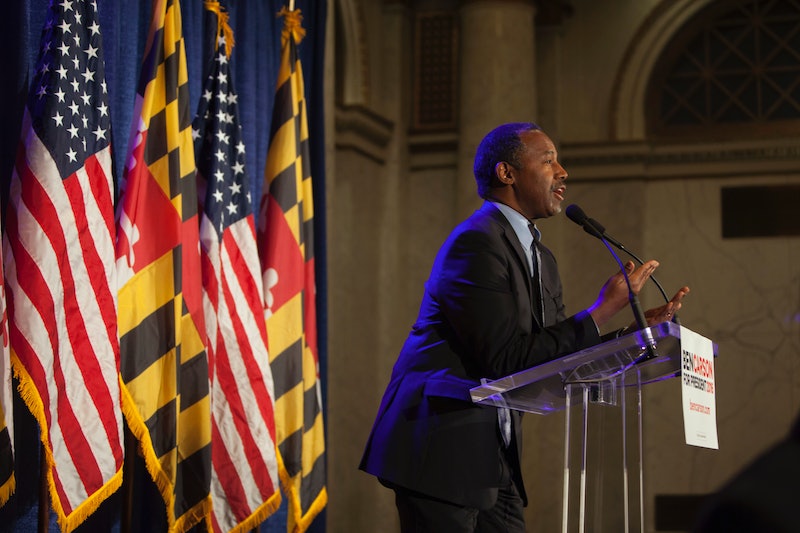 The day after Super Tuesday, when he saw absolutely no wins, Ben Carson announced that he's not dropping out of the presidential race. Wait, what? The Washington Post reported Wednesday that Carson will not attend Thursday's umpteenth Republican debate because he no longer sees a "path forward" to the presidency. So he's dropping out, right? Nope! Guess again. Carson will not formally suspend his campaign, but will make a speech on Friday, presumably about his plans for the future. What this exactly means is hard to parse, but one thing is for sure: The United States will not see a President Ben Carson (or even a Republican nominee Ben Carson).

In a statement, Carson tried to explain his decision to skip the debate and why he thinks there's no path forward, but stopped short of saying that he's completely out of the race. Thanking his supporters, he claimed that his decision is not dictated by finances, but what is in the best interest of Americans. And considering how on Super Tuesday, conservative America said that Carson is the presidential nominee they want the least, this makes a lot of sense. Carson wrote in his statement:

I do not see a political path forward in light of last evening’s Super Tuesday primary results. However, this grassroots movement on behalf of “We the People” will continue.

Carson, who has absolutely no political experience, actually saw a brief surge in popularity back in October. But after stories of discord within his campaign and a series of staff resignations, including that of his campaign manager, there was no coming back, and Carson was quickly overshadowed by Ted Cruz, and later Marco Rubio as well.

Even if Carson isn't ready to quit, we all know what skipping a debate does to presidential candidates. After frontrunner Donald Trump passed on the Fox News' debate in Iowa, he promptly lost the caucus there to Ted Cruz and quickly realized the importance of attending the events. So Carson knows what he's getting into. Saying that he'll skip the Fox News debate in Detroit (which is his hometown) is a sure sign that he understands his defeat. Why he doesn't just rip the bandage off now and call it a day is the biggest question of all.