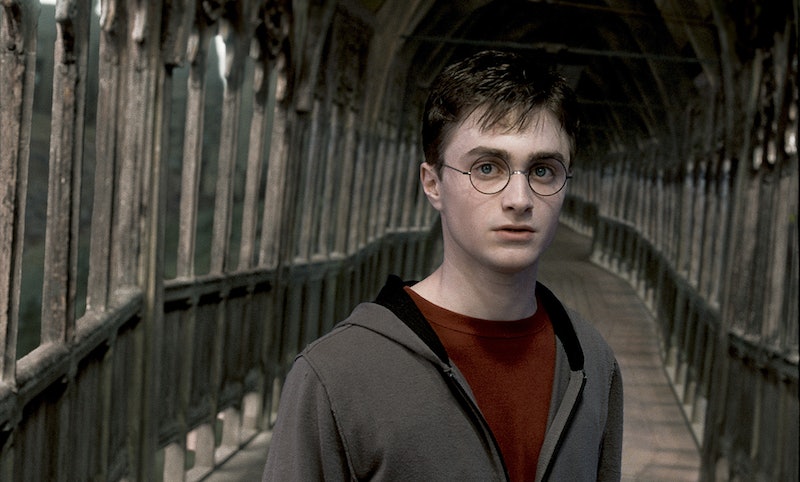 It takes a certain amount of perseverance to read the Harry Potter series. After all, though the books are extremely entertaining, and the story is inspiring and full of adventure, it is quite long. There are seven books, and the last four are pretty thick, so if you’ve read the series you already know a little bit about being determined.

Luckily there are plenty of quotes in the series itself to encourage you to persevere — both as you read the series, and as you go through life. Because Harry didn’t exactly have an easy seven years at school: his course work was tough, his friends had a lot of drama, he was constantly dealing with the fickle friend (fame), not to mention that Voldemort kept trying to rise to power. Talk about a busy schedule to balance.

Maybe there were days when Harry just wanted to stay in his four-poster bed all day, Wizflix (if you’re listening, J.K., that’s my idea for the wizarding version of Netflix). Or maybe he just wanted to stock up on Polyjuice potion, grab the hair of a random person, and disappear into a crowd. But instead, Harry — and many other Harry Potter characters — stayed true to the course, and conquered the evil forces threatening their world. Here’s some inspiration from their journey.

1. “Listen to me, Harry. You happen to have many qualities Salazar Slytherin prized in his hand-picked students. His own very rare gift, Parseltongue — resourcefulness — determination — a certain disregard for rules,” he added, his mustache quivering again. “Yet the Sorting Hat placed you in Gryffindor. You know why that was. Think.” “It only put me in Gryffindor,” said Harry in a defeated voice, “because I asked not to go in Slytherin…” “Exactly, “said Dumbledore, beaming once more. “Which makes you very different from Tom Riddle. It is our choices, Harry, that show what we truly are, far more than our abilities.”

2. "Forward, Neville, and finish him off!" said Lupin as the boggart landed on the floor as a cockroach. Crack! Snape was back. This time Neville charged forward looking determined. "Riddikulus!" he shouted, and they had a split second's view of Snape in his lacy dress before Neville let out a great "Ha!" of laughter, and the boggart exploded, burst into a thousand tiny wisps of smoke, and was gone.

3. Full of determination, the team started training sessions, three evenings a week. The weather was getting colder and wetter, the nights darker, but no amount of mud, wind, or rain could tarnish Harry's wonderful vision of finally winning the huge, silver Quidditch Cup.

4. "Listen, Harry — perhaps we should leave it here for tonight. This charm is ridiculously advanced.... I shouln't have suggested putting you through this...." "No!" said Harry. He got up again. "I'll have one more go! I'm not thinking of happy enough things, that's what it is.... Hang on...." He racked his brains. A really, really happy memory... one that he could turn into a good, strong Patronus... The moment when he'd first found out he was a wizard, and would be leaving the Dursleys for Hogwarts!

5. Harry shook his head and applied himself to his scrambled eggs. His and Ron’s lack of enthusiasm had done nothing whatsoever to curb Hermione’s determination to pursue justice for house-elves.

6. “If your determination to shut your eyes will carry you as far as this, Cornelius,” said Dumbledore, “we have reached a parting of the ways. You must act as you see fit. And I — I shall act as I see fit."

7. "You’ll need to demonstrate the ability to react well to pressure and so forth,” said Professor McGonagall, “perseverance and dedication, because Auror training takes a further three years, not to mention very high skills in practical defense. It will mean a lot more study even after you’ve left school, so unless you’re prepared to —” “I think you’ll also find,” said Umbridge, her voice very cold now, “that the Ministry looks into the records of those applying to be Aurora. Their criminal records.” “— unless you’re prepared to take even more exams after Hogwarts, you should really look at another —” “— which means that this boy has as much chance of becoming an Auror as Dumbledore has of ever returning to this school.” “A very good chance, then,” said Professor McGonagall.

8. The cut on the back of Harry’s hand had barely healed and by the following morning, it was bleeding again. He did not complain during the evening’s detention; he was determined not to give Umbridge the satisfaction; over and over again he wrote I must not tell lies and not a sound escaped his lips, though the cut deepened with every letter.

9. “Well, now —” said George. “— what with Dumbledore gone —” said Fred. “— we reckon a bit of mayhem —” said George. “— is exactly what our dear new Head deserves,” said Fred. “You mustn’t!” whispered Hermione. “You really mustn’t! She’d love a reason to expel you!” “You don’t get it, Hermione, do you?” said Fred, smiling at her. “We don’t care about staying anymore. We’d walk out right now if we weren’t determined to do our bit for Dumbledore first. So anyway,” he checked his watch, “phase one is about to begin. I’d get in the Great Hall for lunch if I were you, that way the teachers will see you can’t have had anything to do with it.”

10. “To Harry James Potter,” he read, and Harry’s insides contracted with a sudden excitement, "I leave the Snitch he caught in his first Quidditch match at Hogwarts, as a reminder of the rewards of perseverance and skill."

—Rufus Scrimgeour, Harry Potter and the Order of the Phoenix

11. “We’re his army,” said Neville. “Dumbledore’s Army. We were all in it together, we’ve been keeping it going while you three have been off on your own— ” “It hasn’t exactly been a picnic, mate,” said Ron. “I never said it had, but I don’t see why you can’t trust us. Everyone in this room’s been fighting and they’ve been driven in here because the Carrows were hunting them down. Everyone in here’s proven they’re loyal to Dumbledore— loyal to you.”

12. "Let’s not lose sight now of what we’re supposed to be d-doing! We’re the only ones who can end it!”

13. "He knew what he was doing when he gave me the Deluminator, didn’t he? He—well,” Ron’s ears turned bright red and he became engrossed in a tuft of grass at his feet, which he prodded with his toe, “he must’ve known I’d run out on you.” “No,” Harry corrected him. “He must’ve know you’d always want to come back.”