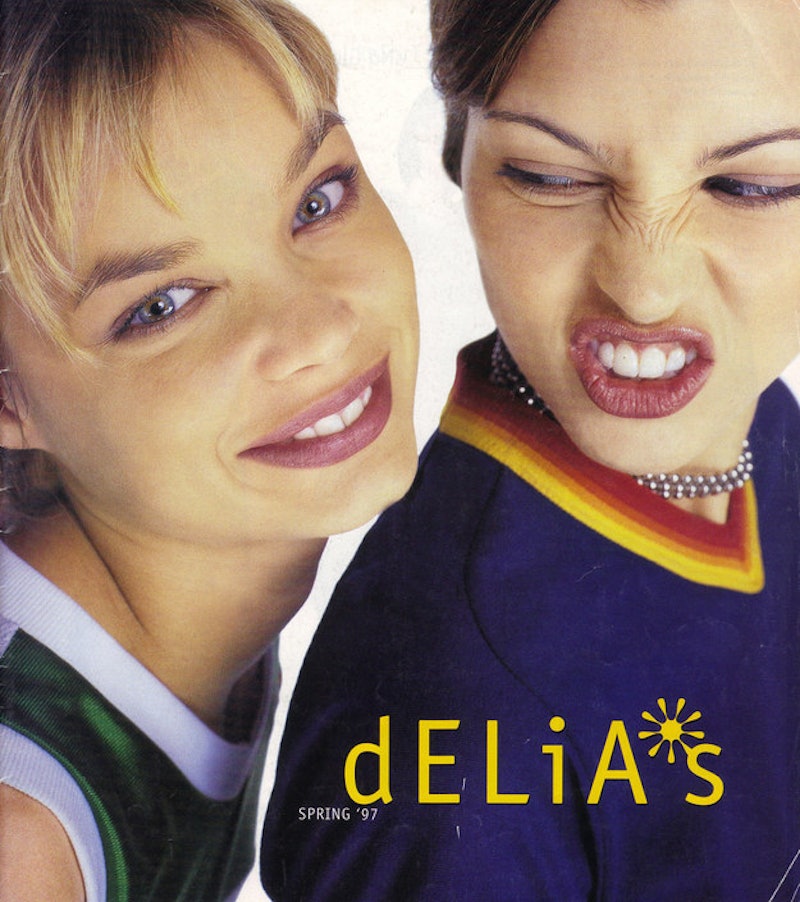 Once upon a time in the mid '90s to early 2000s, dElia*s was the number one girl's fashion destination alongside my own favorite store, Limited Too. The world was a much simpler place then. I wore mostly Paul Frank graphic tees and these terrifying zip-away pants. However, everything changed in 2014 when dElia*s officially filed for bankruptcy. The world we had once known was lost, and all remnants of the past seemed dissolved in a future of online, catalog-free shopping.

However, according to BuzzFeed, dElia*s savior Steve Russo purchased the brand for $2.5 million after the outcry from nostalgic fans struck him. Russo told BuzzFeed, "It was hard to not buy dElia*s when everybody was crying that dElia*s was closing." I feel you, Steve. If dElia*s fans are anything like people on Tumblr, I would have to give in too. dElia*s became solely an online brand aimed towards the teenage demographic during fall of 2015, but Refinery 29 reported that the brand is also creating a magazine that will be mailed out monthly. That sounds like a catalog to me!

Lastly, for those customers who convinced Russo to keep dElia*s around, there will be sizes and clothing designed specifically for them in the future, according to Gothamist. Russo told BuzzFeed, “We don’t want to confuse the customer, but we’re working on some things that will make it so older customers can get products for themselves as well … we want to make sure we’re meeting expectations and then do some really fun things.”

So, it's time to pull out all of your old catalogs and celebrate. Here are a few dElia*s catalog staples that I'm longing for:

It's like a whole other language, but any teenage girl who was cool could still read it!

Paul Frank was a good part of my life for a few years. I had one of these wallets and at least five graphic tees.

I know. It's crazy that platform shoes are coming back into high fashion, but if you still have your dEliA*s flip flops, you may want to take them out.

A jean maxi skirt with Birkenstocks? This was the epitome of cool in the dELiA*s era.

Talk about paying attention to the color wheel! dEliA*s was ahead of their time in this aspect.

Most everything came in some sort of weird floral print, regardless of season.

Yes, I am guilty of loving the peasant top trend.

SuNNieS to sHADe yourself from the terrifying sun. They also came in twenty different colors.

Look at this amazing up-do! The strands of hair hanging from the top was so '90s. Add a headband and it is a perfect look!

These boxy tanks were your go-tos. They came in so, so, many colors to go with your cargo print shorts.

As it turns out you can platform just about anything. These are all the rage over seas.

I'm pretty sure Seth Cohen wore this vest on The O.C. with a Paul Frank shirt.

If I could wear snowboarder shirts every day, I would. I almost did. Ask my mom.

These dresses are so Cher from Clueless. Your dad would so not approve.

If you say you didn't own a pair of these, you are lying to me and yourself. Own it. They were, "MoRe HAndY tHaN A TrUcK fUlL oF CArPEnTErs." That was a literal phrase used in one of the catalogs. Is there a pattern to this language, or not?!

Halter tops or anything that exposed your stomach were perfect. Right, mom?

I can't wait to relive all of our pasts, but in a less awkward teenager body!

More like this
Phoebe Dynevor Serves ‘Bridgerton’ Underboob In Stunning Floral Gown
By El Hunt
Sephora’s First IRL Store In The UK Is *Finally* Confirmed
By Justine Knight
13 Spring 2023 Fashion Trends That Feel So Fresh
By Allie Fasanella
25 Cute Ski Outfits That Look Hot & Keep Away The Cold
By Bella Gerard
Get Even More From Bustle — Sign Up For The Newsletter
From hair trends to relationship advice, our daily newsletter has everything you need to sound like a person who’s on TikTok, even if you aren’t.