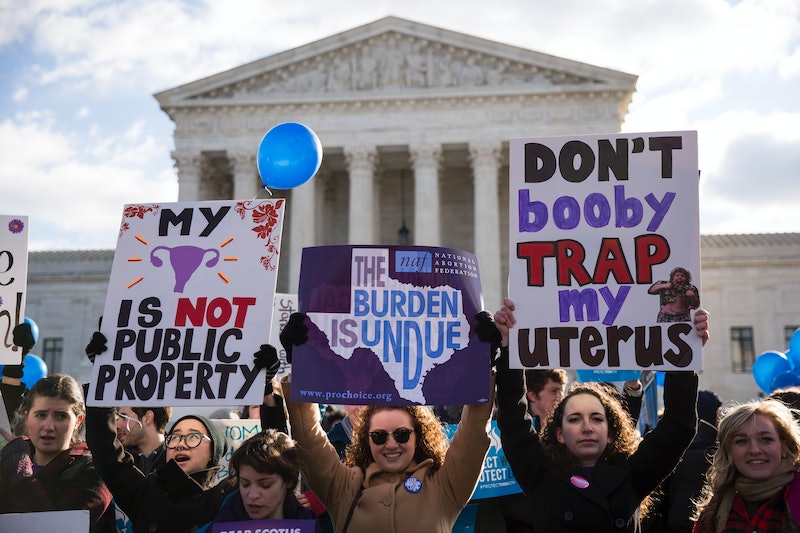 It's not every day that the Supreme Court hears out both sides of a case that carries weight across the nation, and even more rare that a national issue as controversial as abortion is brought before the high court. And as oral arguments began on Wednesday for Whole Woman's Health v. Hellerstedt — likely the most important abortion-related case to come before the court since Planned Parenthood v. Casey in the early 1990s — hundreds of Americans appeared outside the court building to rally against the Texas law up for a SCOTUS decision. And here is the best photo round-up of SCOTUS protesters speaking out on their reproductive rights, because there's no time like the present to ensure women's access to health services continues.

The Texas law that was upheld by a lower court and is now undergoing consideration by SCOTUS orders abortion clinics to be built to the same standards as ambulatory emergency centers, clinics to be within a certain proximity to local hospitals, and clinic doctors to have admitting rights at those hospital. While proponents of the law argue these regulations are necessary for a medical procedure as serious as an abortion, advocates of reproductive rights claim the law's actual intention is merely to make it near impossible for abortion clinics to exist in the state. And more than a few of those advocates refused to sit at home while the high court deliberates over the case details, standing outside the Supreme Court with signs in hand.

"Must Be Literally Accessible"

Because word of law doesn't matter a whole lot if it's not realized in practice.

The Gal Dressed As A Human Uterus

Can I borrow this work of art for this year's Halloween? Every man and woman should get at least one opportunity to become a human uterus for a day.

From North Carolina To D.C.

Finding the courage to protest outside the highest court in the country is hard enough. Busing across several states to do it is another story all together.

Nothing warms the heart more than a story of three generations of women demonstrating in the name of their uteruses.

SCOTUS was lit, with the fire of two thousand men and women who'd like to see the Texas law overturned.

Have you ever witnessed a scene so colorful and so humorless at the same time?

"An Attorney Who Had An Abortion"

Because if you're not a fan of the law, you become the law. Right?

Though the arguments are currently being presented before the high court, a decision on the Texas case is not expected until June.