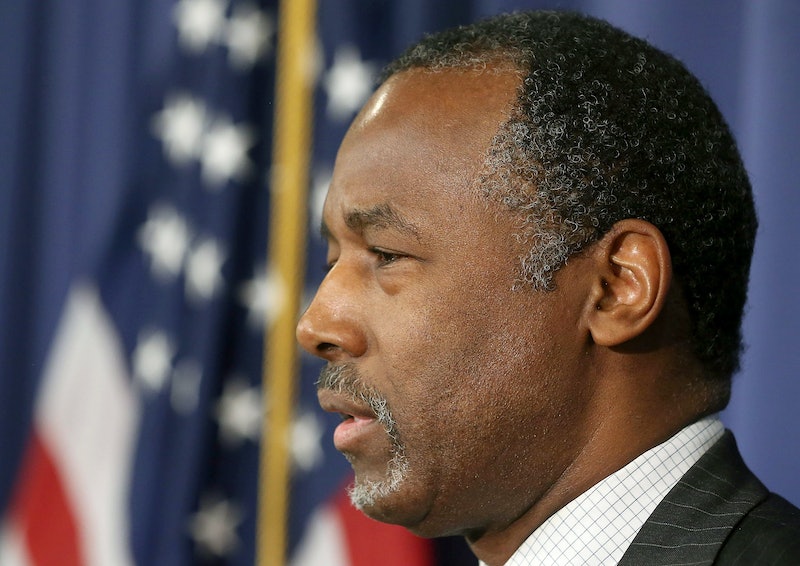 It seems that the GOP field has again been winnowed. Dr. Ben Carson of Maryland has effectively halted his campaign operations. He released a statement on Wednesday, saying "I do not see a political path forward in light of last evening’s Super Tuesday primary results," and said he'd give more information during his pre-planned CPAC speech on Friday. So, what happens to Ben Carson's delegates and supporters after his Friday speech?

The short answer is this: only after the GOP convention rules and bylaws are finalized in July by the Convention Rules Committee will we have a definite answer. According to CNN, Carson has the support of just seven delegates, and can claim only one outright geographical win to his name: the 38th state legislative district in Alaska. Even in comparison with Rubio's low delegate count, that's a pretty poor showing. Interestingly, Donald Trump came in last in the 38th. For those looking for a way to stop Trump, perhaps a visit up to the western coast of Alaska to see what is (or isn't) in the water would be money well spent.

With this shaping up to be one of the most intense convention seasons in recent memory, Carson's reluctance to definitively speak out could be a ploy to buy some breathing room and gauge popular sentiment in the lead-up to his CPAC speech. That's the generous interpretation; a less generous one would be that the campaign is scrambling.

In the same statement, Carson also announced his intention to skip Thursday night's debate in his home city of Detroit. This comes on the heels of his remarks calling the remainder of the Republican candidates to attend a private meeting prior to the debate to talk about the tenor of the campaign so far. "A house divided cannot stand, and it is imperative the Republican Party exhibit unity by the candidates coming together with a pledge to talk about the many serious problems facing our country," Carson said before Super Tuesday results began to roll in. As Wednesday evening, not one of the candidates has said they would come to the party. You almost start to feel sorry for the slow-talking surgeon. Almost.

Where Carson's backers will go next poses a bit of a challenge. Some have said that a vote for Carson is a vote for Trump, but this is only on a meta level. Carson's few supporters are likely to gravitate towards the similarly mild-mannered Ohio governor and former Lehman Brothers managing director John Kasich before voting for Trump. Rubio could also pick off a few of Carson's flock incidentally, but it is unlikely that the acquisition of the Carson faction would have any noticeable impact on his ability to build a viable majority coalition of support at the Republican National Convention.

Things should hopefully become more clear after Carson's speech to CPAC on Friday. Until then, here's a full video of him at last year's gathering, where his remarks first sparked speculation that he'd be running for office.