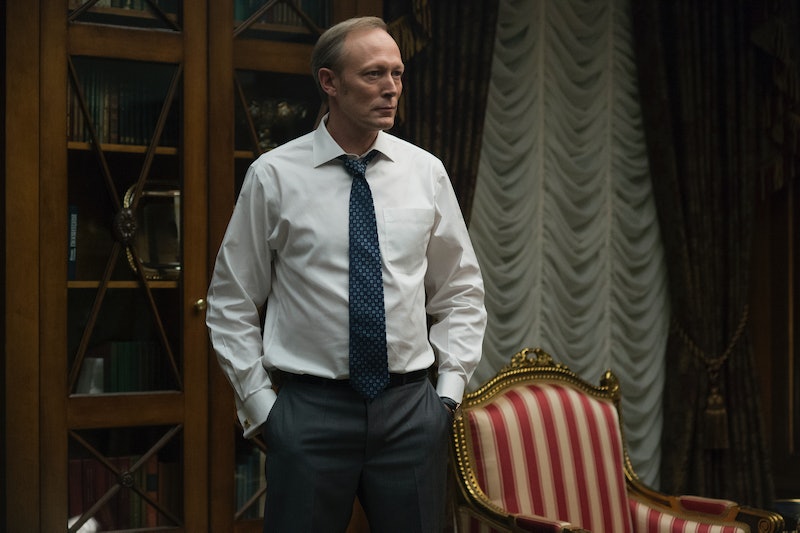 Netflix's House of Cards Season 4 drops Friday and it's going to be a wild ride, because President Frank Underwood (Kevin Spacey) is facing an election year — hey, just like what's happening in real life. Funny how that worked out. It's not the only time the dark political drama has has appeared to mirror reality in its own fictional way, like it did with fictional Russian President Viktor Petrov in Season 4. Many media outlets have speculated that Petrov in House of Cards is based on Vladimir Putin, the real President of Russia, but it's not quite that simple — just like most things with this Netflix staple. Danish actor Lars Mikkelsen told Vulture his take on it: "We didn’t want to make an imitation [to Putin]. He’s an opponent to Frank, but it’s not such an imitation; it shouldn’t be. But there are certain similarities...At first people will see the comparison, but this guy’s much more suave and 'man of the world' compared to Putin."

We [at the Kremlin] have not watched it… and we have not heard that [Putin's] image was used.

House of Cards exec producer and showrunner Beau Willimon told The Daily Beast that foremost, he wanted the show to have a realistic reflection of the relationship between the United States and Russia. But that particular storyline was actually developed before recent issues with Russia. "Sure, you could find things in Victor Petrov that you could say are similar to Putin, but I think there are also elements in him that are different," he said. "Petrov is taller."

While Petrov isn't riding around shirtless on a horse like Putin famously did, the fictional man has a strong resemblance to the real man and they both have the same initials: V.P. House of Cards also used Petrov to make a statement about Putin last season with the members of the Russian band Pussy Riot. If you remember from Season 3, Pussy Riot band members Nadia Tolokonnikova and Masha Alyokhina made a memorable cameo, where they confront Petrov about silencing free speech in Russia. According to the Daily Beast, Tolokonnikova and Alyokhina are big fans of House of Cards and spoke to Willimon and the show's writers about their experiences in Russia — and no doubt with Putin. In 2012, members of Pussy Riot were arrested for protesting Putin's anti-gay regime.

Tolokonnikova and Alyokhina were also aware of the Petrov and Putin comparisons, but according to an interview with AFP, Tolokonnikova's thoughts echoed Willimon — Petrov is taller. "And his face is too withered," she told the news service. "This is an early Putin, before Botox." Alyokhina chimed in and said Petrov doesn't quite capture the former KGB agent in Putin and there are distinct differences between the two men. "In the film Petrov is more of a little tsar," she said. "He is too jolly for Putin, of course. Actually this is some sort of hybrid between [Former Russian President Boris] Yeltsin and Putin."

So while Petrov and Putin are two different Russian presidents, the lines between them occasionally blur on House of Cards. And they may continue to, if Petrov returns to face off with Frank Underwood in Season 4. If there's anything fans know about Frank, he'll be game for a rematch.