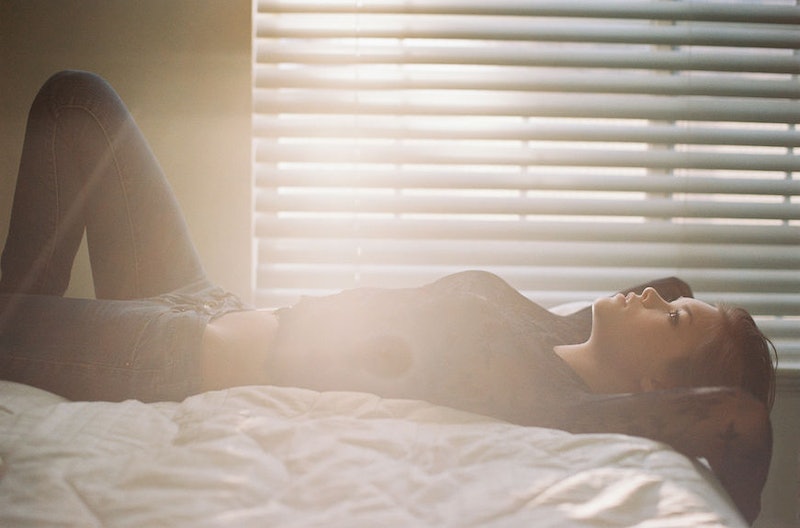 By now, you've hopefully learned not to believe all the silly myths about how your body rots away if you're not having sex regularly. Just for a quick refresher: You don't magically become a virgin again after a certain period of time without sex, and your vagina doesn't turn into a monster that devours you in the middle of the night. However, that doesn't mean that absolutely nothing changes when you give up sex for a while.

Dr. Philip B. Luloff, assistant clinical professor of psychiatry at Mount Sinai Medical Center, told WebMD that there are some surprising side effects that can come along with sexual abstinence. According to Luloff, people in a dry spell who want to have sex but are unable to do so may walk around with intense feelings of frustration, and they can end up "creating a vicious cycle of discontent." Researchers and doctors at Georgia State University published a study in 2001 with similar findings. Apparently, those stuck in phases of involuntarily celibacy were more likely to be angry and lonely.

But these are more of the extreme cases, and if you're just going through a brief period of not getting laid often enough, I don't think you need to worry about falling into any kind of vicious cycle. There are a few more common side effects that are worth thinking about, but they aren't so serious. And like your cold streak, they're not permanent. It's also worth noting that these side effects are tied to having your usual levels of sexual activity drop; if you haven't become sexually active yet, these side effects don'tapply.

Here are seven things that happen when you go through a dry spell.

1. You're More Likely To Get Sick

Sex doesn't only make your brain happy; it also keeps your immune system healthy. At Wilkes-Barre University in Pennsylvania, researchers found that people who had sex just once or twice a week saw a 30 percent increase in immunoglobulin A (IgA), which helps the body fight off viruses. Those who either rarely or didn't ever have sex didn't see this benefit.

When you stop sexing, you don't produce as much IgA. Your immune system loses some of the strength it once had, and you're more susceptible to catching anything from a common cold to a stomach flu.

2. If You're In A Relationship, You May Start To Have Doubts About Your Partner

As Sex and the City's Samantha Jones once said, what's going on in the bedroom is usually a pretty good barometer for what's happening in the relationship. So if you're not getting laid, you may soon start to mull over all the things that aren't good between you and your SO.

Psychologist and author of Saving Your Marriage Before It Starts Les Parrott told Prevention that sex is a necessary expression of intimacy for a couple. Pretty obvius. But Parrott also noted that not having sex can "engender guilt, and decrease levels of oxytocin and other bonding hormones." Ouch.

Finally, the longer you go without rolling around in between the sheets, the more likely you are to feel nervous about whether your partner is seeking gratification elsewhere. And we know paranoia never ends well.

3. Your Self-Esteem May Drop

We're used to hearing about how low self-esteem affects a woman's desire to have sex, but there's the other side to the coin as well. If you're not getting your fill, you could end up less self-confident — for the time being, that is.

When you get rejected by someone, whether emotionally or sexually, your mind responds the same way as if you were physically harmed. There are two parts of the brain that are associated with physical pain — the emotional affective component and the sensory somatic component. The former is activated when you're turned down by someone, while the latter isn't — which means you get all the mental damage of being physically hurt without the actual injury. Ow.

In other words, you get emotionally hurt, and you don't feel so great about yourself. So if you're in a relationship and things haven't been heating up lately, or you're dating and you haven't gotten lucky in a while, you could be facing a (brief!) drop in self-esteem. But don't worry too much — this drop rights itself as soon as your life gets back to normal.

In 2010, the American Journal of Cardiology published a study claiming that men who have sex a couple times each week were less likely to be diagnosed with heart disease than those were only getting laid once a month. Dr. E. Dean Nukta, medical director of interventional cardiology at Fairview Hospital, told Everyday Health this is true because sex is a useful aerobic exercise that gives your heart the proper workout it needs — and that this fact doesn't apply only to men.

Of course, a a dry spell is not a guarantee that your likelihood for heart disease will rise, but it's important you keep an eye on your cardiovascular health if you're not knockin' boots on the regular.

When you're suffering a dry spell, your vag doesn't have the chance to lube up on the regular, and when the occasion finally arises for it to perform, things might not pan out as easily as they used to. Dr. Tracy Hicks, an OBGYN at St. Francis Hospital, told Bustle that it usually takes a while for you to get wet when you start having sex again, so don't be surprised if you have to stock up on the lube.

This difficulty getting aroused right away won't stick around forever, though. The body's sexual responses are constantly changing as you move from one part of your life to the next, so don't make the mistake of thinking you're stuck in this phase forever.

6. You May Not Feel As Creative

Orgasms release a cocktail of happy chemicals in our brain: dopamine makes you more motivated and assertive; opioids offer feelings of transcendence; and oxytocin makes you more trusting of people around you. Many report that the combination of all these hormones from sex have made them feel more creative and imaginative in both their career and personal lives.

7. Things May Get Less Complicated In Your Social Life

It's not all drawbacks, though. Think of all the times in your friend group when things got all tangled up just because two people started having sex. It happens all the time. Sex complicates relationships of any kind, not just romantic ones. So when sex is out of the equation, you may find that it's much easier to navigate friendships and different interactions clearly. You might even become the clear-headed friend everyone trusts for advice (which may or may not be a good thing, come to think of it).

This might actually be a good reason to give up sex for a while. Once you get past the initial tough stage, the lack of sexual frustration may pave the way for more mature, less messy relationships. For a little while, anyway.