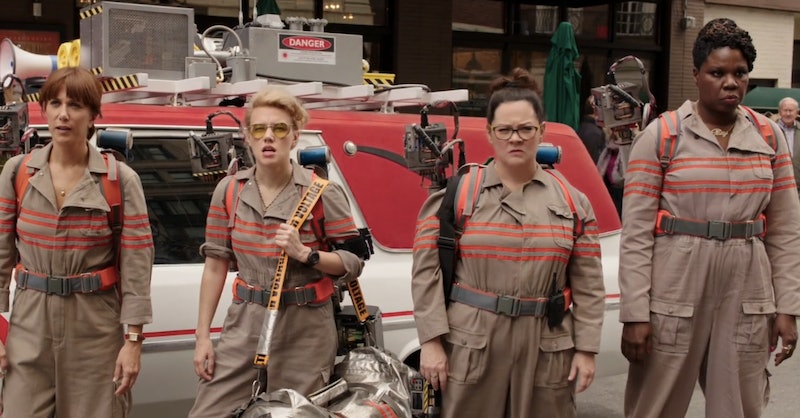 I've always thought that the Ghostbusters reboot sounded like a great idea, and the new trailer released Thursday only confirms how amazing the movie is going to be. Despite sexist criticism about the Ghostbusters being women, the choice to cast four kick-ass female comedians in the lead ghostbusting roles already looks like the absolute right move, particularly as the trailer still finds time to focus on the beautiful Chris Hemsworth. Could it be that the new Ghostbusters movie has everything we could ever want from a blockbuster? To answer this question, I'm going to have to make GIFs of the 2016 Ghostbusters trailer. It has to be done.

With the comedic talents of Kristen Wiig, Melissa McCarthy, Leslie Jones, and Kate McKinnon, it's no surprise that the Ghostbusters trailer is filled with awesome chemistry. The special effects look just as awesome, giving us a glimpse of the new ghosts and ghouls created especially for the iconic movie. The original movies are '80s classics, much loved, and a tough act to follow. However, the new Ghostbusters trailer doesn't disappoint. Here are the best moments from the new Ghostbusters movie in GIF form, so you can enjoy them on a loop forever and ever (especially that Chris Hemsworth one).

The Tribeca firehouse, which is the home of the Ghostbusters. It's awesome to see this classic location utilized in the new trailer.

No one could mistake the classic Ghostbusters symbol, spray painted on a wall in the trailer.

3. The Costume Department Did Good

All throughout the trailer, the characters can be seen wearing quirky outfits, each unique to them. They look suitably retro and amazing.

4. Kristen Wiig Is The Serious One

Standing in a lecture theater, and doing an awkward finger point, Kristen Wiig's character looks serious and uptight. Just look at her suit!

5. Kate McKinnon's Goggles Are On Fleek

Just look at that wink. Maybe it's time to trade your Ray Bans in for a pair of these?

6. Melissa McCarthy Is The Mad Scientist

McCarthy has the skills, and the helmet, to pull this role off.

7. Leslie Jones Is The Exorcist

Screaming "The power of Christ compels you!," Jones slaps McCarthy round the face, causing a demon to fly out of her. Impressive.

8. The Ghost Came Out Of The Sink Hole, FYI

If there was ever a convincing argument to clean out your sink, this is it.

Whatever was down the plug hole was nasty.

I always thought Melissa McCarthy was capable of a full-head spin.

The Ghostbusters need their classic car, of course.

12. There Are Plenty Of Ghosts To Fight

Kristen Wiig gets slimed real good, while Melissa McCarthy stands by with a camera.

Of course he is.

16. The Outfits Are Amazing

These four ladies are ready for anything.

17. The Friendship Is Real

The chemistry between the four leads is evident in the trailer, and is sure to produce a lot of laughs.

I have total confidence in the new Ghostbusters.

Opening the door like only Chris Hemsworth can. He may only be in the trailer for a moment, but I'm excited to see more of him in the movie. A lot more.

Watch the full trailer now, and get as excited as I am about the new Ghostbusters movie. Seriously, it looks incredible.

More like this
Chris Hemsworth Joked That Baring His Butt In ‘Thor: Love And Thunder’ Was A “Dream”
By Brad Witter
Kimberly J. Brown & Daniel Kountz Looked Back On Their ‘Halloweentown’ Romance
By Stephanie Topacio Long
All The Sneaky Lindsay Lohan Movie Easter Eggs In Her New Ad, Explained
By Stephanie Topacio Long
The 'Hocus Pocus' Sequel Finally Has A Release Date & It Makes Total Sense
By Shannon Barbour and Radhika Menon
Get Even More From Bustle — Sign Up For The Newsletter