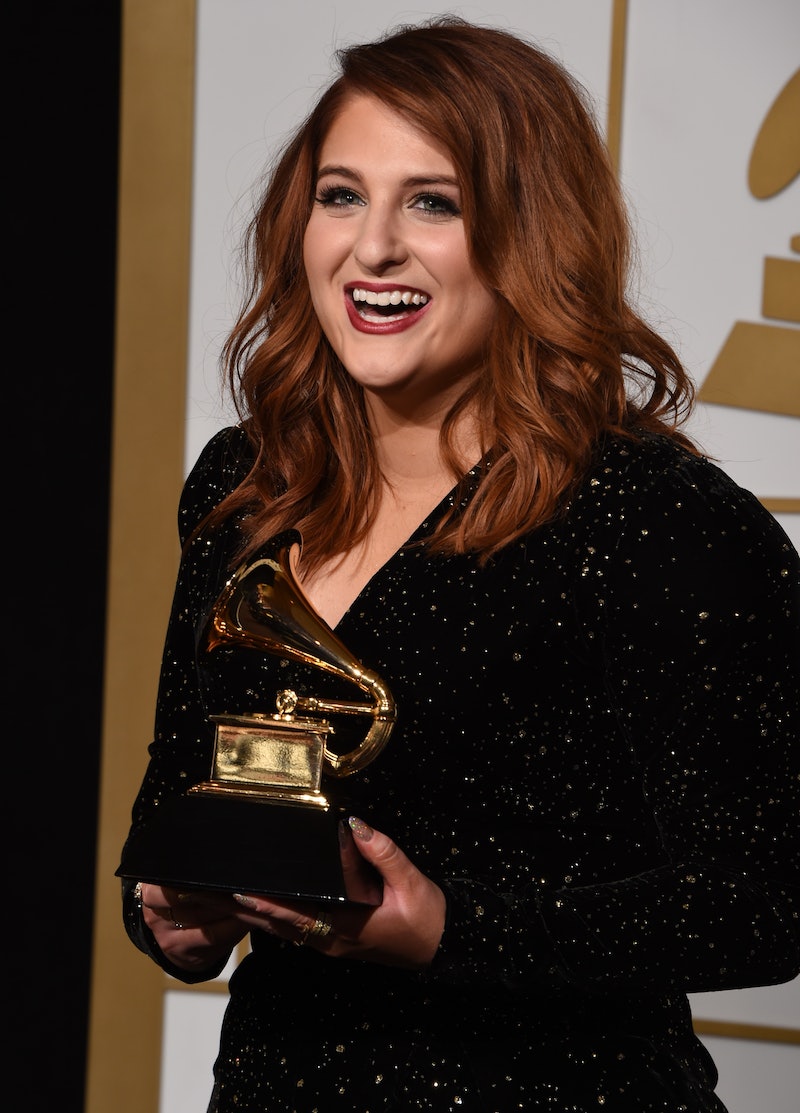 Prepare to have the best weekend ever, Megatronz: Meghan Trainor's new single, "No," premieres Friday. And if you can't imagine having to wait until Friday morning to hear the tune, you're in luck: "No" actually hits iTunes at midnight tonight. At that time, Trainor's new album, Thank You , will also be available for pre-order. See what I mean? Best weekend ever! So, what can we expect to hear from the 22-year-old star's upcoming tune? Trainor told Fuse at the beginning of February that "No" is "a big anthem for ladies about telling a dude, 'Nah, I’m good — I'm out here on my own, and I'm good with it.'" She elaborated: "The scene is me in a club, and the dude comes up to me and I go, 'No no no. I don't need your hands all over me. I'm good. I'm gonna dance on my own with my girls.'" The Meghan Trainor "No" lyrics we've seen so far definitely support this description.

On Feb. 22, Trainor tweeted, "My name is #NO my sign is #NO my number is NO," which sounds to me like an empowering (not to mention hilarious) way to shut down unwanted advances. Then, on Wednesday, Trainor tweeted more possible lyrics: "Untouchable, untouchable." Again, she seems to be sending this guy a clear message: "I'm not interested; don't touch me. Now, back away."

On Monday, Trainor gave fans a short preview of "No" on Snapchat:

During her aforementioned Fuse interview, Trainor described "No" as having an "urban beat," which is, obviously, not heard in this clip. If I had to guess, I'd say that what we're hearing is probably the song's introduction, and the beat will drop in later. Rumor has it Trainor co-wrote "No" with Jacob Kasher, who's recently co-penned big songs like One Direction's "Perfect," Maroon 5's "Sugar," and Charlie Puth's "We Don't Talk Anymore." The track was produced by Ricky Reed, who's recently worked with big acts like Fifth Harmony, Jason Derulo, and Jessie J. So, even though we haven't heard "No" in full yet, I think it's safe to say that it has tons of hit potential.

Thus far, the reaction to "No" from celebrities and critics alike has been overwhelmingly positive. For example, Perez Hilton predicts "No" is going to go No. 1:

Frankie Grande has declared that "No" is "so f***ing good":

And Gerrick Kennedy, a music writer for the Los Angeles Times, thinks "No" is "F-I-R-E":

Needless to say, Trainor's fans are pretty pumped about the song, too. Perhaps a little... too pumped?

Nah, I take it back; this is the proper level of excitement. Hopefully, "No" will live up to the hype! We'll find out soon enough.

More like this
Adele’s All-Female Lineup Includes Kacey Musgraves, Mahalia, & Self Esteem
By Shahed Ezaydi
Britney Spears’ Honeymoon Plans Include Watching This Movie With Her Husband
By Grace Wehniainen
Rihanna Is America's Youngest Self-Made Woman Billionaire, According To 'Forbes'
By Hugh McIntyre
Adele Says It Would Be “Wonderful” To Have Kids With Boyfriend Rich Paul
By Jake Viswanath
Get Even More From Bustle — Sign Up For The Newsletter