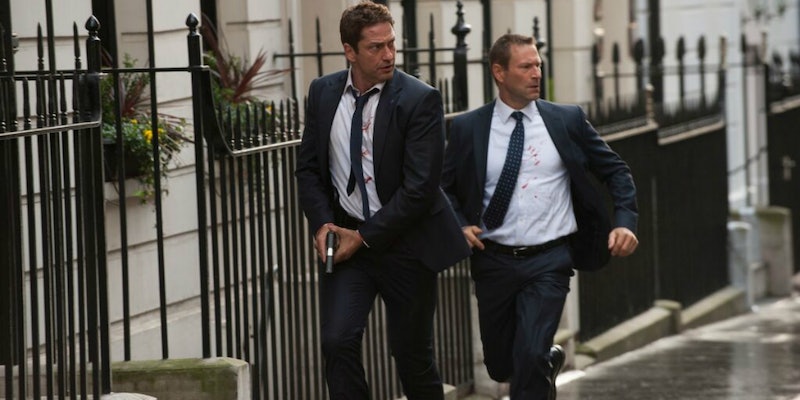 Action movies often get the reputation of being predictable: the good guy lives, the bad guy dies, and many bullets are fired in the process. 2013's Olympus Has Fallen was no exception to this, featuring a lot of drama and a lot of bloodshed but an ultimately happy ending. Its sequel London Has Fallen appears to have a similar formula, which begs the question: does it also have the same ending? If you're wondering how London Has Fallen ends, allow me to be of assistance. The movie and its conclusion have a lot of the elements you'd expect from an action thriller, but with a few interesting twists. Spoilers ahead!

If you've seen Olympus Has Fallen, you already know that Gerard Butler plays a Secret Service agent named Mike Banner who saves the President (played by Aaron Eckhart) from a bunch of bad guys. And guess what? The same thing happens in London Has Fallen, but on a larger scale. President Asher is lured — along with many other world leaders — to Britain in what turns out to be a setup for a major terrorist attack. It's now on Banner to save the President's life at any cost, even though he himself has a pregnant wife waiting for him back in the States. A ton of gunfire later, here's how things turn out:

I know, shocking. Banner saves the President from a public execution in a terrorist-filled building and then forges an escape by blowing up the building while they're still in it. It seems like an illogical move, but just as the structure is being consumed by a giant fireball, Banner dives with Asher into a protective bunker-type shaft. Lo and behold, both are discovered shortly thereafter lying at the bottom of the shaft, bruised and battered but otherwise fine.

Freeman's last lines as Vice President Alan Trumbull are in a Skype conversation with Aamir Barkawi, the criminal mastermind who orchestrated the devastating attack. Barkawi tells Trumbull that this is the beginning of a war, and the Vice President responds by dropping a bomb on Barkawi's exact location. You don't mess with Morgan Freeman, man.

Back in the States, Mike Banner is reunited with his wife in their sunny suburban home, where he lovingly gazes at a tiny newborn. It's super sweet.

The Story Is Left Open

At the beginning of the movie, Banner had been drafting a letter of resignation to the President's office. The end of the film finds him once again in front of his laptop, staring at the draft of the letter. He looks at it meaningfully, puts his hand on the mouse, and clicks delete. The significance of this, of course, is that Banner is staying on as the President's right-hand man, creating the possibility for more adventures (AKA another sequel).

So now that you know the ending of London Has Fallen, you might think that there's no need to see it. But let's be honest — you don't typically go to see action movies for the narrative, anyway. Plus, there's still the question of how the series as a whole will end. Will there be another sequel? There are still plenty cities left that haven't yet "fallen"... but if they do, you can be sure that Mike Banner will be there to pick them back up.