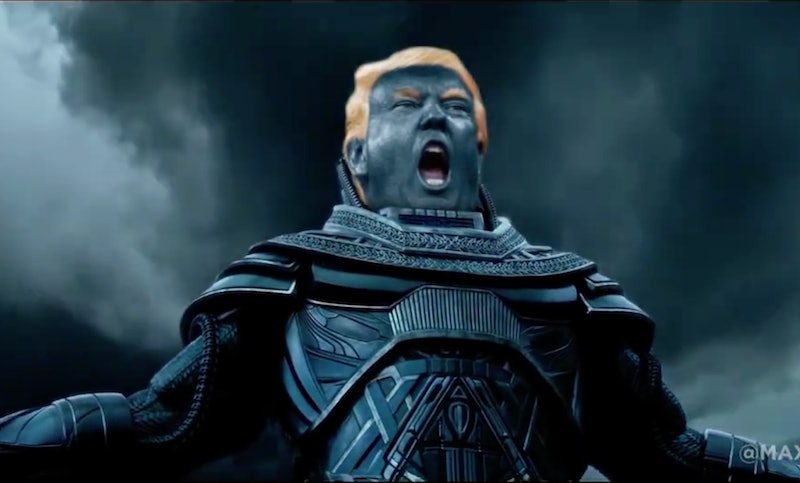 The X-Men have fought some nasty bad guys in their time, but soon the mutant superhero squad will face the ultimate foe: Donald Drumpf…. ahem, I mean, Trump. This video mashup of X-Men: Apocalypse and Donald Trump hilariously skewers the 2016 election cycle thus far and proves something that many of us already suspected: The prospect of Donald Trump becoming leader of the free world is legitimately scarier than an ancient, immortal supervillain coming to life and raining destruction upon the Earth. I mean, Oscar Isaac's Apocalypse seems like he’ll be an enjoyable baddie for the superhero franchise. But replace him with Donald Trump? Suddenly X-Men becomes a horror movie.

This inspired parody was created by Max Goodrich. As in the original X-Men: Apocalypse trailer, the video opens with Jean Grey (Sophie Turner) awakening from a nightmare, crying, “I saw the end of the world.” Though Charles Xavier assures her it was only a dream, we soon see that it’s worse than anyone imagined: Trump announces that he’s running for president. Dun dun DUN. Chaos ensues as the X-Men battle to save the world from the unthinkable.

Besides being awesome in itself, this video also gets kudos for bringing to my attention the essential fact that Donald Trump has a long history with the WWE. That’s right, World Wrestling Entertainment. In 2007, he actually body slammed WWE Chairman Vince McMahon on TV. McMahon would later go on to describe Trump as “a ‘WrestleMania’ institution.” How did I not know about this until just now? I feel like it explains so much.

Back in X-Men-land, it’s only a short leap from this:

Can the X-Men defeat him? He’s seemed bizarrely impervious to controversy thus far. Maybe that’s his superpower? Being able to say whatever he wants, no matter how offensive or wrong, and still stay ahead in the race? Heaven help us.

More like this
How To Protect Your Digital Privacy If You Need An Abortion Post-Roe
By Kaitlyn Wylde
Police Shove 'Full House' Star Jodie Sweetin At An Abortion Rights Protest
By Radhika Menon
Here’s How Lizzo Is Supporting Abortion Rights After The Roe v. Wade Reversal
By Brad Witter
Michelle Obama & Taylor Swift React To The Supreme Court Overturning Roe v. Wade
By K.W. Colyard
Get Even More From Bustle — Sign Up For The Newsletter