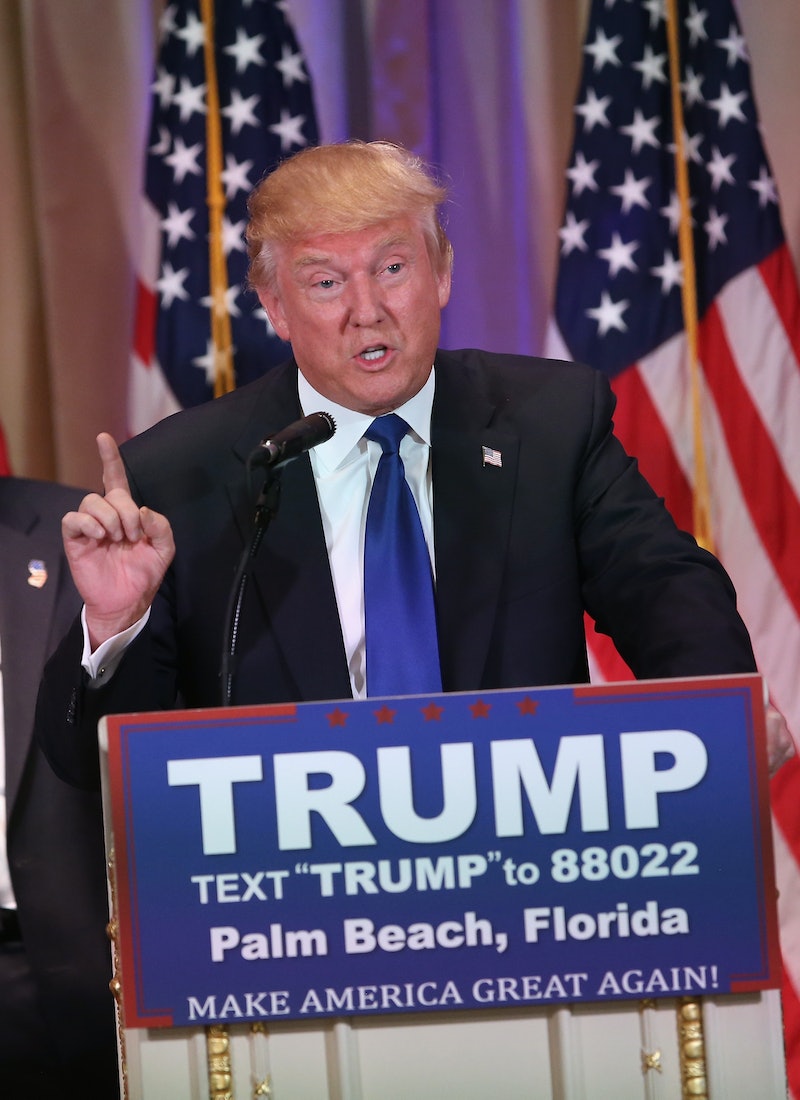 After being called a fraud by former Massachusetts governor Mitt Romney and "Donald Drumpf" by comedian John Oliver — oh, and failing at first to denounce the KKK's support — the Donald Trump campaign is now being hit with yet another controversy. This whole 2016 election season is starting to seem like an episode of Scandal, with every move Trump makes calling for major damage control. The latest issue has people wondering, did Donald Trump's campaign Photoshop white models to appear black? Rawstory.com was the first to report it. Before this happened, I honestly thought there wasn't anything the GOP candidate could do that would shock me anymore, but he has succeeded. I am shocked.

So what happened here, exactly? Trump's campaign apparel is sourced from a brand called JCG Apparel. Bustle has reached out to JCG for comment on the alleged photoshopping and to ask whether they only use white models but has not yet heard back. Trump sells these shirts on his website DonaldJTrump.com, and his campaign logo is imprinted on top of the v-neck tee shirt, among other items. What has people talking, however, is that it appears the original photo of the model on JCG Apparel's website has been altered to make the skin of the fair-skinned model look darker.

Political activist Eric Ming was first to make this accusation after tweeting a photo of a side-by-side comparison of the original image, and the one on the Trump campaign's site online store.

So was the picture actually Photoshopped? Bustle has reached out to Donald Trump's campaign for comment but has not yet heard back.

BuzzFeed has pointed out some clues that may prove it's actually the same photo, including similar neck spots and on the models, as well as similar spots of shadows in the two photos.

I wonder how Trump is going to talk his way out of this one.

More like this
42 Black Owned Fashion & Beauty Brands To Support Today & Always
By Mekita Rivas, Shea Simmons, Kui Mwai and Dominique Norman
"Transparent Eyeliner" Is The Perfect Summer Look For Makeup Minimalists
By Olivia Rose Ferreiro
TikTok's “Clean Girl Aesthetic” Isn't As Inclusive As You Think
By Tomi Otekunrin
23 Times Meghan Markle Dressed Just Like Princess Diana
By Bustle UK
Get Even More From Bustle — Sign Up For The Newsletter