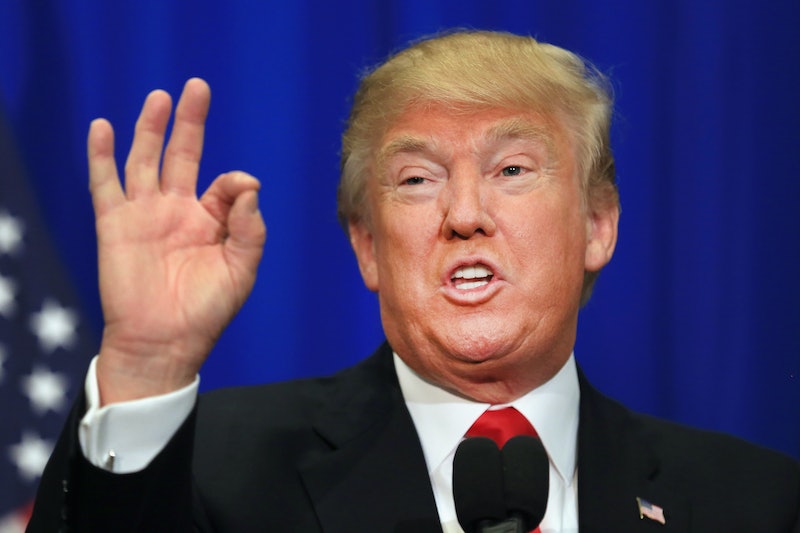 On Sunday, late-night comedian John Oliver used the better part of his weekly satirical news show, Last Week Tonight, to take down Donald Trump. Oliver debunked several myths about the controversial candidate for president and disproved several of his statements before calling on anti-Trumpers to rally together behind a new brand: Donald Drumpf. The idea, based on a former last name used by the Trump family, seems to have caught on, as hilarious Drumpf memes have taken the Internet by storm.

As Oliver described during Sunday night's episode of Last Week Tonight, the name "Trump" resembles the "sound of a mouthy servant being slapped across the face with a wad of cash," whereas "Drumpf" seems much less flattering. The Drumpf campaign that Oliver has set off is meant to weaken the power of Trump's rich and successful brand by painting it as somewhat of a facade. Although #MakeDonaldDrumpfAgain probably has no chance of actually ruining the billionaire's brand, it has inspired social media users to speak out about the candidate ahead of the primary elections that he needs to win in order to nab the GOP's nomination. Despite Oliver's valiant efforts, Trump won big on Super Tuesday... but with many primaries left to occur, there's still time to make Donald Drumpf again.

Despite Trump's success on Super Tuesday, these memes are the real winners, let's be honest. They're making Donald Drumpf again, one tweet at a time. Remember, get your Drumpf hats markup-free!