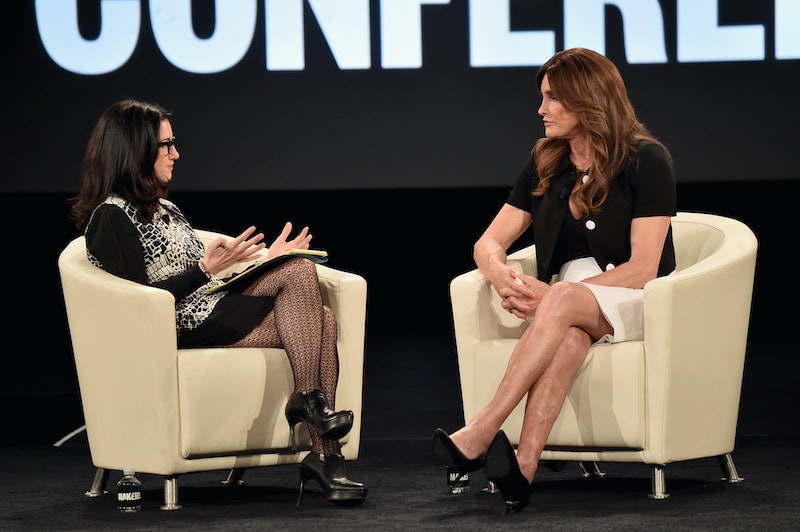 Though she has tried to position herself as a leader in the trans community, Caitlyn Jenner's support for Ted Cruz shows she remains terrifyingly clueless on the push for transgender rights. This week, the reality TV personality announced who she would support Cruz for President in 2016. Let me say that again: Caitlyn Jenner supports virulently transphobic, homophobic Senator Ted Cruz in the 2016 Presidential Election.

In an interview with The Advocate, Jenner (a long-time Republican) discussed her thoughts on current slate of contenders for the GOP Presidential nominee, saying, "I like Ted Cruz ... I think he’s very conservative and a great constitutionalist and a very articulate man."

She went on to explain her vision of her involvement in Cruz's potential future administration:

"And I have all my girls on a trans issues board to advise him on making decisions when it comes to trans issues," she said. "Isn’t that a good idea? ... Trans ambassador to the President of the United States, so we can say, ‘Ted, love what you’re doing but here’s what’s going on.'”

Of course, Ms. Jenner is no stranger to throwing the rest of the trans community under the bus. In her interview with TIME last year, she disparaged trans women who do not have a cisgender-normative appearance (do not "pass" as cisgender) as looking like "men in dresses." She later apologized for the remark, but only after an enormous uproar from the trans community. She's also made comments implying she does not support gay marriage, and has decried the trans community as engaging in "outrage culture," "political correctness," and lacking a sense of humor.

Cruz has referred to supporting the rights of transgender students as "lunacy" and "letting boys shower with little girls." When discussing trans issues, he consistently misgenders every single trans person he discusses, and continues to promote the completely debunked notion that transgender bathroom protections are exploited by sexual predators. He attempted to claim that the [conservative, pro-life] terrorist who murdered several people at a Planned Parenthood Clinic was a "leftist transgendered [sic] activist". He has also repeatedly argued against discrimination protections for the LGBTQ community.

It's not just trans people that Cruz attacks, of course. Senator Cruz has also repeated vowed to make repealing federal marriage equality a centerpiece of his presidency. He has appeared at a conference hosted by a man who advocated for the "mass extermination" of gay people. He's attacked the ability of women to receive affordable healthcare by pushing for defunding of Planned Parenthood.

Oh, and that Republican Party that Ms Jenner so often touts her proud membership in? It passed a resolution encouraging its members to push legislation that would force trans people to choose between arrest and assault when using a public restroom as a matter of "privacy" for cisgender people, saying:

"Public schools that allow any students to use the restrooms, locker rooms, or other facilities designated for the exclusive use of the other sex infringes on the rights of privacy and conscience of other students."

The only conclusion that can be reached from Jenner's continued support of Cruz and the GOP is that her concern for the rights, protections, and safety of trans people only extends to the point where it bumps into her priorities as a wealthy white person. To Jenner, her fiscal priorities as a Republican outweigh the very real danger that the current climate of her party represents for the entirety of the LGBTQ community, trans people specifically, and women as a whole (especially poor women of color). She has no business representing us on a political level, and the idea of her as the "trans ambassador" to a GOP president is physically revolting.

The only conclusion that can be reached from Jenner's continued support of Cruz and the GOP is that her concern for the rights, protections, and safety of trans people only extends to the point where it bumps into her priorities as a wealthy white person.

The rest of the trans community has frequently been critical of Jenner's behavior. Trans writer Brynn Tannehill penned an open letter to Jenner after one of her foot-in-mouth episodes, and succinctly sums up the fears trans people have about Jenner's loyalty to our cause:

"You won't be able to understand where most queer people are coming from until you understand our absolute dread of conservative, Republican politicians. Three of the four top Republican Presidential candidates have already vilified us, and promised to roll back protections for transgender Americans. Our lives are being put at daily risk as they label us perverts, abominations, predators, and rapists. As bad as things are for transgender people, they could get much, much, worse. Your support of the people who would do these things make it hard for us to trust you."

Tannehill is far from Ms Jenner's only critic — though many of us also lay some of the blame for the damage she is able to cause at the feet of the media who obsess over her — and many trans people have called for de-centering her from the moment she came out. While she has certainly faced a challenging situation as she transitioned in the public eye, the community has done its best to both defend her from those would attack the legitimacy of her identity and to give her a little space to make mistakes. But, her continued support of the Republican party and its clear interest in actively oppressing and endangering trans people, Caitlyn Jenner has gone beyond the realm of gaffes, slips, and correctable ignorance. She has demonstrated that she is completely tone-deaf on the concerns of the trans people who are not millionaire former Olympic gold medalists. It's time for the trans community to wash their hands of her, and to push the media to do so as well.

Much of Jenner's media power, of course, stems from her connection with the reality TV circus that surrounds the Kardashian clan. Her coming-out interview with Diane Sawyer garnered huge TV ratings. She was quick to capitalize on the media fascination and produced a reality TV show of her own focusing on her life as a trans woman. While the show seemed to gain a following with cisgender people, much like Caitlyn herself, trans people were lukewarm at best. Casey Plett wrote for The New York Times:

"Praising 'I Am Cait' as excellent TV because it puts trans people in a warm light is like giving five stars to a pizza when you’re starving: Just because it was necessary doesn’t mean it was good. ... 'I Am Cait' never seemed interested in what people who have transitioned might want to watch. ... Surely a 'transgender tipping point' could yield a show that considers an adult trans audience. I want a show that could speak to me and all the other trans people I know. I want these shows to give us something new."

Angelica Ross, who appeared on the show's first season wrote extensively about the numerous concerns she had after the series aired, particularly criticizing the ways Jenner's white and wealthy privilege negatively affected both the way she approached working with and for the trans community, as well as the portrayals of trans women of color on the show. She writes:

"We have enough individuals and organizations offering bandaids to a community that has already lost too much blood. As I type this response there are a total of 19 trans women who have been murdered this year alone. Advocates like Sylvia Rivera, Marsha P. Johnson, Miss Major, Laverne Cox, Janet Mock and countless other trans women of color have been far better "spokespersons" for the trans community, than self-proclaimed Jenner. You want to make real change, Caitlyn? Like Chandi says, start using the word "we." Abandon your conservative respectability politics that have you highlighting trans suicides while casting a judgmental look on the lives of trans women of color who have been killed because you think they somehow asked for it. ...The LGBTQ community is fighting for the freedom and the privilege to be who they are and to love or have sex with whomever they choose on their terms."

The second season of I Am Cait premiered on Sunday night on E!, and the trailer for the first episode appears to be a nod to Jenner's conservative politics coming into conflict the remainder of the trans women in the cast, with Jenny Boylan whacking her with a newspaper for her stubbornness. However, given that the show was shot long before Jenner's comments on Cruz, it's safe to assume that Boylan and the rest of Jenner's road-trip pals had little success in changing Jenner's views.

Therein lies the problem with Jenner and her reality TV empire and her face-on-every-magazine method of "advocating" for our community. We're expected to be interested and entertained by Caitlyn trying to learn lessons about humility, the experiences of other trans people, and life outside her wealthy privileged bubble. But while that might make for entertaining television, it doesn't do the trans community much good. It isn't doing anything for the trans women of color being murdered at alarmingly high rates. It's not doing much to raise trans people out of poverty, or close the wide gap in healthcare we face. It isn't keeping trans youth from ending up homeless or committing suicide when they're rejected by their families. Caitlyn cannot be both learning and a leader. And at a certain point, the continued involvement of highly respected, actual trans leaders folks Jenny Boylan and Kate Bornstein starts to look like a tacit approval of Jenner's acting as the face of our community while undermining our progress on a political level.

Certainly, Caitlyn Jenner has been a huge factor in the surge in visibility of the trans community, and she certainly has made some efforts to raise money for non-profits working to help people on a local level. If she wanted to devote her time to making appearances that raise money for trans causes, then she'd be hero to many local non-profits. But continuing to push herself into public discourse on trans rights while also actively advocating for a political party that misgenders us, believes us to be perverts and predators, and pushes forward legislation that puts us in even greater physical danger is either willful ignorance bordering on absurd or nauseating hypocrisy.

Trans people deserve better than this, and it's high time we demand it. Caitlyn Jenner is not our leader; she is not our representative, and we certainly do not want her for our "ambassador" — to Senator Cruz or anything else. Please stop trying to force her on us.