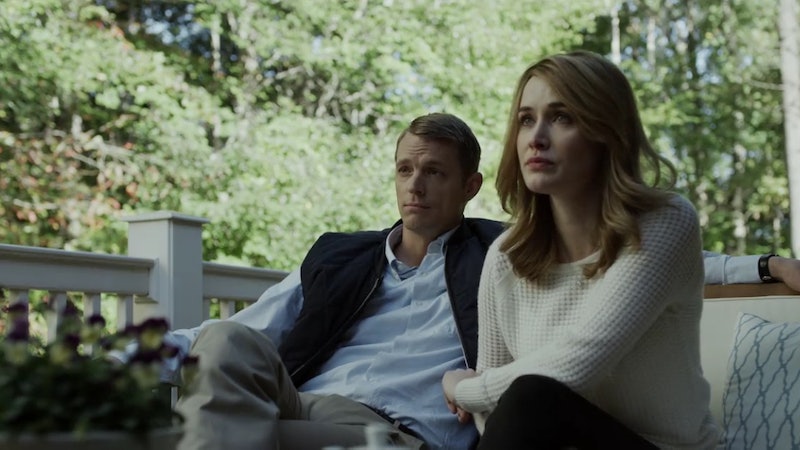 Season 4 of House of Cards introduced a charismatic Republican candidate whose relationship with his wife could challenge the Underwoods. Who is Hannah Conway on House of Cards ? Will and Hannah are poised to be the Underwoods' next victims, and they must have secrets of their own. There are mild spoilers for Season 4 ahead.

Hannah is played by actress Dominique McElligott, who you might know from The Astronaut Wives Club or Hell On Wheels. What do we know about the character? She and Governor Conway are "warm" where Frank and Claire are "cold." They are very publicly in love. She and her husband are big fans of social media and viral videos that make them seem uncommonly accessible — I'm shocked that the media hasn't labeled Conway "the selfie candidate" already. They remind me a little of the Holderness family.

We also find out that Hannah loves the writing of Tom Yates, the novelist from Season 3, and was pushing for him to publish the book he wrote in the last season that would potentially destroy Frank and Claire. The book was intended to promote Frank Underwood's AmericaWorks project and he got very close with the couple while writing. His writing would definitely expose the rumored marital rift, among other things. Hannah and Will promised Yates' a big book launch and a Vanity Fair exclusive just to get this damaging book out to the public.

Is something fishy up with Hannah Conway? Her Vanity Fair friend mentions that they've "come a long way," which could cover any manner of sins. There's probably not a dark past there, but I don't trust anyone on House of Cards to be honest. She's English, which is uncommon for a candidate, but that's not a bad thing and this show is all about playing out political "what ifs" in all shapes and forms. She is definitely strategic, though I'm not quite sure what Will and Hannah are up to yet other than running for President. It also seems like, based on a flashback from 2013, Frank Underwood put this in motion ages ago. He definitely placed the idea of the Presidency into Will Conway's head and I think it was deliberate. Why? We'll have to wait and see, because there's always a reason with Frank Underwood.

More like this
Yes, Billboard Queen Angelyne Really Ran For Governor Of California
By Brad Witter
Kaley Cuoco & Tom Pelphrey Just Made Their First Public Appearance As A Couple
By Hugh McIntyre
Kim Kardashian Remembers Her Last Words To Death Row Victim Brandon Bernard
By Jake Viswanath
Cardi B Explains To David Letterman Why She Uses Her Star Power For Politics
By Jake Viswanath
Get Even More From Bustle — Sign Up For The Newsletter