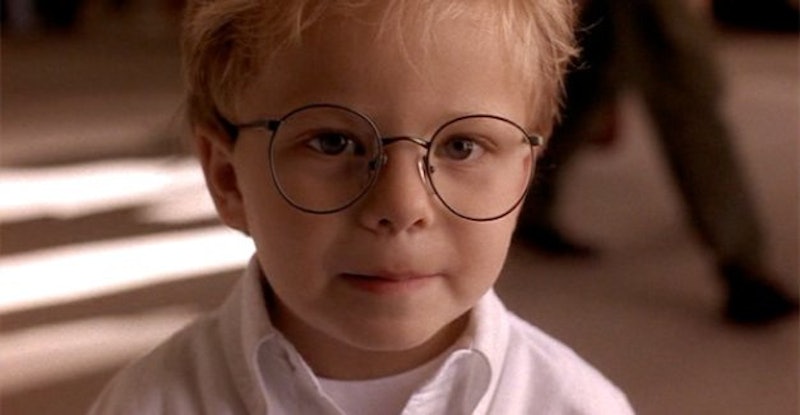 I hope you're ready to wrap up your week by getting your world shaken up a little bit, because I just saw a photo of Jonathan Lipnicki now, and, oh boy, is he not the kid you might remember from some of your favorite childhood movies. In case his name doesn't ring a bell, Lipnicki was that tow-headed bundle of cuteness from films like Jerry Maguire, Stuart Little, and The Little Vampire. He started working in 1996, at just 6 years old, and became one of the most prolific child stars out there for a minute. I know you'll recognize his face, even if his name isn't familiar. I've kind of lost track of him in the interim, and, because I'm naive, I assumed Lipnicki was exactly where I left him: a spiky-haired blond kid charming audiences from behind his oversized frames. But nope. Lipnicki is 25 now, and he's grown up in a way that's very confusing for me and my memory.

I guess... what I'm trying to say is... Jonathan Lipnicki is hot now. There's really no way around it. I feel weird saying it, because ,when last we met, he was a little baby pocket human, but he's very much an adult now, and an attractive one at that. LIFE IS WEIRD YOU GUYS. We live in a world where you can go from this little boy wonder, just being adorable and stealing our hearts:

To this fully grown human just a few years later, baffling our brains and confusing our... well... loins. Seeing anyone shirtless whom I've only known previously as a child actor tends to bamboozle me, but particularly when I had literally no inkling that they'd turn out to be some kind of muscle-bound hunk like this:

I mean come on! The guy has achieved a full Longbottom! Or a Nick Jonas! Whatever phrasing you want to use, we blinked, and Jonathan Lipnicki went from a boy to full-grown, brawny man, and I'll never be able to watch Jerry Maguire the same way again.

More like this
The 'Jurassic Park' Cast, Then & Now
By Arya Roshanian
Everything To Know About 'My Big Fat Greek Wedding 3'
By Grace Wehniainen
Emma Thompson, Lashana Lynch, & Stephen Graham Lead Netflix’s 'Matilda'
By Sophie McEvoy
15 Intriguing Movies On Netflix That Are Based On True Events
By Mary Kate McGrath, Shannon Barbour and Grace Wehniainen
Get Even More From Bustle — Sign Up For The Newsletter