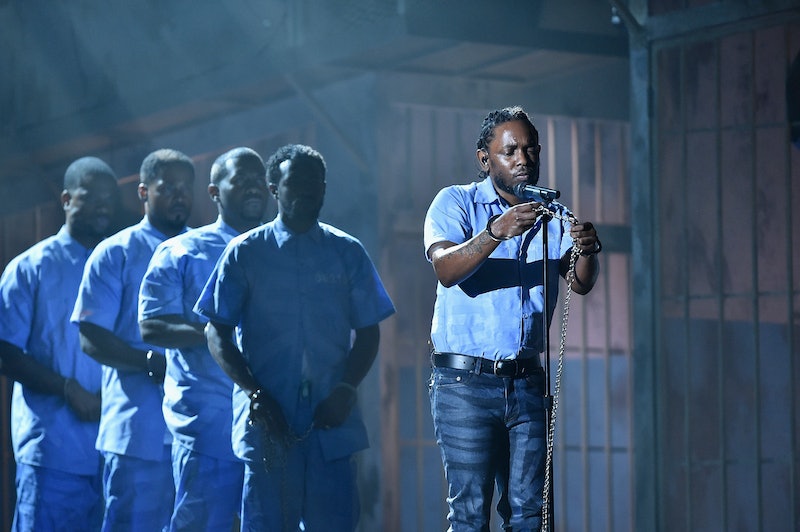 Thursday was made a whole heck of a lot more glorious when Kendrick Lamar decided to drop a new album, untitled unmastered., into our laps. There was no explanation for what the album was for, and the album title is extremely cryptic — just like the song titles are. Because though each song is titled "untitled" along with a number, next to each title there are also dates that have me asking all sorts of questions. So, what do the dates in the song titles on untitled unmastered. mean? With so little information surrounding the release of the album — Lamar has yet to speak about it since its release — it’s hard to tell just what these random dates mean, both to the artist and to the world. But, considering this is Lamar we're talking about, I think these dates are worth reading into — because although the album is only eight tracks long, there is plenty in those eight tracks for fans to sink their teeth into.

And there are some pretty clear themes in the new album that might lead us to our answer. The song lyrics in untitled unmastered. are chock-full of references to both the struggle facing African-Americans in this country, as well as the end of the world. The lyrics are thickly layered with images straight from the bible as well: Lyrics like “Close my eyes pray to god that I live forever/ Dark skies, fire and brimstone some of us sent home,” suggest a very close relationship between some of today's biggest headlines and the end of the world.

Plus, there’s that whole “unmastered” thing in the title, which is a totle double entendre, if you ask me. You could read unmastered as meaning the album has yet to be mastered — a term for the final touches put on a movie or piece of music in post-production — but you could also read unmastered as Lamar refering to himself being unmastered, a man set free from the long history of racism in our country. So it seems only natural to think that those dates must refer to some of the most pivotal moments in 2014, when civil rights were either challenged or thrown into the spotlight.

And, as for the "untitled 07 | 2014 - 2016," there's a chance that that title, too, is referring to the protests and outrage that have taken center stage over the last two years. So while it's not a perfect answer, the connection to important dates in 2014 definitely seems significant enough to be worth mentioning.

Still, these findings don’t necessarily answer the question. It’s also possible that these were the dates that the songs were written, or the dates that Lamar felt particularly inspired to write them in the first place. So, until Lamar officially confirms what the dates mean, there’s no way to know for sure. (Bustle reached out to Lamar's team for comment about what the dates could possibly mean, but has not yet heard back.) But I think, given the content of the album and the nature of the lyrics, that the song titles are definitely there for a reason.