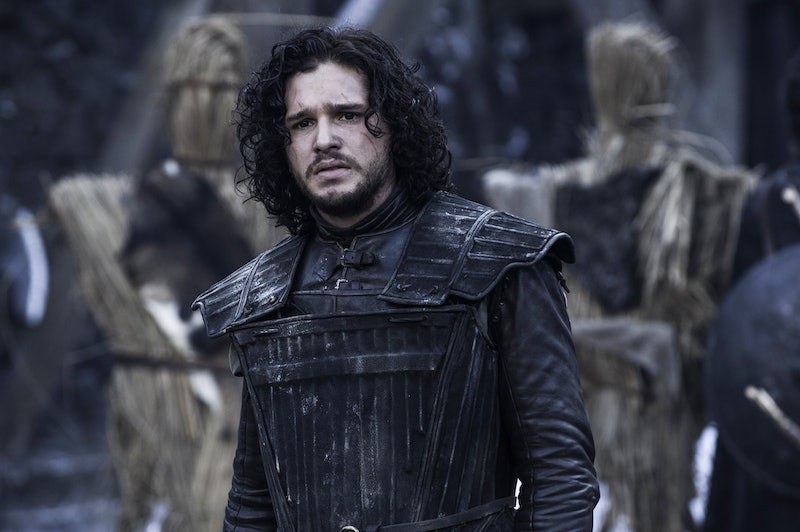 The game is finally over: After ages and ages of fan speculation, it's finally been confirmed that Jon Snow will return to Game of Thrones Season 6. Series star Kit Harington revealed the news in an interview with Time Out London (which was nicely broken down by Watchers On The Wall), and also confirmed that... he'll be playing a corpse? Wait, what? Don't panic, Jon fans: Harington also said: "I know how long I’m a corpse for, but I can’t tell you that!" That means the real question is no longer if Jon Snow will return, it is now how long will Jon Snow be dead?

Of course, Harington is being coy about the details. While he is sticking to his story that the only scenes he has filmed for Season 6 involve Jon being very much dead, it's hard to believe him when his face is splashed all over the first Season 6 poster. Add in the part where HBO won't be sending out screeners to critics this season, and it certainly feels like the powers to be behind Game of Thrones are still trying to keep something important under wraps. Could that something be the resurrection of Jon?

All evidence points to yes, despite Harington insisting he was just there to film scenes of Jon as a corpse. During the long winter between seasons, Harington was spotted on set filming what many have speculated to be The Battle of the Bastards between Jon and Ramsay Bolton. I'm no expert, but I am guessing Jon is going to need to be pretty lively if he wants to go into battle.

When should fans expect Jon to be resurrected? The Battle of the Bastards is likely going to be this season's big penultimate episode, so that means Jon will have to be back on his feet before Episode 9. While I cannot imagine Jon spending too much time in the land of the undead, for the sake of argument let's assume Harington isn't completely fibbing to fans, and Jon will be out of commission for a few episodes.

If Melisandre turns out to be Jon's savior, it could take her a couple of episodes to work her red magic. Giving Harington the benefit of the doubt, I would guess Jon will return to the land of the living no later than Episode 4, but I wouldn't be at all surprised if his resurrection happened much earlier.

Either way, Jon Snow fans can finally breathe a sigh of relief. While the logistics of Jon's return are still murky, even Harington can no longer pretend to know nothing — Jon Snow is coming back, and oh, doesn't it feel good?

More like this
Emilia Clarke Shares More Details About The New 'Game Of Thrones' Series
By Maxine Harrison
Twitter’s Reaction To HBO’s ‘Game Of Thrones’ Jon Snow Spinoff Idea Is Chaotic
By Stephanie Topacio Long
The ‘Love, Victor’ Showrunner Gave Fans Hope For A Possible Spinoff
By Brad Witter
Everything We Know About When To Expect The Rest Of The Upshaws Season 2
By Kadin Burnett
Get Even More From Bustle — Sign Up For The Newsletter