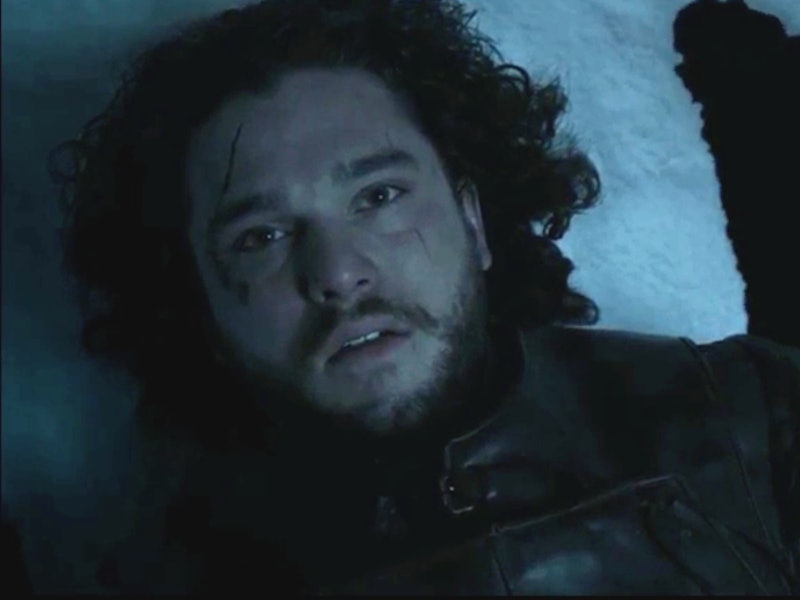 Jon Snow lives! Or does he? Even though the new poster for HBO’s Game Of Thrones features the Lord Commander with blood running down his face, cold-hearted cynics think it’s just a reminder that he’s really most sincerely dead. Needless to say, he definitely looks sad, but dead? There’s no way. So bone up on your Jon Snow resurrection theories, because this poster could mean that Jon Snow will be back from the dead with a little help from the occult. But what magic will resurrect our man of the Night’s Watch after he appeared fatally stabbed in the Season 5 finale?

There are dozens of theories about how Jon Snow could come back from the dead. And even though essentially, we know nothing for sure about Jon Snow’s fate in detail from this poster alone, some theories can be ruled out: It seems unlikely that Jon will be warging into his direwolf, unless Season 6 picks up at the exact moment of Jon Snow’s death, bleeding into a wing-shape in the snow (a crucial part of a theory we’ll get to later).

Kit Harington has been spotted multiple times since his character's alleged death, even shooting scenes on the set. But he’ll probably need a touch of magic (dark or light, but probably dark, since this is Game Of Thrones) to be fully resurrected. Here's how the new poster (which is making fans lose their minds already as expected) could prove the magical resurrection theories.

OK, let’s get this one out of the way, since it’s practically a given at this point for most fans. The most popular, possible and even probable theory about Jon Snow’s resurrection is R + L = J, the theory that asks and could answer the mystery of Jon Snow’s parentage. Jon Snow is thought by many to be the not the bastard son of Ned Stark, who raised him as his own, but the son of Raegar Targaryen and Lyanna Stark, aka a dragon (and a relative of Daenerys Targaryen).

The theory goes that Lyanna, Robert Baratheon’s intended betrothed, was not actually kidnapped by Rhaegar Targaryen, but that she and the dragon were in love and bore a secret son, Jon Snow. Her “kidnapping” lit Robert up and sparked his rebellion, making him vow to destroy all the dragons, and later securing himself as the King Of The Seven Kingdoms. The theory purports that Lyanna’s “mysterious death” was her dying during childbirth and making her brother Eddard promise to raise Jon as his own to protect his identity from angry King Robert.

So if Jon is a dragon, he could be reborn in fire. The Night’s Watch burns their dead so they don’t turn into Wights, but in GOT, dragons cannot burn, as we know from the glorious triumph of the Mother of Dragons, Daenerys.

If Jon Snow is dead, how can we get details that we desperately need about his past?! The blood in his eyes could be a symbolic hint that his bloodline will be revealed — that he has the Blood of the Dragon. This, plus the fact that Jon bled in the shape of a wing in the Season 5 finale, seem like more than a coincidence.

Melisandre invoked the Lord of Light to help Stannis, who she believes is Azor Ahai, fulfill the prophecy. But this theory goes that the Lord of Light is saving that power for another — that’s right — Jon Snow. After the burning, Melisandre flees to the wall, so obviously her proximity to the Night’s Watch could mean that she has plans to turn Jon Snow into her new messiah. Stannis who?

Even though Melisandre herself has admitted that she has never brought someone back from the dead, she has plenty of magic that could help her resurrect Jon. And Thoros of Myr used the magic of the Lord of Light to bring back Berric Donderion from the dead, so it’s definitely possible.

The red blood could be a connection to the Red Woman and her blood magic.

Season 5 was exceptionally cruel, especially the heartless death of Shireen Baratheon, who was sacrificed by Worst Dad Of The Year Stannis Baratheon at the will of the red Priestess Melisandre. It didn’t exactly go as planned though, and Stannis died (or did he?) at the hand of Brienne of Tarth.

So where did sweet Shireen’s spirit go, or was her death in vain? She could have transferred that force to Jon Snow, since in the GOT universe, life must be given to resurrect life.

Jon's bloody eyes could be a symbol of Shireen's blood sacrifice.

Bran Stark is one of the only characters that is known to be magical; off-screen in Season 5, Bran will return in Season 6 with newly learned blood magic after learning from the powerful and mysterious Three-Eyed Raven (who will be played by the legendary Max Von Sydow!) One Bran-related theory is that Jon wargs into his direwolf, Ghost, and Bran can also warg, and uses that connection to bring back Jon from the dead. But it’s also possible that Bran witnesses Jon’s death through his ability to see past, present, and future with the sight, and could bring him back using blood magic.

Bran-related theory is that Jon wargs into his direwolf, Ghost, and Bran can also warg, and uses that connection to bring back Jon from the dead. But it’s also possible that Bran witnesses Jon’s death through his ability to see past, present, and future with the sight, and could bring him back using blood magic.

Bran has the greensight, and Jon Snow is bleeding out of his eyes. And Bran has the power of blood magic.

Basically, the clues are in the blood. Who is Jon Snow after all?!