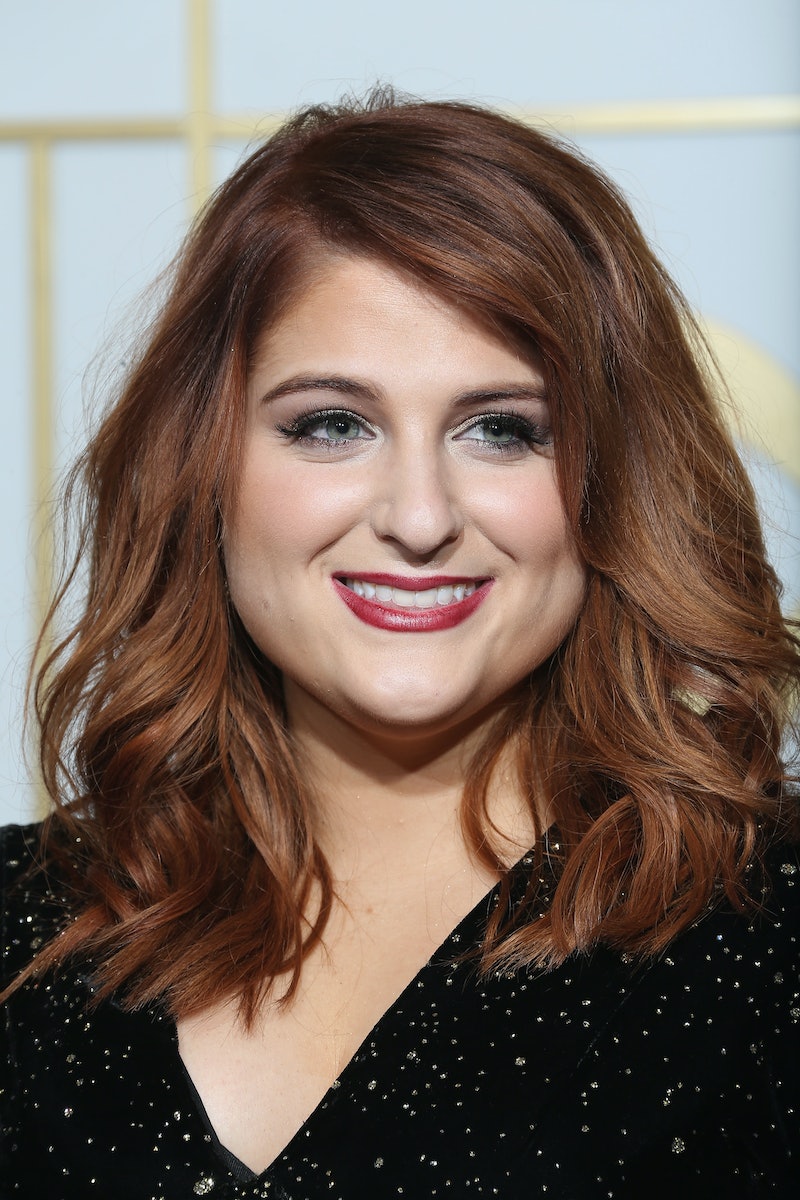 On Friday, unstoppable "All About That Bass" hit-maker Meghan Trainor premiered her new single, "NO," the lead offering from her upcoming sophomore album, Thank You (due out May 13). The R&B-infused pop anthem finds Trainor confronting a guy who won't stop coming on to her in the club: "My name is NO, my sign is NO, my number is NO, you need to let it go," she tells him during the catchy, chant-along chorus. We learned about the premise behind the Meghan Trainor "NO" lyrics several weeks ago, and now that I've heard the song in full, I'm happy to say that the 22-year-old newcomer pulls the whole thing off beautifully. Let's face it: Women deal with unwanted attention and harassment from men every day in this world — and those are not easy topics to tackle in a three-and-a-half-minute pop song!

There are a lot of ways things could've gone wrong with "NO," but fortunately, Trainor hits the ball out of the park. Her lyrics are clever, sassy, and full of attitude, but they don't make light of the situation she's facing on the crowded dance floor, which is a major part of what makes the song so successful (in my opinion, anyway). In the first verse to "NO," Trainor sings:

Call me beautiful, so original, telling me I'm not like other girls

I was in the zone before you came along, now thinking maybe you should go

In the pre-chorus, she tells women everywhere to pay attention and follow her lead:

All my ladies, listen up

If that boy ain't giving up

Lick your lips and swing your hips

Girl all you gotta say is...

The chorus, which you read a preview of above, is fantastic:

My name is NO

My number is NO

You need to let it go

You need to let it go

Need to let it go

Trainor created "NO" with the help of pop producer Ricky Reed (Jason Derulo's "Talk Dirty") and in-demand songwriter Jacob Kasher (One Direction's "Perfect"). In a new interview with Idolator, Reed shed some light on what led to "NO's" creation. Apparently, the CEO of Trainor's record label, L.A. Reid, heard the music she'd been working on for Thank You, and told her she didn't have a song strong enough to be the project's lead single yet:

I remember that [another] session for the day had cancelled and I got a text from Meghan around noon who seemed to be in a weird state. It turns out ... L.A. Reid had just heard this body of work that she had been hard at work on for a long time and told her she had no first single. She was angry and rushed over to my space. I hit up the writer genius J Kash and the three of us simply harnessed all that fiery energy she was feeling.

That "fiery energy" Reed referenced can definitely be felt when you listen to "NO." With any luck, the track will become Trainor's next big hit.

"NO" is available on iTunes and Spotify now.