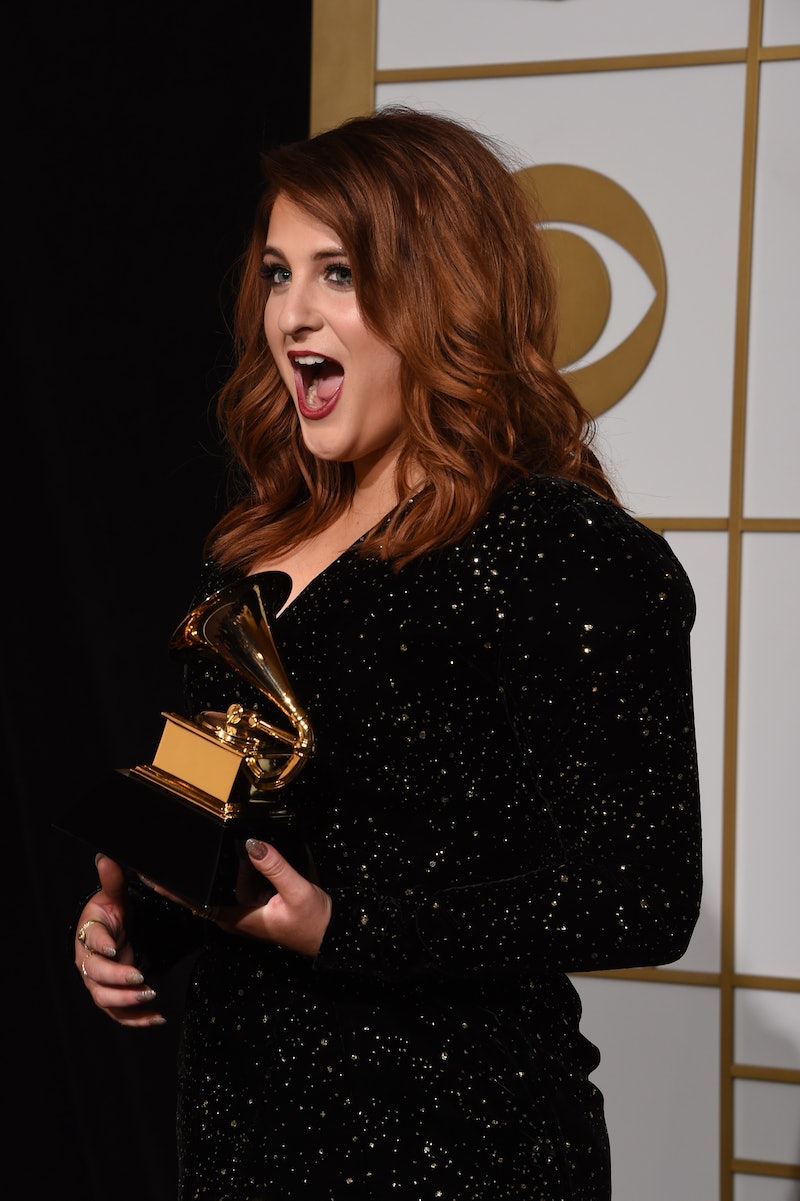 Full disclosure: I'm not Meghan Trainor's No. 1 fan. I think she's a talented songwriter, and she has a nice voice, but I only like a couple of her tunes. So, as someone who follows pop music closely, I was looking forward to the premiere of Meghan Trainor's new single "NO" — the concept behind it intrigued me — but I wasn't expecting to be bowled over by it or anything. But, strangely enough, that's exactly what happened! (Life's funny sometimes, isn't it?) Admittedly, the track's doo-wop–inspired intro made me a little nervous during my first listen ("How thrilling," I thought, "she decided to play it safe and stick to what she knows..."), but a few seconds later, I was completely sold. "NO" is an infectious R&B-pop anthem that recalls some of the best late '90s/early '00s cuts from acts like Britney Spears, *NSYNC, and even Destiny's Child — talk about unexpected!

"NO" co-writer and producer Ricky Reed spoke to Popdust recently about the song's "unexpected" sound: "It started with this dance-hall drum rhythm, and Meghan ran into the studio after an upsetting meeting with her record label [Epic Records]. We started with a rap, and that turned into a chant. Then, we brought in some funk elements. I can't even really put into words what it turned into, but it's a pretty incredible song. It is the core of the album, but more so, it is a gateway drug. It is definitely a perfect introduction to her next musical journey."

Check out "NO" via Spotify below.

ICYMI: Trainor spoke to Fuse in February about the "upsetting meeting with her record label" Reed mentioned. Apparently, Epic's CEO, L.A. Reid, listened the material she'd recorded for her sophomore album, Thank You (due out May 13), and told her he didn't think she had a lead single yet. In his aforementioned Popdust interview, Reed said Trainor channeled the frustration that resulted from this conversation into writing "NO": "[She was] angry, and we immediately started a concept for the song using that energy. ... This song is very different from what she's done before. It matches 'All About That Bass' as far as being unexpected. It's urgent and has a very strong female-forward message."

According to Reed, the rest of the songs on Thank You's tracklist will surprise us, as well: "As soon as we stumbled onto 'No,' we couldn’t turn back. We started moving into uncharted territory and trying things we would never have tried otherwise. The result is an album that is eclectic but with a focus. It is so musical and so inspiring. This album is a masterpiece."

That's a bold claim, but I'm glad to know Reed feels so confident about the project. He also revealed that the tracks on Thank You were inspired by Caribbean soca music, gospel, funk, and even Trainor's "old Nashville sound." (For a time, Trainor lived in Nashville, where she wrote songs for big country acts like Rascal Flatts and Lauren Alaina.)

"NO" has changed the way I look at Trainor's music, and it sounds like she may continue to surprise me on her new album. Believe it or not, I can't wait to hear what's next.

"NO" is available on iTunes and Spotify now.