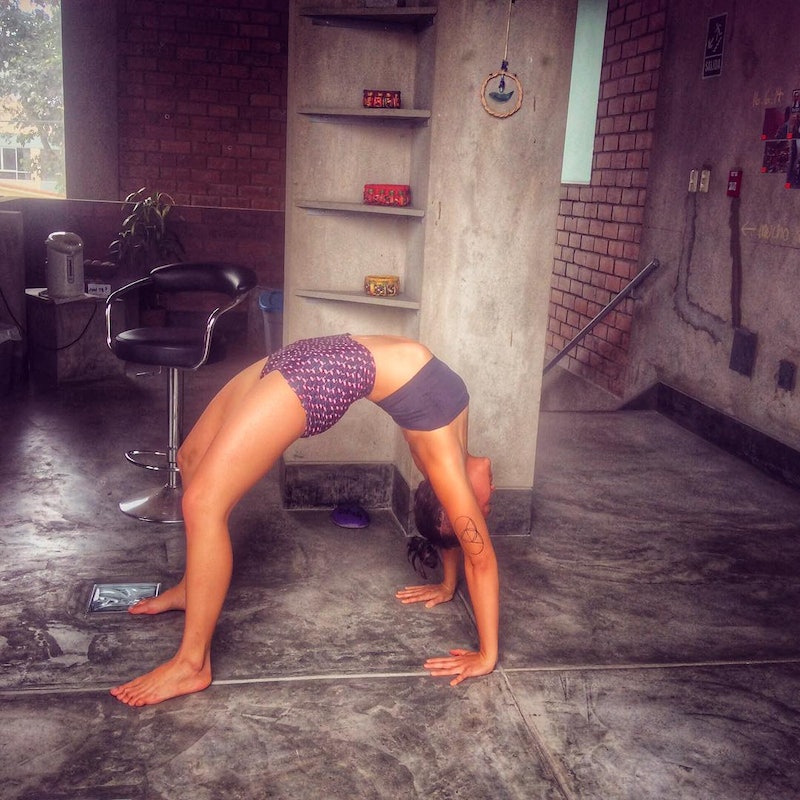 Yoga is so popular these days that it even garnered attention at a recent Republican debate, when Ted Cruz's instructions to Donald Trump to "breathe" triggered Marco Rubio to crack a joke about the ancient Eastern practice. The moment was so memorable that Cruz has created his very own yoga mats. If that's not yoga going mainstream, then I don't know what is.

I'm sure you've heard your fair share about yoga, and why it's great for your body and mind; how a regular yoga practice treats chronic neck and back pain, reduces anxiety, and boosts your self-confidence. It's even known to help you adopt more mindful eating habits. Regular practitioners scream these benefits from the rooftops, and science is on yoga's side now more than ever: in just one of many studies, in 2005, German researchers found that women who described themselves as "emotionally distressed" saw incredible changes after three months of two 90-minute yoga classes a week. Their depression scores improved by 50 percent, and their headaches, sleep quality, and back aches all took a turn for the better.

These positive side effects of yoga are great, but, believe it or not, there are more interesting benefits to yoga that might lure you. Here are seven surprising reasons why you should try yoga.

1. It Improves The Elasticity Of Your Arteries

Having a bendy body pays off in more important ways than you might think. In Japan, researchers conducted a study that proved how closely spinal flexibility is related to the flexibility of your arteries, which contributes to a healthy heart. They studied 526 adults between the ages 20-83, and in those over 40, a supple spine strongly correlated with youthful arteries.

Doing yoga activates the parasympathetic nervous system, which reduces the stressful fight-or-flight response. Researchers believe it's this specific quality that relaxes your arteries, preventing the heart from being overworked and reducing the risk for cardiovascular disease. Considering the fact that heart disease is the number one killer of women in the world today, that's quite a benefit.

Spinal flexibility doesn't happen overnight, and if you start your stretching routine now, you'll be golden by the time you reach your 40s.

2. It Slows Your Cellular Aging Process

In 2012, researchers at University of California at Los Angeles found that people who did a mere 12 minutes of yoga a day for eight weeks increased the telomerase activity in their brain by 43 percent. Telomerase has been nicknamed "the immortality enzyme," and the more of it you've got, the slower your cellular aging process takes place. Yoga: the original anti-wrinkle cream.

The aging that takes place on a cellular level is exacerbated by all the stress we're under in our day-to-day lives. Participants of this study saw a reduction in the very stress that causes you age quickly. This also resulted in less depressive symptoms.

3. It Gives You A Higher Pain Tolerance

Using sensory testing and magnetic resonance imaging techniques, a team of researchers in 2014 found that people who practice yoga have much more gray matter in their brains compared to whose who don't. This equals a higher tolerance to pain; in fact, they could put up with pain twice as long as non-yogi folk.

Apparently, the asanas you do in a yoga class provide you with "cognitive strategies... and interoceptive awareness" that help you manage physical discomfort you might encounter both inside and outside of the studio. The sensory inputs yogis have literally give them different insular brain connectivity than their counterparts.

Handling pain better than others can benefit you in all sorts of ways. It could mean you perform better athletically, or it might make your PMS cramps a little more bearable.

4. You'll Gain Upper Body Strength Without Even Trying To

If you've never tried yoga before, you might look at a picture of downward facing dog and think, Well, that looks easy. But that seemingly simple posture works every part of your arms, as well as your upper back — and you don't even realize it's happening.

If you do strength training at the gym, you have to do all kinds of different moves — bicep curls, tricep dips, etc. — to get a powerful upper body. But if you start going to yoga, you'll gain arm strength in no time. Not necessarily because the postures are harder than lifting weights, but because so many of the poses use your arms, even the ones you think are only meant for your lower body.

Take the Warrior postures, for example. You're lunging into one leg and you feel the burn in your thighs, right? Well, your arms are out the side or above your head at the same time, and you're contracting your triceps and activating your deltoids; all the while, your mind is focused elsewhere. It's a genius way for people who don't love weights to get cut, without all the extra time spent at the gym.

5. It Makes It Easier To Deal With Toxic People In Your Life

It's no secret that yoga is proven to reduce stress in your brain; it soothes the neural pathways that are causing you anxiety and evens out the chatter in your head. You leave the studio feeling more relaxed and, in a way, more emotionally stable, which is why many experts recommend doing yoga right before you have a difficult conversation with a family member or friend.

We all have at least one person in our life who is toxic, and they affect us no matter how hard we try not to let them get to us. When we fall into stressful interactions with toxic people, though, yoga-practicing minds are better equipped to handle the pressure. They react less abruptly, and all the breathing techniques their bodies inadvertently remember come in handy.

Besides, doing yoga significantly boosts levels of oxytocin, the chemical that is responsible for feeling deeply connected with other human beings; it's affectionately known as the "love hormone". Your brain also gets rushed with serotonin, which makes you content with whatever setting you find yourself in. This concoction of happy chemicals can make you a lot less likely to freak out at the people in your life that drive you crazy, because deep down inside your yoga brain, you can find some compassion for them.

6. It's A Great Workout For Introverts (Or Anyone Who Doesn't Want To Be Bothered)

Sometimes you just want to get some exercise in without having to be that social. I totally get it. Crowded gyms and cycling classes can be sensation overload when you're in this kind of mood, but a low-key yoga class allows you to get in and get out unnoticed. Besides, it can be especially stressful to try any kind of exercise for the first time. It feels like everyone is watching you. Go into the back row of a yoga class with no mirrors, though, and you're pretty much invisible to everyone.

Without the bumping dance music or borderline shrieking instructor, you don't have to worry about putting on a smiling face to blend in with the other enthusiastic people in the room. Yoga is a contemplative practice that nurtures however chill you want to be at the moment.

7. You Can Help Create The Demand That Yoga Become More Diverse, Affordable & Accessible

As a yoga teacher, it has bothered me for a long time how yoga primarily caters to white, cis, educated people of privilege. In 2002, a survey of over 31,000 yogis published by the Journal of General Internal Medicine showed that almost half of yoga practitioners made a salary of $65,000 or more. Today you'd still be hard-pressed to find a yoga studio that doesn't charge around $150 or $200 a month for unlimited membership, which is close to how much Americans spend on food every week.

The very people who could benefit greatly from yoga, though, are the ones who can't afford to go, or simply have no access to the practice. Luckily, there are more studios and organizations popping up all over the U.S. that are addressing this issue: Street Yoga in Seattle and Portland offers classes to the homeless and other underserved individuals; Yoga 4 Change in Jacksonville teaches yoga in low-income neighborhoods, drug rehabilitation centers, and schools; Yoga to the People, with locations in New York and California, only charges $10 for a single class.

Even if you can't get yourself to these specific studios and non-profits, it's good to know that the landscape is changing, and that yoga as a whole is becoming more inclusive, even if little by little. And that's a pretty good reason to at least give it a shot.