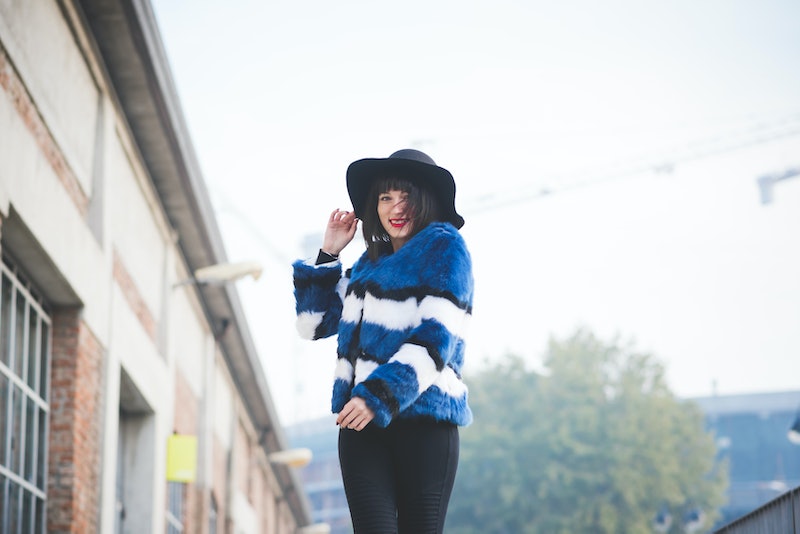 I’m single and not dating. Don’t get me wrong,I’d love to be in a relationship, but I’m honestly not fully invested into dating that I can’t go to sleep at night. Sure, having a boyfriend just for the sake of taking cute pics on Instagram would be nice, but it's not a necessity. Now, I’ve totally done the single and dating thing and it was a good time. I met a few guys, hooked up with a few more, all in an effort to “see where it goes” but it kind of became exhausting.

Maybe I’m just getting old, but my days of active dating app use and putting myself out there has been put on hold. It’s just kind of where I’m at right now. I am single, not dating, but unbelievably content. If you’re the same way, there’s nothing wrong with that.

There’s this big misconception out there that being single is an unfortunate relationship status for women — like something must be wrong with you if you’re not in a relationship. When you’re being bombarded by couples everywhere, it seems like the universe just wants to laugh in your face and drag you down. But who cares? If you’re happy, that’s all that matters. Not being in a relationship isn’t the end of the world and just because you're not seeing anyone right now, it doesn't mean you're going to die alone. Here's what nobody tells you about being single and not dating:

1. It’s Can Be A Choice That You’ve Decided To Make

Too many people associate not dating with being lonely but plenty of people choose to not date when they're single. Sometimes they're not happy with their options and sometimes they're just not interested. You can tell your friends and family to stop worrying.

2. But That Doesn’t Mean You’d Say No If Someone Interesting Came Along

Just because I’m not actively dating, it doesn’t mean I’m going to turn every guy down who approaches me. If someone came along who I really connected with, I’m open to pursuing it. I’m not going to immediately turn him into the one that got away before things got interesting. Just because I’m not actively pursuing just anyone, it doesn’t mean I’m not open to pursuing a potential right one.

3. You'll Have Plenty Of Other Things To Worry About

4. You May Save A Ton Of Money

There’s no doubt about it, dating can be expensive. According to the latest Singles in America study by Match, the average cost of a first date is around $60 to $70. Besides, when you’re single and not dating, you don’t have to worry about the stress of having birth control always on hand. That’s already a good amount of savings right there.

Dating these days can be a complete emotional rollercoaster. People like you, then ghost you, and then then want you again — until of course they realize that they’re not really ready for a relationship but want to hook up occasionally until they finally are.

I mean, the entire thing can be a complete and total mindf*ck, and you’re not even technically “with” the person. Just think of how things will be when you’re actually in a relationship. That’s where the actual work is supposed to come in. When you’re single, the only person you need to worry about is you.

5. Dating Yourself Can Be Just As Good, If Not Better, Than Dating Another Person

Just because you’re single, it doesn’t mean you can’t go out on dates. Especially with yourself. Treat yourself out. Have dinner at a nice restaurant that you’ve always wanted to eat at. Take a dance class that you’ve always wanted to learn. Go walk in the park and just immerse yourself in nature. It can be fun. Being single is a time when you can enjoy yourself and find passion in your life that doesn’t involve a bedroom.

6. Every Day Is Different

When you’re single AF, your feeling toward that very fact is like Donald Trump’s net worth — it changes depending on mood. We’re human. We’re complex. Singles, like those in relationships, can’t be categorized into two types, i.e. “single and loving it” or “single and bawling my eyes out every night.” People don’t work that way. We’re a good mix of both. There are going to be days when you’re super busy and invested in your life that you just can’t deal with another person in the picture.

Then, there are going to be days when something really great or something really not-so great happens and you just want to share it with a special someone. That’s completely OK. Just because you’re single and not dating, it doesn’t mean you have to be typecast into being either/or. You’re human and your emotions fluctuate day to day. So, don’t let anyone make you think you’re crazy for being OK with it on Monday and not OK with it on Wednesday.

7. There Are Endless Possibilities

When you’re single and not dating, there are so many possibilities. When you’re not actively swiping through Tinder for a date or going to bars every week for a hookup, you’re just out there living your life, open for what’s coming next. Because of that, you’re not forcing yourself to feel a certain way because of your relationship status. There are a lot of people in this world and a ton of potential love stories just waiting to happen. When yours does, you can enter into the relationship knowing you’ve got the best because you didn’t settle for just anyone.

More like this
Breeding Kinks Have Been On The Rise Since Roe V. Wade Got Overturned
By Lexi Inks
Are Quality Time & Gift-Receiving Love Languages Compatible?
By Lexi Inks
The 19 Best Tweets & Memes About Bisexual Awareness Week
By Lexi Inks
30 Clever Ways To Slide Into Your Crush's DMs
By Griffin Wynne, Carolyn Steber and Lexi Inks
Get Even More From Bustle — Sign Up For The Newsletter