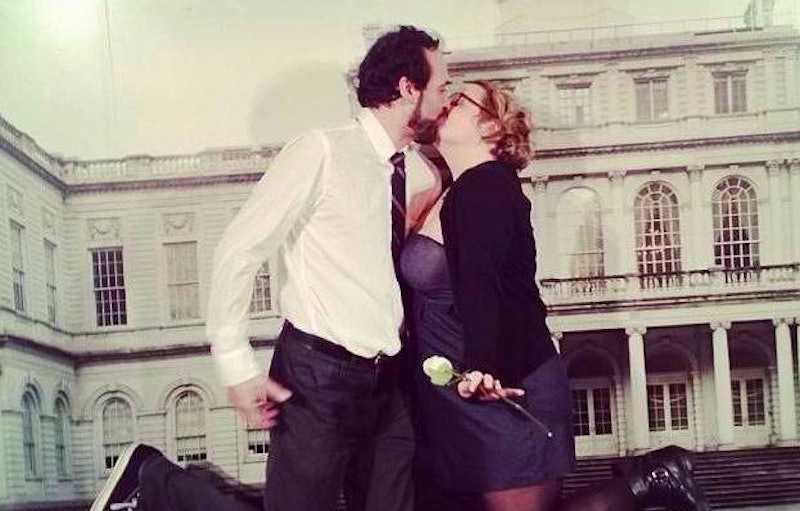 I got married in December at the City Clerk’s office in New York City. It wasn’t exactly what I had envisioned for myself but, because my now-husband is French, we needed to get the legal thing out of the way so we could get our visas. Getting legally married in New York City was far easier and quicker than it would have been in France, a country that loves its paperwork so much it's as if computers haven't been invented yet. The ceremony was less than two minutes long, and I think because of that, I don’t really feel married. It won’t seem real and official to me until we have our proper ceremony and reception in May in Paris.

While everyone close to me knew this was the plan, others weren’t privy to the details. This meant, of course, a bevy of questions after our nuptials at the marriage bureau. The first question that was asked, especially by my relatives, was what my new name was. Since it was 2013, I was moderately surprised by this inquiry. I was even more surprised when my aunts pressed the issue with my mom, “But why wouldn’t she take his name?” Not that I need to justify my reasons to anyone, but my name is exactly that: my name. Why would I change my name? What do I have to gain from something so silly? Besides, if you saw my husband’s long, fancy French last name all spelled out in its entirety, you probably wouldn’t take his name either, had you been the one who married him. Granted, it’s beautiful and very French, but it’s wordy with too many syllables, and more importantly, it’s his name. I have my own name; I don’t need to be running around acquiring names that do not belong to me.

Once that confusion blew over it was time for another a big question: When, oh when, would we be having children? I mean, as a woman in my 30’s, I should definitely know that my days are numbered when it comes to easily conceiving and having a healthy baby. Did I not know that I’m running out of time? Every single second of every single day that passes is a missed opportunity to get pregnant and have a baby! Why am I wasting my time? What am I doing that’s more important than getting knocked up and helping to keep the species alive? I’ve already thrown away so many great years of fertility, why was I not stepping up to the plate? What kind of woman doesn’t want to get pregnant ASAP after her marriage? Why even get married at all if you’re not going to have a family?

Yes, those were the questions being pelted at me from a few family members, my baby-loving sister included, and my equally baby-loving acquaintances; my friends knew better. You’d think these people would have greater concerns in their lives, but at the moment, the hows and whats of my uterus were apparently on the table for discussion. I had no idea my baby-making bits would receive almost celebrity status attention just because I signed a piece of paper one day back in December.

No, I'm not pregnant, and my reasons are manyfold. First, I don't truly feel married, so the harping on about how it's babymaking time just doesn't mesh with my mental state. Further, I am living in NYC and Olivier is living Paris. We’ll be dividing our time between the two cities as we did before we were married, but for the time being we are living in our respective cities as our spousal visas haven't come through yet. And who would want to be going through the early stages of a pregnancy when your husband is in a different country? I mean, who the hell is supposed to hold my hair back when I get morning sickness if he’s an eight-hour plane ride away? Come on, people! Let’s be realistic about this. Everyone knows I’m incapable of holding my own hair back!

But there’s an aspect to my decision to not get pregnant immediately that's a far bigger deal than the whole distance thing: I’m not particularly fond of kids. I know, I know. What sort of selfish wench isn’t fond of kids? What am I? Some sort of heartless monster? All women love kids! All women just can’t wait to have the perfect man, the perfect wedding, then the perfect rugrats about whom they’ll brag to other mothers over coffee while these aforementioned rugrats all play together, sharing their germs on an equally germ-infested swing set. Did I not get the memo? Did I not get the invitation to the baby-wanting party? Apparently not.

I've never been shy about telling people that kids just aren’t my thing. When I was profiled a couple years ago with a few other women for a piece in the New York Post about my lack of interest in having kids, I was called selfish (a term I even used freely in the piece to describe myself), and was assured that I’d change my mind when I fell in love, truly, madly, deeply in love. It would be in that moment that I’d realize that yes, I do want children, because children make women feel whole; children will make me feel complete.

But I guess the problem with that hypothesis is that I’ve never really felt incomplete. I live in a city that I love, I’m doing exactly what I set out to do for a living, I have amazing friends, an awesome dog who does lots of fun tricks, and a really supportive family. I rarely go without what I want, I’ve traveled extensively, and if we want to get materialistic, I have a pretty damn snazzy wardrobe. I am complete already. I’ve been complete for as long as I can remember. And while I like to tell Olivier he completes me (à la Jerry Maguire, of course), the fact is, I was complete when he came into my life; he just added color to my already-content existence.

Not having had children has allowed me a freedom that my friends who are mothers just don’t have. My sister is the mother to two young boys, and she occasionally complains that she needs a vacation, or just a moment’s peace. My life without children has afforded me so much peace. And it’s my choice and my freedom to live my life with Olivier without contending with the responsibilities of parenthood. There’s tremendous beauty in living your life for yourself and not for someone else. Define it as selfish or strange all you want, but it’s true. And I’m not alone in feeling this way.

So do yourself and everyone else around you a favor, baby crazy people of the world, and stop asking the newly married people in your life when they’re going to have children. We’ll let you know when we’re ready to get on the baby train, and if some of us never do, then that’s the way it goes.

I’m still not sure if I’ll ever have a child, but as with all things regarding my body, it’s a personal choice I’ll make when the time comes. Not every woman is cut out to be a mother, and you probably wouldn’t want those of us who aren’t having kids anyway. Considering the rate at which I misplace things or forget to water my plants, it's obvious that I'm not ready. And I don't know if I ever will be.

More like this
Emily Ratajkowski & Pete Davidson's Astrological Compatibility, Revealed
By Nina Kahn
Are Sagittarius & Capricorn Compatible In A Relationship? Astrologers Weigh In
By Kristine Fellizar
Wimbledon Alters All-White Kit Rule Amid Candid Period Discussions
By Catharina Cheung and Rachel Mantock
Prince William Condemns “Unacceptable” Comments Made To A Black Guest At Buckingham Palace
By Shahed Ezaydi
Get Even More From Bustle — Sign Up For The Newsletter