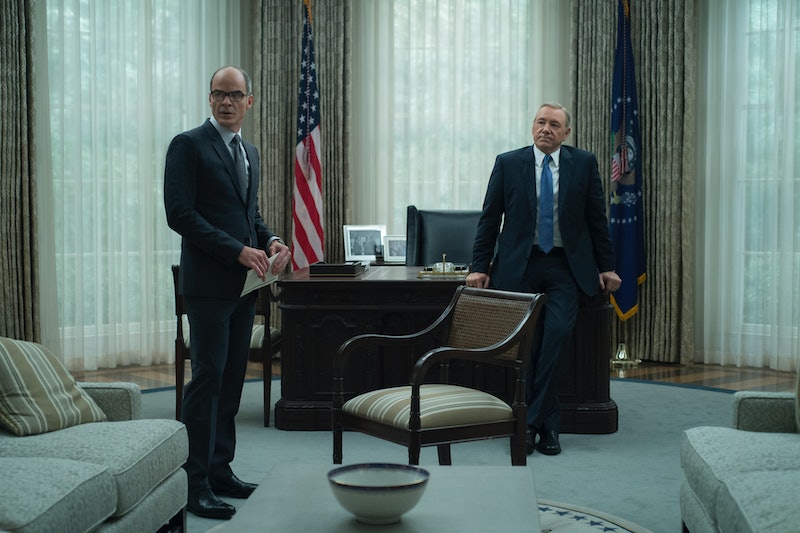 Another season, another terrible romantic partner for Doug Stamper. Major House of Cards Season 4, Episodes 1-13 spoilers ahead. The last time Doug fell for a woman, he killed her. So, you can understand why I'm concerned about the Doug Stamper and Laura Moretti romance on House of Cards. Especially because it's Doug's fault she's a widow in the first place. Let's back up a bit so I can explain exactly who Laura Moretti and her husband Anthony are.

After Frank Underwood was shot in Episode 4, he was in need of a new liver. However, even being the president doesn't kick you to the top of the donor list, so Frank was number two on the list and dangerously close to dying. Doug, who is hella obsessed with Frank, was not about to let that happen. So, Doug bullied the Secretary of Health into doing what she had to do to get Frank to be number one. It was a huge breach of ethics, but Frank did end up getting a liver, and Anthony Moretti, the original number one slot, died.

After Frank recovered, Doug was still feeling guilty about his actions, and he started being weirdly obsessed with Laura Moretti, Anthony's widow. (Can someone get Doug some stalker therapy please?) He crept through photos on her Anthony Moretti donation page and eventually donated $5000, which seems kind of low considering her husband is dead because of Doug, but whatever.

Laura, not knowing who Doug really was, called to thank him for his generosity and Doug proceeded to play her voicemail roughly a million times until he fell in love with her, basically. (Hello stalker Doug, I didn't miss you.) Eventually the pair met in person, he brought her flowers, and they began a courtship. Whether he actually likes her, or he just has a strange obsession with knowing more about her husband (he asks a lot of questions about Anthony), it's a weird relationship.

I just don't trust Doug. He killed Rachel in Season 3, and I don't want Laura to die in Season 5. Her kids deserve at least one parent. So, here's hoping Doug puts her first next season and gets the hell away from her. Sorry, Doug, but you kind of bring destruction wherever you go, and Laura deserves better.